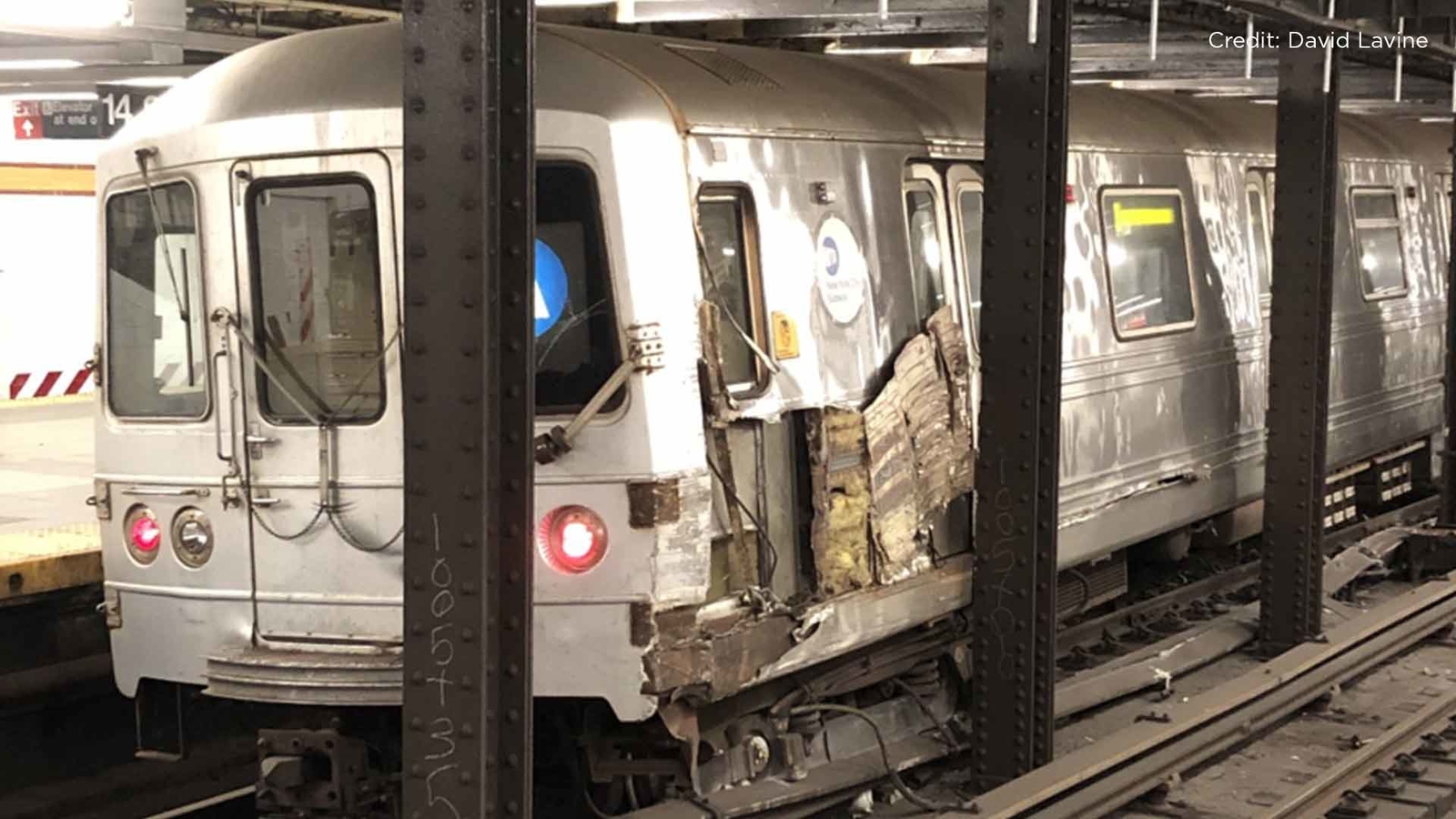 CHELSEA, Manhattan (WABC) — Police are questioning a man they say tossed debris onto subway tracks in Manhattan Sunday morning, causing a train to derail, snarling service for hours but causing no serious injuries.

The front of the northbound A train derailed on the express track at the 8th Avenue and 14th Street train station at around 8:15 a.m. in Chelsea.

Authorities described the person being questioned as a 30-year-old homeless man. They say a witness saw him throwing construction debris onto the subway tracks.
He is currently being questioned at Transit District 2, with charges pending.

“A northbound train came into contact with debris on the roadbed as it was pulling into the 14St-8th Av station resulting in a wheel leaving the track,” NYCT Interim President Sarah Feinberg said in a statement.

The two front wheelsets – four wheels in total — derailed to the west of the running rails, according to an MTA official.

The MTA says the “heroic” crew was able to stop the train and safely discharge around 135 passengers at the station.

“This was an all-hands on deck emergency with transit workers from multiple divisions responding to assist riders and then begin repairing the extensive damage. It’s a stark reminder that the MTA can’t cut its front-line workers even if the federal government fails to provide funding in a COVID relief package,” Transport Workers Union Local 100 President Tony Utano said.

A fire department spokesperson said three of the riders suffered minor injuries. One person was taken to a hospital for evaluation and the other two declined treatment.

Due to the derailment, the MTA confirmed a loss of power to all four tracks.

Additionally, another train farther up the track near 34th Street remained in the tunnel due to the power loss. About 125 passengers were stranded for a short period of time, but the crew was able to remove those customers off the train safely.

The derailed train, however, did endure significant damage.

Once police conclude with their investigation, the MTA says they will re-rail the incident train, pull the train with a diesel locomotive power pack, reassess the condition of the track before necessary corrective actions to the track components and then remove the train.

Local service will resume in both directions in the next hour or two but will bypass the 8th Avenue and 14th Street station.

NYC Transit personnel are inspecting the train and the tunnel structure and the MTA is aiming to resume normal track service by Monday morning rush hour.

I am so angry that someone did this on purpose, but so thankful that no one was seriously injured. Don’t mess with our subway–its for all of us!! https://t.co/FtEJUnOvhz

While work is underway, trains will operate on the local track from Canal St to 59th St-Columbus Circle and will bypass 14 St in both directions.