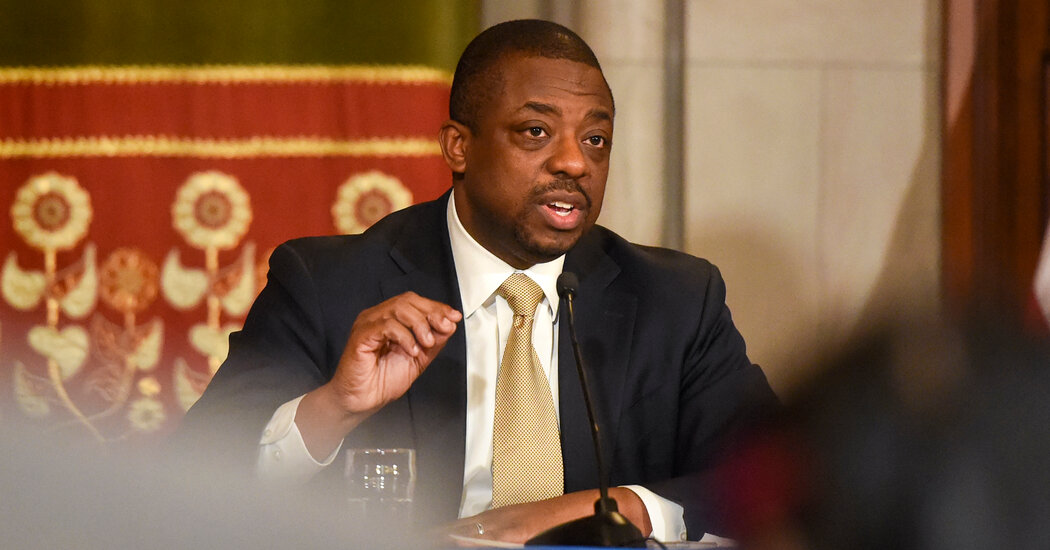 Lt. Gov. Brian A. Benjamin of New York, the state’s second-in-command to Gov. Kathy Hochul, surrendered early Tuesday morning to face a federal bribery conspiracy indictment in connection with a scheme to funnel fraudulent donations to a previous campaign, according to people with knowledge of the matter.

The indictment, the result of an investigation by the F.B.I. and the U.S. attorney for the Southern District of New York, accused Mr. Benjamin of conspiring to direct state funds to a Harlem real estate investor in exchange for orchestrating thousands of dollars in illegal campaign contributions to Mr. Benjamin’s unsuccessful 2021 campaign for New York City comptroller, the people said. The investor was arrested on federal charges in November.

The legal turmoil casts Mr. Benjamin’s political future in question, and complicates this year’s election for him and Ms. Hochul, who was catapulted into office last year after her predecessor, Andrew M. Cuomo, resigned after numerous allegations of sexual misconduct.

There is no suggestion that Ms. Hochul was aware of Mr. Benjamin’s alleged criminal conduct, which prosecutors said occurred when he was a state senator. Still, she took office last year promising to end an era of impropriety in Albany, and selecting Mr. Benjamin, 45, was among her first major decisions as governor.

Federal prosecutors and the F.B.I. were expected to announce the charges later on Tuesday, and Mr. Benjamin is scheduled to appear in United States District Court in Lower Manhattan on Tuesday afternoon.

A lawyer for Mr. Benjamin could not be immediately reached for comment.

Mr. Benjamin will almost certainly face pressure to resign from office. Even if he were to step down, he will likely remain on the ballot in June, when he faces two spirited primary challengers. Because Mr. Benjamin was designated as the Democratic Party’s nominee for lieutenant governor, his name can only be removed at this point if he were to move out of the state, die or seek another office.

Mr. Benjamin said recently that he had been cooperating with investigators, who had issued subpoenas in recent weeks to the State Senate in Albany and people who had advised his comptroller campaign. As recently as last week, the lieutenant governor and his top aides were reassuring allies in private that he expected to be cleared of any wrongdoing in the case.

But there were strong indications that the Harlem real estate investor who illegally assisted his campaign, Gerald Migdol, began providing information to investigators shortly after he was arrested on wire fraud, aggravated identity theft and other charges related to his role in the matter.

In a grand jury indictment last November, prosecutors said that Mr. Migdol began to steer thousands of dollars worth of fraudulent contributions to Mr. Benjamin in October 2019, just a month after the state senator filed to run for comptroller. They accused him of making straw donations in the name of individuals, including his 2-year-old grandchild, who did not consent to them, and of reimbursing others for the cost of their contributions.

At the time, the prosecutors did not comment on Mr. Migdol’s motive, or explicitly name Mr. Benjamin. But they said his scheme was designed to help the candidate tap into New York City’s generous public campaign matching funds program and secure him tens of thousands of dollars in additional campaign cash.

The two men were close and traded accolades at a series of charitable and political functions over the years in Harlem, where Mr. Migdol made a name for himself distributing school supplies and Thanksgiving turkeys through his charity.

State records and a Facebook photo posted by Mr. Migdol at the time show Mr. Benjamin presenting him with an oversized cardboard check for $50,000 for the charity, Friends of Public School Harlem, in September 2019. It is unclear if the funds, which were earmarked as part of a discretionary state education fund, were ever actually delivered, but they represented one of the largest outside gifts ever directed to the small charity.

A graduate of Ivy League schools, Mr. Benjamin spent much of his career in banking and affordable housing development before winning a State Senate seat representing most of Harlem in 2017.

In Albany, he was a leading proponent of criminal justice reform measures passed by Democrats after they won the majority in 2018. He finished fourth last year in the Democratic primary for comptroller.

Mr. Hochul selected Mr. Benjamin to be her lieutenant governor last August, after the resignation of Mr. Cuomo elevated her to the governor’s mansion from that position. The decision was widely seen as a way for Ms. Hochul, a white moderate from Buffalo, to expand her appeal to nonwhite voters in New York City ahead of this year’s elections.

It is unclear how carefully Ms. Hochul or her advisers vetted Mr. Benjamin before the appointment.

The duties of the lieutenant governor position vary by administration. Mr. Benjamin has kept a brisk schedule of official events in the eight months since taking office, often presiding over the State Senate and representing Ms. Hochul at events in the New York City area. As Ms. Hochul’s experience made clear, the lieutenant governor’s most important function is to step in should the governor resign or die in office.

If either were to defeat him and Ms. Hochul still prevails in her race, the governor could find herself on a Democratic ticket in this fall’s general election with a relatively adversarial running mate.