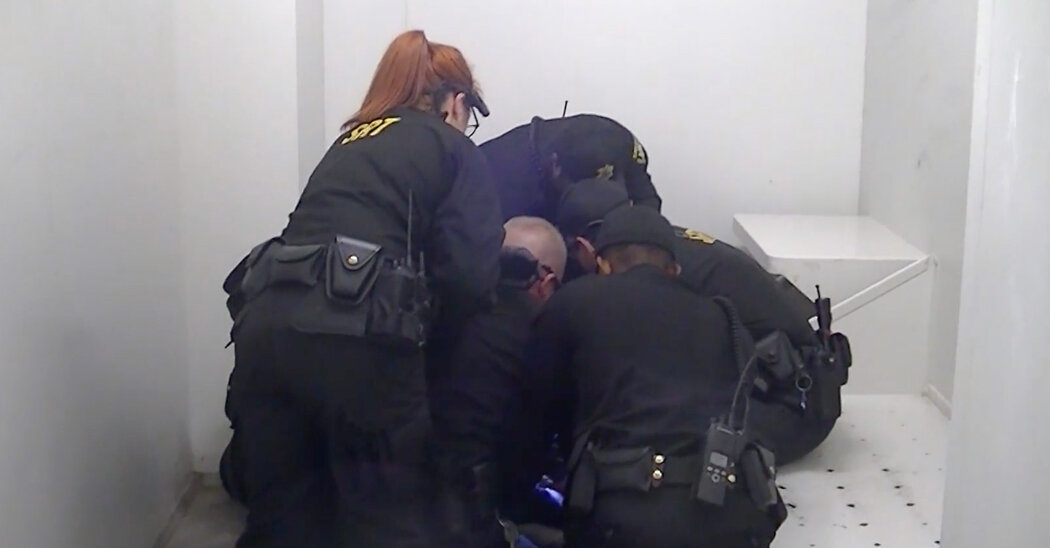 The officers then strapped him to a chair, it said, and moved him to another cell, where they lowered him onto a mattress, face down on his stomach.

The officers removed his ankle restraints and folded his legs behind his back. He pleaded: “Please,” “I can’t breathe,” “Help me” and “Let me go,” the report said.

Officers, however, could not get his handcuffs off after one key broke in the keyhole, another key wouldn’t work, and a set of bolt cutters malfunctioned.

Officers used another set of bolt cutters to remove Mr. Neville’s left handcuff after he had been on his stomach for about 12 minutes, the report said. Ms. Heughins checked him and the group left his cell, with Mr. Neville still on his stomach, according to the report.

After Ms. Heughins didn’t see him breathing or moving, the staff members went back into the cell, rolled Mr. Neville onto his back and started CPR, the report said.

The autopsy found that he had died of a brain injury because of cardiopulmonary arrest that was caused by “positional and compressional asphyxia during prone restraint.” The report said that Mr. Neville had other “significant conditions,” including “acute altered mental status” and asthma.

In August 2020, one day before officials released videos showing the episode that led to Mr. Neville’s death, the Forsyth County sheriff, Bobby F. Kimbrough Jr., apologized to Mr. Neville’s family. Mr. Kimbrough said he cried after watching a video of the encounter and said that “mistakes were made that day.” The sheriff’s office said at the time that it had fired all five of the officers.