Novak Djokovic Out of U.S. Open After Accidental Hit of Line Judge – The New York Times 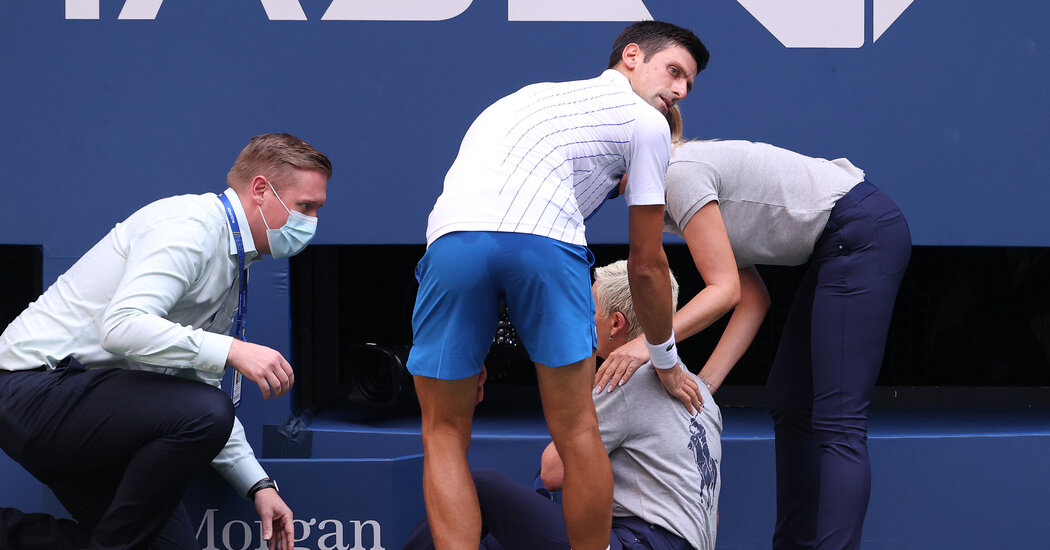 The strangest of all United States Opens got stranger still on Sunday as Novak Djokovic, the No. 1 men’s player and No. 1 seed, was disqualified from the tournament after inadvertently striking a lineswoman with a ball hit in frustration.

Djokovic was defaulted when trailing 5-6 in the first set in the fourth round against Pablo Carreño Busta. He had just lost his serve after being treated for pain in his left shoulder earlier in the game.

After losing the final point of the game, he pulled a ball from his pocket and smacked it with his racket toward the back of the court. It hit the lineswoman, who was standing, in the throat. She squealed and crumpled to the ground, and Djokovic rushed to her side to check on her condition.

She later walked off the court, still visibly in distress. But after a lengthy discussion with tournament referee Soeren Friemel at the net, Djokovic was defaulted.

“Players have been defaulted for less,” said Darren Cahill, the veteran coach who was sitting courtside in Arthur Ashe Stadium covering the match for ESPN. “I think the tournament made the right decision.”

The stunning turn of events guarantees that there will be a first-time Grand Slam men’s singles champion at the U.S. Open. Djokovic, who has won 17 major singles titles, was the only player left in the draw who had won a Grand Slam singles title.

Carreño Busta, the 20th seed from Spain, advanced to the quarterfinals with the default.

“It’s very unfortunate he hit the line judge and especially where he hit it,” said Alexander Zverev, a German player who was watching inside Arthur Ashe Stadium. “There is a rule in place for it. I think the supervisors and all of them are just doing their job but very unlucky for Novak. I think he’s going to be a little bit upset about it. I mean if he would have hit it anywhere else, if it would have landed anywhere else, we’re talking about a few inches, he would have been fine.”

Djokovic, 33, has won five of the last seven Grand Slam singles titles and had dropped just one set in his first three matches at the U.S. Open. But the first set against Carreño Busta was a tight affair.