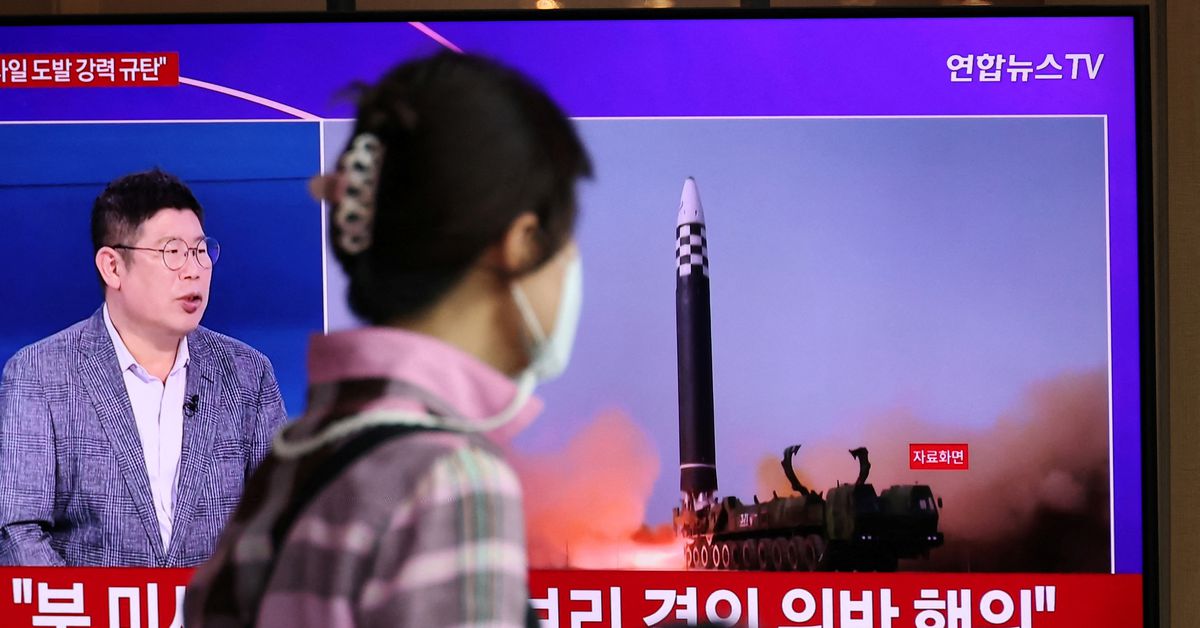 SEOUL, May 25 (Reuters) – North Korea fired three missiles on Wednesday, including one thought to be its largest intercontinental ballistic missile, after U.S. President Joe Biden ended an Asia trip where he agreed to new measures to deter the nuclear-armed state.

South Korea’s deputy national security adviser, Kim Tae-hyo, said the North also appeared to have conducted multiple experiments with a detonation device in preparation for its seventh nuclear test but that the test was unlikely to occur in the coming days.

They also put on other military shows of force such as dozens of fighter jets in an “Elephant Walk” formation, highlighting new South Korean President Yoon Suk-yeol’s harder-line policy on the North’s accelerating weapons tests.

His predecessor, liberal Moon Jae-in, staked his legacy on an ultimately unsuccessful attempt to engage with Pyongyang, but began conducting more military shows of force in the waning days of his administration this year after North Korea test-fired a string of missiles.

Yoon, inaugurated on May 10, secured promises in a summit with Biden over the weekend that the United States would increase joint military drills and deploy more “strategic assets” – typically nuclear-capable bombers, submarines, or aircraft carriers – to the region if necessary to deter North Korea. read more

“Our military’s show of force was intended to highlight our resolve to firmly respond to any North Korean provocations, including an ICBM launch, and our overwhelming capability and readiness to conduct a surgical strike on the origin of the provocation,” South Korea’s Joint Chiefs of Staff said in a statement.

North Korea has conducted a flurry of missile launches this year, from hypersonic weapons to test firing its largest intercontinental ballistic missiles (ICBMs) for the first time in nearly five years.

Washington and Seoul officials also recently warned that North Korea appeared ready to resume nuclear weapons tests for the first time since 2017, possibly during Biden’s visit, his first to Asia as president.

The South Korean joint chiefs said the three missiles were fired on Wednesday from the Sunan area of the North’s capital, Pyongyang, where its international airport has become a hub of missile tests.

A woman watches a TV broadcasting a news report on North Korea’s launch of three missiles what appeared to have involved an intercontinental ballistic missile (ICBM), in Seoul, South Korea, May 25, 2022. REUTERS/Kim Hong-Ji

The first missile appeared to be the North’s largest ICBM, the Hwasong-17, while a second unspecified missile appeared to have failed mid-flight, said Kim, the deputy national security adviser. The third missile was a short-range ballistic missile, seen as aimed at improving its nuclear delivery capability, he said.

“We think it had political intentions, to test our new administration’s security readiness … and send a strategic message to South Korea and the United States after President Biden left,” Kim told a briefing.

A military source in Seoul told Reuters that the second and third missile were believed to be KN-23 SRBMs, which were first tested in 2019 and which experts said were designed to evade missile defences by flying on a lower, “depressed” trajectory.

South Korea had described Pyongyang’s Hwasong-17 test in March as a failure, and the launch ended a self-imposed 2017 moratorium on long-range missile and nuclear testing amid stalled denuclearisation talks with Washington. read more

A White House official said that Biden, who departed Japan on Tuesday evening, had been briefed on the launches. A State Department spokesperson issued a statement urging the North to “refrain from further provocations and engage in sustained and substantive dialogue”.

“North Korea’s continued provocations will only result in even stronger, faster South Korea-U.S. deterrence, and bring deeper isolation upon itself,” Yoon’s government said in a separate statement.

South Korea and the United States have offered to send COVID-19 vaccines to North Korea, which is battling its first confirmed outbreak, and urged Pyongyang to return to diplomacy. read more

But there has been no response from Pyongyang to the diplomatic overtures or offers of aid, Biden said.

In the waning hours of Biden’s visit to the region, Russian and Chinese bombers flew joint patrols near Japanese and South Korean air defence zones on Tuesday in a pointed farewell. read more