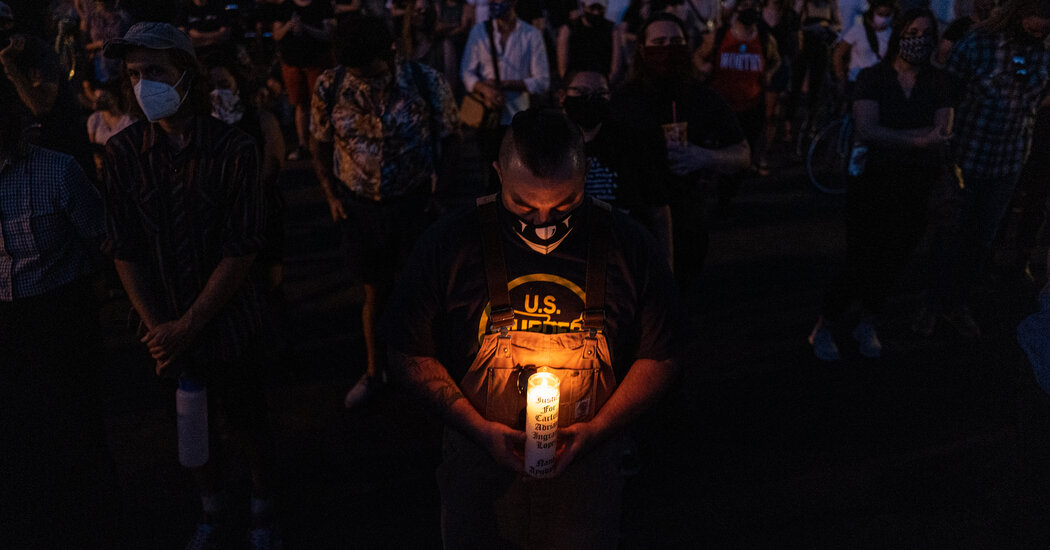 The prosecutor’s office in Tucson, Ariz., announced Monday that it would not bring criminal charges against four police officers in the April death of a 27-year-old man who — while naked, handcuffed and face down on the ground — said he could not breathe and repeatedly begged for water and called out for his grandmother.

The death of the man, Carlos Ingram Lopez, rattled the Tucson Police Department, which has long considered itself a model of progressive policing. Three officers linked to the case have resigned; in June, when body camera video from the episode was released publicly, the police chief offered his own resignation, which the mayor declined to accept.

Mr. Lopez was experiencing a mental health crisis when his grandmother called 911 for help early on April 21, officials said. What officers did in responding to Mr. Lopez may have been outside the bounds of departmental procedure, the Pima County Attorney’s Office said, but experts said it was unclear if the officers’ conduct contributed to Mr. Lopez’s death or whether he would have died without any police involvement.

Findings from medical experts were “inconclusive,” and “there is insufficient evidence to prove a crime of negligent or reckless homicide,” the county attorney’s office said in a 14-page report released Monday.

The report cited an autopsy conducted by the office of the county’s medical examiner. It concluded Mr. Lopez’s death was caused by “sudden cardiac arrest in the setting of acute cocaine intoxication and physical restraint with cardiac left ventricular hypertrophy [enlarged heart] as a significant contributing condition.” His lack of water was not a factor in his death, according to the medical examiner’s office.

The county attorney’s report examined the conduct of the three Tucson Police Department officers who were the first to arrive on the scene: Jonathan Jackson, Samuel Routledge and Ryan Starbuck. Each of them resigned after the episode.

The report also examined the conduct of a fourth officer who arrived later and helped detain Mr. Lopez, Jerin Stoor. He remains with the Police Department, officials said.

Mike Storie, a lawyer for the Tucson Police Officers Association, which represents the officers involved in the case, said he was “grateful the county attorney’s office took the time to review this matter and come to the correct conclusion.” The officers, he said, “fell short of their training, but their acts did not cause this man’s death.”

Reacting to the announcement by the prosecutor’s office, Eduardo Coronado, a lawyer for Mr. Lopez’s mother, said: “Obviously the family is very disappointed and heartbroken and in disbelief. They looked at the body-worn camera video I’ve looked at.”

“I think there is enough there” for a criminal charge, he said. “But what can you do?”

The family plans to file a civil suit against the city of Tucson, the Police Department and the three officers who first arrived at the scene, Mr. Coronado said. The family is seeking $27 million in damages, he said.

“What kind of signal does this send to the community?” Mr. Coronado asked. He feared that some people would come away thinking that “if we call the police, nothing good is going to happen.”

In the report, the Pima County Attorney’s Office said its investigation looked at potential criminality, not civil liability issues or possible violations of departmental policies. “The scope of our legal inquiry is narrow and limited,” the report said.

On April 21, police officers responded to a 911 call from Mr. Lopez’s grandmother, who said he was having a mental health crisis and yelling, intoxicated and running around the house naked, according to a news conference held in June by the Tucson police.

When officers arrived at the scene, Mr. Lopez ran into a garage, where the police handcuffed him and placed him in a facedown position for about 12 minutes, which was a policy violation, Chris Magnus, the Tucson police chief, said in June.

In body camera footage, which was released two months after Mr. Lopez’s death, he can be heard pleading for water at least a dozen times and calling out for his grandmother. The officers repeatedly told him to calm down and ignored his requests for water, and one officer threatened to use a Taser on him, according to the video.

Mr. Lopez’s face was covered by a mesh spit guard, and officers placed plastic blankets on his body. Later in the video, he stopped speaking and appeared to stop moving. He went into cardiac arrest and was declared dead at the scene by emergency medical officials, Chief Magnus said in June. Officers administered CPR and gave him two doses of Narcan before medics arrived.

The report from the Pima County Attorney’s Office questioned some of the police conduct, noting, “There is no explanation as to why the officers failed to call paramedics” or why they failed to put him “into a ‘recovery position’ as soon as he was restrained in handcuffs.”

Still, the report said that experts could not determine whether putting him into the recovery position earlier or calling paramedics earlier would have changed the outcome.

Chief Magnus offered to resign when he publicly released the video in June. It is not clear why officials waited two months to release details about Mr. Lopez’s death in April. A lawyer for his family told The New York Times in June they immediately requested video of the episode.