No Charges Against Police in Amir Locke Shooting 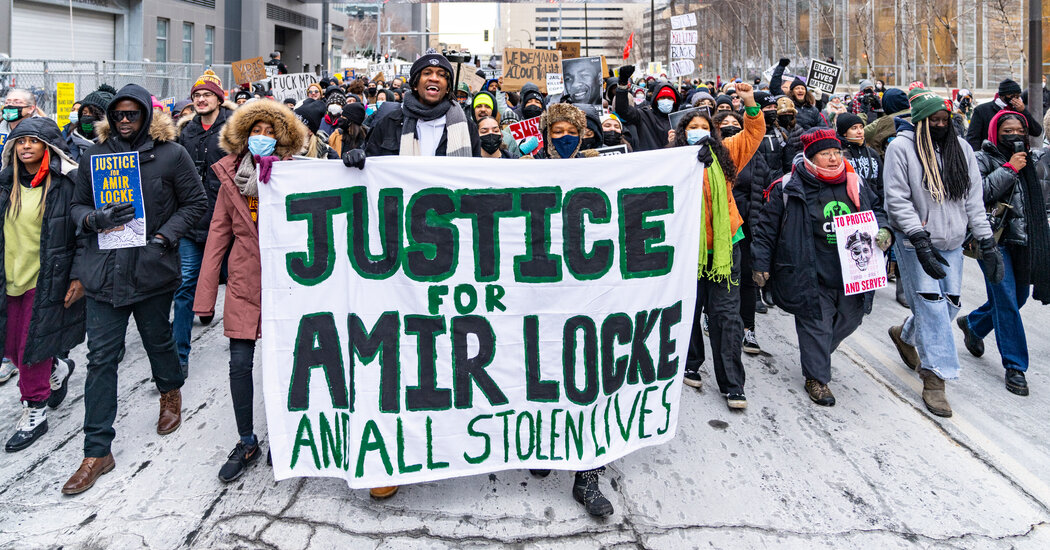 At a news conference in New York on Wednesday, Karen Wells, Mr. Locke’s mother, stood next to Mr. Crump and the Rev. Al Sharpton and addressed the officer who killed her son: “The spirit of my baby is going to haunt you for the rest of your life.”

She also delivered pointed remarks directed at Mayor Jacob Frey, over his management of the department and over the city’s surge in violent crime, which, she said, led Mr. Locke to obtain a gun for protection.

“My son was protecting himself, thinking he had to protect himself from all the crime that is out of control, Mayor Frey, the mayor of Minneapolis, that you can’t control,” she said. “So my son decided that if he’s going to go back and forth and do Instacart and DoorDash, he needed to bear arms, the legal way.”

That Mr. Locke was killed as police officers used a no-knock warrant, a law enforcement tactic that was heavily criticized in the wake of the police killing of Breonna Taylor in Louisville, Ky., in 2020 during a botched raid, only added to the anger in Minneapolis.

Mr. Frey had already limited the use of no-knock warrants, but the killing of Mr. Locke drew accusations that the mayor had misled the public during his campaign for re-election last year when he claimed to have banned such warrants. In response to Mr. Locke’s killing, the mayor issued a new policy this week, which prohibits no-knock warrants and requires officers to knock and announce their presence, and then wait, before entering a building.

“This policy is among the most forward-looking and extensive in the nation, and will help keep both our residents and officers safe,” Mr. Frey said in a statement.

Just as Mr. Wright was killed during the trial last year of Derek Chauvin, the officer who was convicted of murdering Mr. Floyd, the killing of Mr. Locke occurred during a federal trial in St. Paul, Minn., for the other three officers involved in Mr. Floyd’s death. Those three officers were all found guilty of violating Mr. Floyd’s constitutional rights.