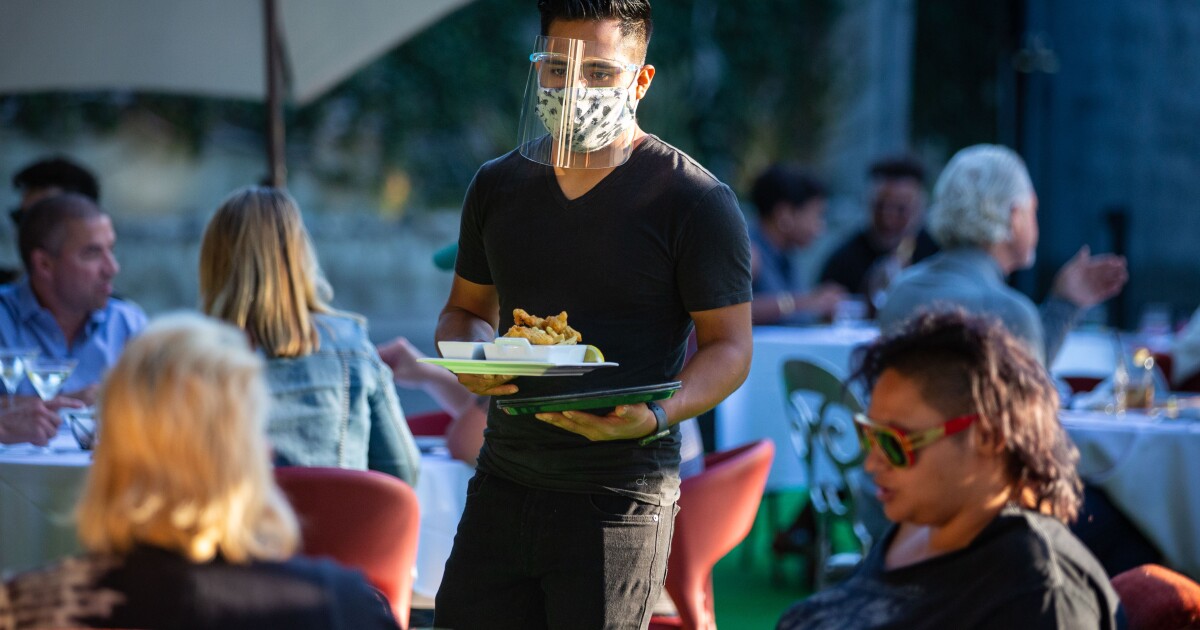 Gov. Gavin Newsom unveiled a new plan on Friday to rekindle a California economy decimated by the COVID-19 pandemic, a four-tier system in which counties must show consistent success in stemming the transmission of the coronavirus before allowing businesses greater flexibility to reopen and group activities to resume.

In doing so, Newsom appears to be taking a far more cautious approach than his first effort in the spring, when his decision to rapidly ease restrictions led to such a major surge in cases that it forced another statewide shutdown.

“We’re going to be more stubborn this time,” Newsom said during a news conference Friday in Sacramento. “This more stringent, but we believe more steady approach.”

For most of California, the new rules won’t result in many immediate changes, since restaurant dining, religious services, gyms and fitness centers, movies theaters and museums will remain restricted to outdoors only in the vast majority of counties in the state.

But beginning on Monday, hair salons and barbershops can open statewide, including indoors if they adhere to requirements for social distancing, and employees wear masks and follow other health-related mandates. All retail stores and shopping malls also are permitted to open at a maximum of 25% capacity, state officials said.

Counties will be allowed to ease restrictions in progressive stages, slowly granting Californians the everyday freedoms they enjoyed before the outbreak if virus transmission wanes in their counties. Unlike last time, the governor said the decision to grant counties the ability to open businesses will be based entirely on data showing the spread of the virus among residents.

The criteria for each tier will be uniform for all 58 counties in California, and the vast majority of counties — including all Southern California counties except San Diego — will begin in the first and most restrictive tier.

For example, restaurants in counties in Tier 1 will be allowed only to serve customers outdoors. Once a county moves into Tier 2, restaurants can serve customers indoors, but only at 25% capacity. At Tier 3, 50% capacity and at Tier 4 full capacity, as long as social distancing and other safeguards are in place.

The new rules also provide a new pathway toward the partial reopening of schools in some communities. School officials in the 20 counties listed in the state’s new structure as having “substantial,” “moderate” or “minimal” virus transmission will be able to offer limited in-person instruction on school campuses once those counties maintain that status for at least 14 days. Counties with even fewer incidences of confirmed COVID-19 cases and lower test positivity rates could allow students to return to campus part time even earlier.

But the impact of the new rules on K-12 education, for now, is minimal. Most counties would still not be allowed to offer in-person instruction for K-12 students. Those that can move forward are subject to rules rolled out by Newsom last month, where outbreaks can close individual classrooms on a campus or — if more substantial — an entire school district.

The new system will be based on averages of new cases each day per 100,000 residents and the percentage of positive cases compared to the overall number of tests conducted.

The reopening rules require counties to wait at least 21 days before moving to the next reopening tier (some counties may be eligible to move out of the first tier sooner at the outset). If a county has met reopening metrics for the next stage for at least two continuous weeks, they will be allowed to progress to the next stage when the 21-day wait period expires. Otherwise they will be required to remain in place until they meet the benchmarks for the next tier for two straight weeks. Counties that fail to meet the metrics for their current tier for two consecutive weeks will be required to move to a more restrictive tier, according to the governor’s office.

The governor’s office said the metrics will be reported as seven-day averages calculated every Tuesday but will be based on data from a full week earlier to give counties time to provide up-to-date information.

“I like this new framework because of the clear guidance on which and when each business sector is able to reopen,” said Orange County Health Care Agency Director Dr. Clayton Chau.

Chau said he has asked the state to clarify how the new system will affect efforts to resume in-person education.

Newsom’s decision to replace his original reopening plan from the spring comes after he faced criticism for allowing counties to reopen too quickly.

That plan, which was announced in May, relied on local officials to attest to their own readiness to reopen. But instead of requiring counties to meet the benchmarks outlined in his plan, Newsom permitted dozens of counties to move forward as long as local officials said they could increase testing capacity or train more contact tracers in the weeks and months after businesses opened their doors again.

The virus surged, counties weren’t prepared to conduct the necessary case investigation and contact tracing, and California and other states around the country experienced a massive testing shortage.

“It collapsed the effectiveness of our efforts to kill the virus,” state Sen. Steve Glazer (D-Orinda) said of the governor’s deferral to counties during the first reopening. “It’s too easy for local officials to acquiesce to the allure of making choices that people like and avoiding the anger that comes from telling people things they can’t do.”

In the past, Newsom has blamed the outbreak on county officials. He said the state allowed counties to reopen only if officials could prove that COVID-19 hospitalizations had stabilized, medical centers, nursing homes and other essential services had adequate protective equipment, and that they were prepared to accommodate and care for a surge in patients affected by the virus. Adherence to those reopening standards was the responsibility of the counties, not the state, Newsom said.

In recent weeks, counties have complained about the lack of instructions and communication from the governor and California Department of Public Health about the path forward. Thirty-four counties that were on the state’s monitoring list as of Friday morning have been forced to close businesses after local reopenings resulted in increased community spread of COVID-19, increased hospitalizations or limited hospital capacity.

But another nine counties lowered the spread of the virus and were taken off the watchlist, only to find themselves in limbo awaiting Newsom’s new instructions about when and how they could begin to reopen businesses.

The delayed information from the Newsom administration, which left some counties in the lurch for nearly two weeks, added to a growing frustration among local officials over sometimes incomplete directives and poor communication from Sacramento since the pandemic began.

Los Angeles County has remained on the state’s watchlist since it was announced in June, but the number of overall cases continues to decline on a weekly basis.

The number of cases in L.A. County, which totals more than 237,000 and accounts for the bulk of the state’s total infections, surged in June after the county rapidly reopened various sectors of the economy after months of closures. Transmission related to Memorial Day weekend activities and other informal gatherings also contributed to an increase in cases throughout the state.

At the same time, mass protests over the death of George Floyd erupted. Officials have said that those outdoor demonstrations did not contribute to the massive surge in new coronavirus infections. Still, it is impossible for officials to trace cases that originate in public spaces.

The statewide surge in cases and hospitalization continued after the Fourth of July weekend, followed by a case reporting backlog that sent daily infections into record territory. Those numbers have just begun to decline in recent weeks, as has the number of hospitalizations in California.

The state’s new guidelines come as protests have once again emerged after police shot and wounded a Black man in Wisconsin, Jacob Blake, and as Labor Day approaches.