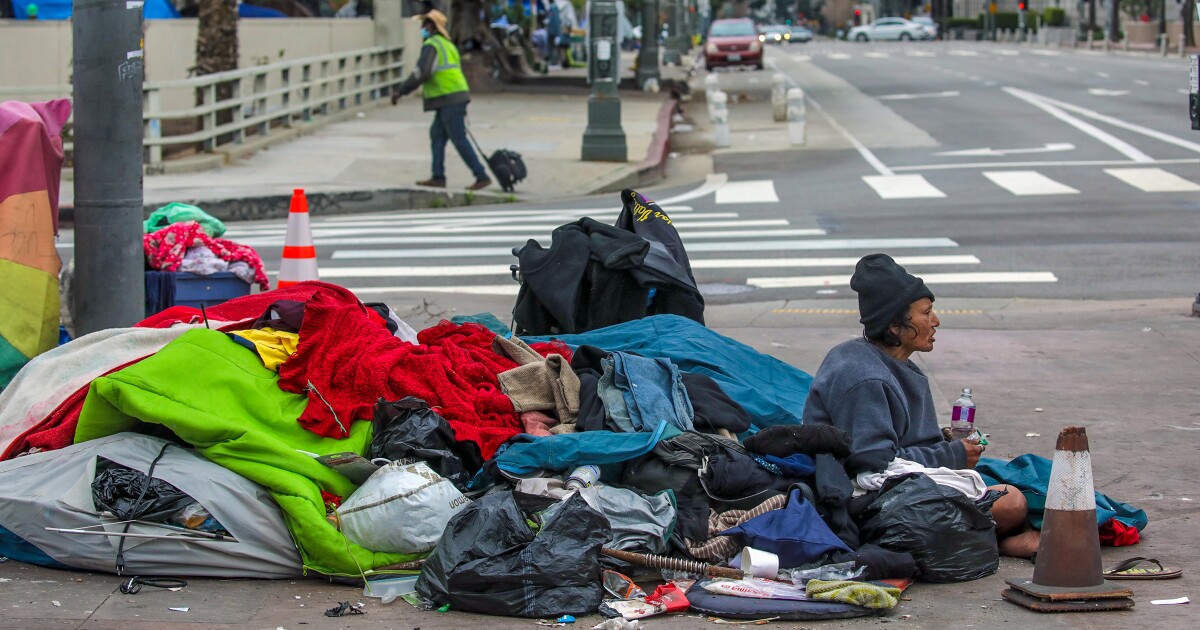 As California cities struggle to address a homelessness and mental health crisis on their streets, Gov. Gavin Newsom’s administration on Thursday unveiled a proposal to push more people with severe psychiatric disorders and addiction issues into court-ordered care that includes medication and housing.

The proposal, which Newsom is calling the Community Assistance, Recovery and Empowerment Court, is the state’s latest effort to address one of California’s greatest struggles, and a recognition that something more robust is needed to solve the problem. Newsom allocated $12 billion for homelessness in the state budget last year and proposed another $2 billion in his January financial blueprint.

But implementing a court-ordered response to mental illness and substance abuse disorders would accelerate the state’s multipronged strategy to help thousands of people get much-needed services, while acknowledging that the current system is not working as it should.

“Rather than reforming in the margins a system that is foundationally and fundamentally broken, we are taking a new approach,” Newsom said during a Thursday news conference. “We are offering a new strategy and new partnerships. But we are offering it in a way that we haven’t in the past, and that’s with resources.”

Newsom said that the plan aims to address the urgency and magnitude of the homelessness crisis, and contains accountability provisions to ensure people follow the program.

“This is about accountability, but it is about compassion, and it’s about recognizing the human condition,” he said.

All of California’s 58 counties would have to participate in the program through their civil courts, and local governments could face sanctions if they don’t comply with its requirements. A person would not have to experience homelessness to participate in CARE Court, and families, clinicians, counties, behavioral health providers and first responders could all ask judges to implement a plan. To determine if someone qualifies for a CARE plan, a judge would have to order a clinical assessment.

Participants could include those who were just arrested and released, or are exiting a short-term involuntary hospital hold. A plan could be ordered to last for 12 months, with the possibility of a 12-month extension. If unsuccessful, a participant could instead be hospitalized or ordered into a conservatorship. Criminal cases that were paused while participants entered CARE Court could then resume if the plan didn’t work.

Conservatorships, which are usually reserved for those with serious mental illnesses, hand legal decision-making power to someone else. The practice is highly controversial, and some critics argue that it unfairly strips people of their rights, while proponents claim it is often the best option for those experiencing crisis. The Newsom administration said CARE Court instead would emphasize “individualized interventions” through a “client-centered approach,” and participants would have access to a public defender and a care team throughout the process.

On a Thursday call with reporters, administration officials said the new program aims to save lives and prevent incarceration and homelessness among the state’s most vulnerable residents through a modernized approach that doesn’t default to conservatorship.

“CARE Court is really not a replacement for conservatorship,” said Jason Elliott, Newsom’s top advisor on housing, adding that it is a “new tool.”

Dr. Mark Ghaly, California’s health and human services secretary, said the plan would help alleviate “one of the most heartbreaking, heart-wrenching and yet curable challenges that we face in our communities and on our streets.”

“For a community, a population of individuals who lives in the shadows, lives often without voice, today is about lifting them up and prioritizing their needs,” Ghaly said.

Jessica Cruz, executive director of the California chapter of the National Alliance on Mental Illness, said the proposal is something for which families have advocated for years.

Cruz also said that the CARE Court framework not only presents an alternative to conservatorship, but would also give new hope for those who haven’t had success with prior treatment.

“It’s a different road for people, a different door that people can really open that has never been unlocked before,” Cruz said.

Ghaly said the new program will focus on clinical services for people experiencing psychotic disorders such as schizophrenia, along with treatment plans for substance abuse disorders. Another important element of the plan is providing housing services, Ghaly said.

In response to the announcement, however, the California State Assn. of Counties in a statement raised concerns with the proposal, including that it contains sanctions.

“Building off of past collaborative successes between the state, counties and cities is important. Counties are all in to do our part to solve homelessness and rebuild behavioral health infrastructure. Sanctions are not the way to do it,” said Graham Knaus, the association’s executive director, in the statement.

The association also warned that behavioral health infrastructure has suffered from decades of insufficient funding. While CARE Court would help a “narrow population,” the association wrote, more housing and systemic change is needed, which means the program “will have limited success.”

Though the plan so far is just a policy framework, the administration said it is working with the Legislature on a bill that would codify the proposal. Newsom also said CARE Court could be included in the budget, which would be the fastest way to implement it. The deadline to pass legislation is Aug. 31, but the Legislature approves the budget each year in June.

Elliott said it is imperative that lawmakers work quickly to pass legislation so the plan can become law.

“We don’t have any time to waste here,” Elliott said.