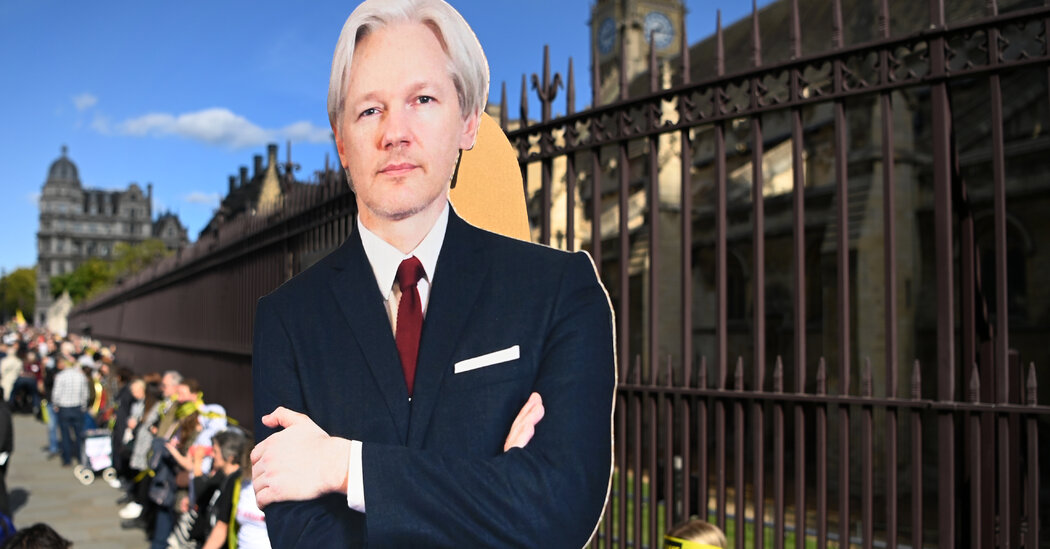 WASHINGTON — The New York Times and four European news organizations called on the United States government on Monday to drop its charges against Julian Assange, the WikiLeaks founder, for obtaining and publishing classified diplomatic and military secrets.

In a joint open letter, The Times, The Guardian, Le Monde, Der Spiegel and El País said the prosecution of Mr. Assange under the Espionage Act “sets a dangerous precedent” that threatened to undermine the First Amendment and the freedom of the press.

“Obtaining and disclosing sensitive information when necessary in the public interest is a core part of the daily work of journalists,” the letter said. “If that work is criminalized, our public discourse and our democracies are made significantly weaker.”

Mr. Assange, who has been fighting extradition from Britain since his arrest there in 2019, is also accused of participating in a hacking-related conspiracy. The letter notably did not urge the Justice Department to drop that aspect of the case, though it said that “some of us are concerned” about it, too.

Each of the five organizations had worked with Mr. Assange in 2010 and 2011, during the events at the heart of the criminal case. WikiLeaks, which obtained leaked archives of classified American diplomatic cables and military files, gave early access to the troves to traditional news outlets, which published articles about notable revelations.

A spokeswoman for The Times, Danielle Rhoades Ha, said that the company’s publisher, A.G. Sulzberger, in consultation with the legal department, decided to sign the letter. The newsroom was not involved, she said.

The case against Mr. Assange is complicated and does not turn on the question of whether he is considered a journalist, but rather on whether his journalistic-style activities of soliciting and publishing classified information can or should be treated as a crime.

The letter comes as Attorney General Merrick B. Garland has sought to rein in ways in which the Justice Department has made it harder for journalists to do their jobs. In October, he issued new regulations that ban the use of subpoenas, warrants or court orders to seize reporters’ communications records or demand their notes or testimony in an effort to uncover confidential sources in leak investigations.

Mr. Assange and WikiLeaks catapulted to global fame in 2010 when he began publishing classified videos and documents related to the United States’ wars and its foreign relations.

It eventually became clear that Chelsea Manning, a former Army intelligence analyst, had provided the archives to WikiLeaks. She was sentenced to 35 years in prison after a court-martial trial in 2013. President Barack Obama commuted most of her remaining sentence shortly before leaving office in January 2017.

Ms. Manning’s disclosures amounted to one of the most extraordinary leaks in American history. They included about 250,000 State Department cables that revealed many secret things around the world, dossiers about Guantánamo Bay detainees being held without trial and logs of significant events in the Afghanistan and Iraq wars that divulged, among other things, that civilian casualties were higher than official estimates.

The letter noted that the same five institutions had publicly criticized Mr. Assange in 2011 when unredacted copies of the cables were released, revealing the names of people in dangerous countries who had helped the United States and putting their lives at risk. At Ms. Manning’s trial, prosecutors did not say anyone had been killed as a result, but officials have said the government spent significant resources in getting such people out of danger.

While the Obama administration and career law enforcement and national security officials disliked Mr. Assange, transparency advocates and antiwar activists treated him as an icon.

His public image shifted significantly after WikiLeaks published Democratic emails that had been hacked by the Russian government as part of its covert operation to help Donald J. Trump win the 2016 presidential election. But the criminal case against him is not about the Democratic emails.

The open letter notes that the Obama administration had weighed charging Mr. Assange in connection with the Manning leaks but did not do so — in part because there was no clear way to legally distinguish WikiLeaks’ actions from those of traditional news organizations like The Times that write about national security matters.

But in March 2018, under the Trump administration, the Justice Department obtained a sealed grand jury indictment against Mr. Assange. Initially, the charges sidestepped issues of press freedom, narrowly accusing him of a hacking-related offense by offering to help Ms. Manning mask her tracks on a secure computer network.

Under Attorney General William P. Barr, the department later escalated the case by obtaining an additional indictment that included a second set of allegations: that his journalistic-style activities violated the Espionage Act, a World War I-era law that makes the unauthorized retention and dissemination of national security secrets a crime.

(Another indictment expanded the allegations attached to the hacking-related charge, to include a broader WikiLeaks effort to encourage hackers to obtain secret material and provide it to the group.)

There is no precedent in the United States for prosecuting a publisher of information — as opposed to a spy or a government official who leaked secrets — under the Espionage Act. The Trump administration’s decision to bring such charges against Mr. Assange raised novel and profound questions about the meaning of the First Amendment.

For now, those issues have not been tested in court because the case is paused while Mr. Assange fights extradition. But the open letter called on the Justice Department to drop the Espionage Act charges.

“Holding governments accountable is part of the core mission of a free press in a democracy,” the letter said.