Newport News School Was Warned 3 Times That 6-Year-Old Had a Gun, Lawyer Says 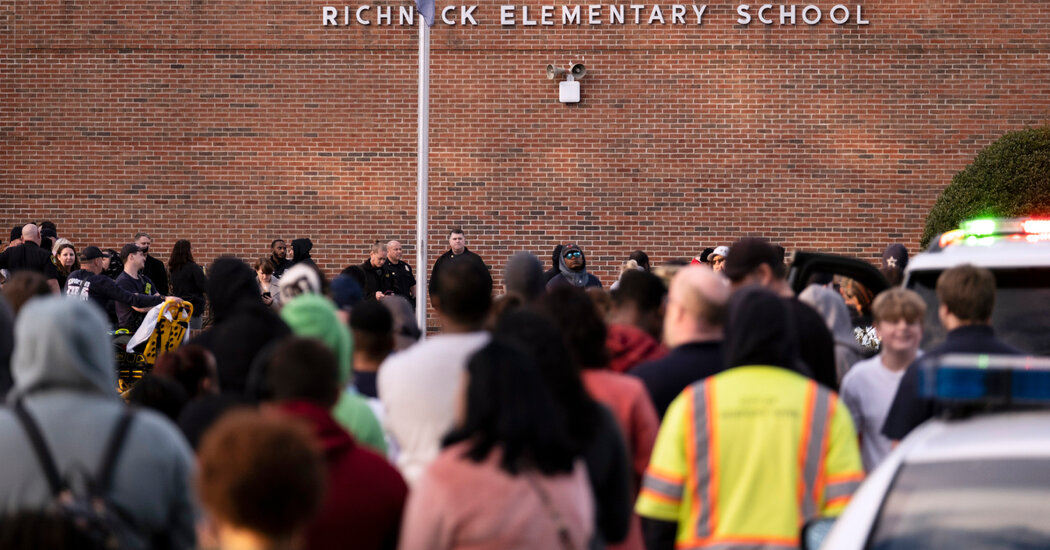 NEWPORT NEWS, Va. — In the hours before a 6-year-old boy shot his first-grade teacher in Virginia this month, school leaders were warned three times that the boy might have a gun, a lawyer for the teacher said on Wednesday, including an account from another child at the school who tearfully reported that the boy had shown him the gun at recess.

The lawyer, Diane Toscano, announced the teacher’s intent to file a lawsuit against the school district in Newport News, Va., laying out a series of escalating warnings that unfolded on the day of the shooting, when the police say a 6-year-old boy took his mother’s gun from home, brought it to Richneck Elementary School and fired at his teacher, Abigail Zwerner.

The shooting has shaken the community, raised alarms about rising gun violence in schools in the United States and led to visceral demands for accountability from parents and educators in Newport News, where the school board will meet to decide the fate of the superintendent on Wednesday night.

A spokeswoman for Newport News Public Schools declined to comment on the lawyer’s statement and timeline of events, citing an ongoing investigation.

On the day of the shooting, a teacher had searched the boy’s backpack, believing that he might have a gun, Ms. Toscano said. No gun was found, but the teacher reported to the school administration around 12:30 p.m. that she believed the boy had put the gun in his pocket before going outside for recess. Instead of searching the boy, Ms. Toscano said, an administrator dismissed the threat, saying that the 6-year-old “has little pockets.”

Around 1 p.m. — about an hour before the shooting — another teacher reported that a student had come to the teacher crying, saying that the 6-year-old had shown him the gun at recess and threatened to shoot the student if the student told anyone, Ms. Toscano said.

A third employee asked for permission to search the boy, Ms. Toscano said, but was told to wait, because the school day was almost over.

By around 2 p.m. in front of his classmates in their first-grade classroom, the boy pointed the gun at Ms. Zwerner and fired, the police said.

Ms. Zwerner, 25, was shot in the chest, and a bullet remains lodged in her body, according to her lawyer, who said that her client was beginning a long journey of physical and psychological recovery.

“Three weeks ago, Abby was a cheery young woman with a big heart and loved educating young people — she had a very bright future and a career she loved,” Ms. Toscano said. “Today, she is between surgeries and physical therapy appointments, with a career in question. How could anyone find the courage to confidently face a class of students again?”

The case — which sits at the nexus of guns, mental health and public education in America — has brought out raw emotions in Newport News, where parents and employees complained to the school board last week of growing behavioral problems among students in the district and of their fears over school shootings. In September 2021, two 17-year-olds were injured in a shooting at Heritage High School; two months later, a 17-year-old was killed outside Menchville High School.

Nationwide, schools have faced an uptick in behavioral problems and mental health challenges among children during the pandemic. The number of shootings at schools has also been on the rise.

The case also brings to the forefront tensions over how schools can serve students with serious behavioral and emotional needs, while also supporting teachers and educating all students.

The family of the 6-year-old has said that he has an “acute disability” and that his mother or father had previously been attending school with him each day. The week of the shooting — just after the holidays — was the first time that a parent had not been in class with him, the family said.

The student had previously threatened to light a teacher on fire and, in one incident, threw furniture and other items in class, leaving other students frightened, according to The Washington Post. On the day of the shooting, Ms. Zwerner reported to the school that the boy had threatened to beat up another child, her lawyer said.

Many questions remain unanswered, including how exactly the boy was able to access to the gun, and whether a parent may be charged.

Virginia law prohibits leaving a loaded gun where it is accessible to children under 14, a crime that is punishable as a misdemeanor.

“On behalf of the family of the child, we continue to pray for Ms. Zwerner and wish her a complete and full recovery,” Mr. Ellenson said in a statement on Wednesday. “Our hearts go out to all involved.”

It is also unclear who at the school had knowledge of the warnings. Richneck Elementary, which has been closed since the shooting, has a new administrator who is leading the school’s reopening.

School district officials announced plans earlier this month to install metal detectors in all school buildings, but the community has quickly called for more — and demanded accountability from the top. The school board is scheduled to meet Wednesday night to vote on ending the contract for the superintendent, George Parker III.

Last week, at a packed school board meeting, emotions spilled over as parents and employees unleashed their concerns — over disruptive student behavior and the need for more discipline; a culture that they say fails to listen to employees and families; a lack of resources for students struggling with behavioral challenges; and perhaps most of all, the daily fear about whether their children will be safe at school.

One mother, holding back sobs at the microphone, described asking the school district about security after the shooting in Uvalde, Texas, last year, and described the terror her children feel during live-shooter drills at school.

“My 7-year-old daughter says that she sits with her head down and cries,” she said, “because she wonders if she will be able to hug her mommy again.”