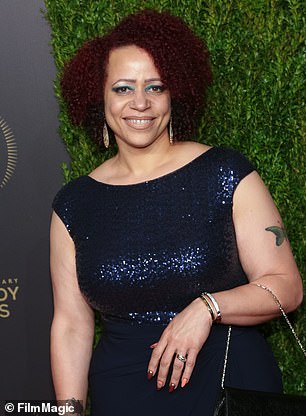 Nikole Hannah-Jones, who founded the 1619 Project last year, responded to Trump’s speech downplaying the historical legacy of slavery in the United States

The founder of The New York Times’ 1619 Project has hit back at President Trump after he downplayed the historical legacy of slavery in the U.S. and called for a ‘patriotic curriculum’ to be taught at public schools.

During his speech marking the 233rd anniversary of the signing of the Constitution on Thursday, Trump announced he will soon sign an order to promote patriotic education through an initiative dubbed the ‘1776 Commission’.

The panel, he said, would be tasked with encouraging educators to teach students ‘about the miracle of American history’ and plan for the commemoration of the 250th anniversary of the signing of the Declaration of Independence.

He argued that America’s founding ‘set in motion the unstoppable chain of events that abolished slavery’, but he did not mention how it went on for 246 years, including the 89 years after the 13 colonies declared independence from England.

The new education initiative appeared to be an attack on The New York Times’ 1619 Project, launched by journalist Nikole Hannah-Jones in 2019, highlighting the long-term consequences of slavery and the contributions of black Americans.

The title of it refers to the year a ship arrived on American soil carrying the first enslaved Africans. 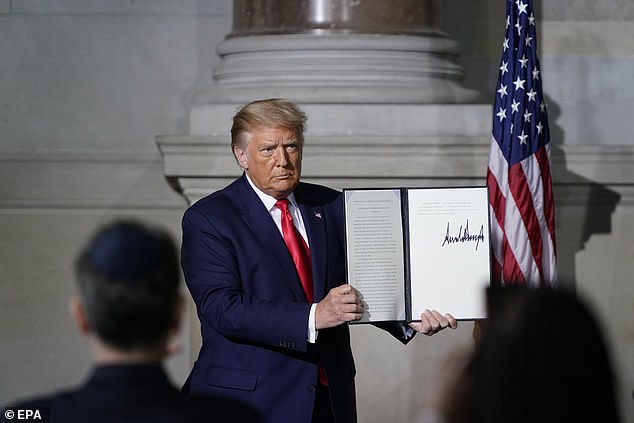 During a speech at the National Archives marking Constitution Day, Trump announced he will soon sign an order to promote patriotic education at public schools through an initiative dubbed the ‘1776 Commission’

Hannah-Jones won a Pulitzer Prize for her piece in the magazine, which was published on the 400th anniversary of slavery in the United States.

The journalist responded to Trump’s remarks on Thursday night, saying the country’s history of slavery cannot be erased despite the new curriculum.

‘These are hard days we’re in but I take great satisfaction from knowing that now even Trump’s supporters know the date 1619 and mark it as the beginning American slavery,’ she tweeted.

‘1619 is part of the national lexicon. That cannot be undone, no matter how hard they try.’

The tweet received hundreds of mixed responses, with some users criticizing Hannah-Jones’s portrayal of the U.S. as ‘evil’ and her claims that American history should be centered around the beginning of slavery. 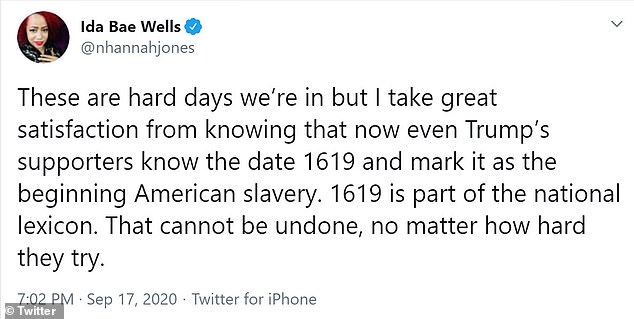 Hannah-Jones defended her work on Twitter which she said was developed to enhance the knowledge about slavery, not rewrite history

‘I don’t think any reasonable person dismisses the importance of 1619 or the history and legacy of racial slavery in America. The umbrage, I think, is the narrative that the United States is inherently evil, rather than an inherently good nation on a journey of democratization,’ Twitter user Andre Beliveau said in response.

‘Besides the point that nowhere does the project argue about evil, you’re a self-proclaimed history nerd but think arguments about the inherent goodness or evilness of a country embody valid historical critique?’, she fired back.

‘It’s also so strange to try to compel people whose ancestors were enslaved by this country, then endured 100 years of racial apartheid and only 50 years of full legal citizenship to vouch for the inherent goodness of such country. What,’ she added.

The 1619 Project evolved from Hannah-Jones’s essay last year and, with help from the Pulitzer Center, educational materials were developed to enhance the knowledge about slavery, not rewrite history, according to the Times.

Hannah-Jones defended her work again on Friday, tweeting that her project does not argue that 1619 is the country’s true founding, as critics claimed. 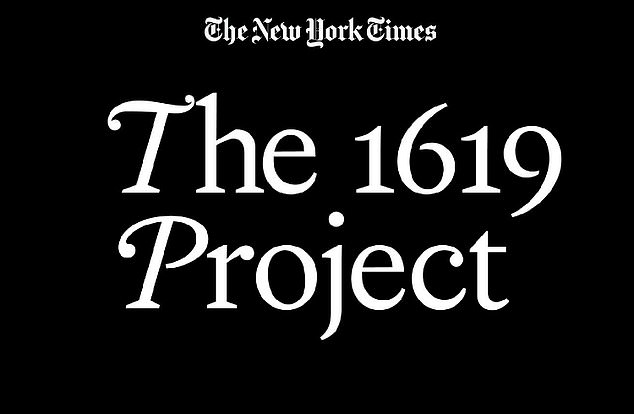 Trump ripped the New York Times’ 1619 Project, which evolved from Jones’s essay. The title ofrefers to the year a ship arrived on American soil carrying the first enslaved Africans

Hannah-Jones said that her project does not argue that 1619 is the country’s true founding, as critics claime

‘What the #1619Project *does* do is invite the reader/listener to contemplate what it would *mean* to consider 1619 and the beginning of American slavery as our founding, as it argues that 1619 is as foundational to the American story as 1776,’ she added.

‘American parents are not going to accept indoctrination in our schools, cancel culture at work, or the repression of traditional faith, culture and values in the public square,’ he said. ‘Not anymore.’

Trump made the comments at what was billed as a Conference on American History at the National Archives, which houses the nation’s most treasured documents.

He warned attendees that ‘as we gather this afternoon, a radical movement is attempting to demolish this treasured and precious inheritance.’

The president tore into ‘radicals’ for causing ‘mayhem’ on the nation’s streets, and sought repeatedly to tie them to his political adversaries.

Earlier, Hannah-Jones had also criticized Trump’s initiative as an attack on the First Amendment to the Constitution which she said abhors government attempts to censor speech and guarantees a free press.

‘The efforts by the president of the United States to use his powers to censor a work of American journalism by dictating what schools can and cannot teach and what American children should and should not learn should be deeply alarming to all Americans who value free speech,’ she said.