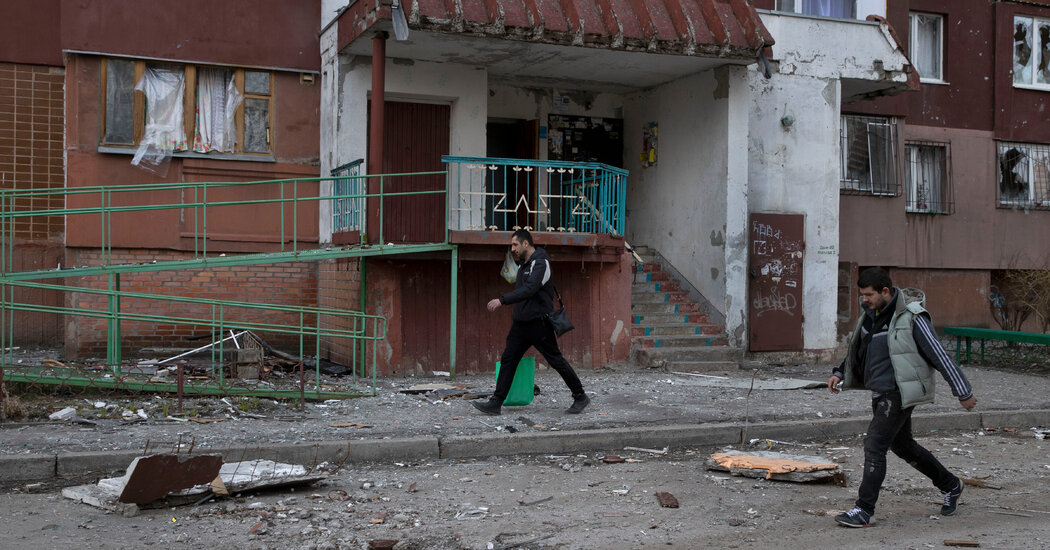 WASHINGTON — Russian forces in Ukraine appear to be using a new type of weapon as they step up attacks on civilian targets: an advanced land mine equipped with sensors that can detect when people walk nearby.

Ukrainian bomb technicians discovered the device, called the POM-3, last week near the eastern city of Kharkiv, according to Human Rights Watch, a leading human rights group, which has reviewed photos provided by Ukraine’s military.

Older types of land mines typically explode when victims accidentally step on them or disturb attached tripwires. But the POM-3’s seismic sensor picks up on approaching footsteps and can effectively distinguish between humans and animals.

Humanitarian deminers and groups that campaign against the use of land mines said the POM-3 would make future efforts to locate and destroy unexploded munitions in Ukraine vastly more complicated and deadlier.

“These create a threat that we don’t have a response for,” said James Cowan, who leads the HALO Trust, a British American charity that clears land mines and other explosive remnants of war to help countries recover after conflicts. The group began removing unexploded munitions from the Donbas region of eastern Ukraine in 2016, after Russian-backed separatists started fighting the Ukrainian government.

“We’ll need to find some donors to procure robotics that can allow us to deal with these threats at some distance,” Mr. Cowan added.

The POM-3 is typically launched by a rocket and falls back to earth by parachute before sticking into the ground — where it waits, according to CAT-UXO, an online resource for military and civilian bomb technicians. When the mine senses a person, it launches a small explosive warhead that detonates midair, producing fragments that are lethal up to about 50 feet away.

Mr. Cowan, a retired British Army major general, said his staff of 430 Ukrainians clearing unexploded munitions in Donbas had been unable to continue working since Russia launched a full invasion of the country in late February, with many staff members temporarily relocating in Ukraine. He anticipates that in the future, HALO’s operation across the country will require about 2,500 workers, given that many areas outside Donbas are now contaminated with unexploded munitions as well.

U.S. government officials have said Russia appears to be moving troops to consolidate its hold on Donetsk and Luhansk, which could mean that even more weapons like the POM-3 will be used in the war.

“The war is entering a static phase — trenches are being dug,” Mr. Cowan said. “This is the time when I would expect the Russians to start using land mines on a massive basis.”

HALO, which stands for Hazardous Area Life-Support Organization, has about 10,000 employees around the world and is among the few international nonprofits that have remained in Afghanistan since the Taliban took control of Kabul, the capital, in August. Mr. Cowan said the future cleanup in Ukraine would require roughly the same number of workers as HALO’s current operation in Afghanistan, which is recovering from decades of armed conflict.

The POM-3 is just one new hazard among many that his organization expects to encounter, in addition to an untold number of rockets, bombs and artillery shells that failed to detonate on impact. Russia has also attacked Ukrainian arms depots, causing fires and explosions that typically fling hundreds or even thousands of damaged munitions into surrounding areas.

Pushing for more sanctions. E.U. leaders are weighing a ban on buying Russian coal and a ban on Russian vessels in European ports. If approved, the measures would be the harshest the bloc has enforced so far. The United States is also expected to impose broad sanctions on two Russian banks.

On the ground. Russia has nearly completed its withdrawal from around Kyiv and is preparing for intensified assaults against eastern and southern Ukraine, according to military analysts. Russian forces continued to bombard the southern city of Mariupol,

The treaty does not prohibit the use of antitank land mines — which typically have a much larger explosive charge and are designed to detonate only when a vehicle drives over or near them — nor does it address improvised explosive devices built to destroy vehicles. Videos posted on social media purport to show both antitank mines and improvised bomb attacks on Russian vehicles in Ukraine.

Russia’s use of land mines was among the discussions at an event on Tuesday on Capitol Hill for the United Nations’ international mine awareness day, which brought together groups that focus on the issue and lawmakers from Congress’s Unexploded Ordnance/Demining Caucus.

“Wars end, they stay,” Senator Patrick J. Leahy, Democrat of Vermont, said of land mines and unexploded munitions. “The targets are invariably civilians, and they are in places where you have a limited ability to provide lifesaving medical care.”

“Look at what’s happening in Ukraine — Russia is placing land mines in people’s homes, as well as children’s playgrounds and places where people go,” Mr. Leahy said. “That’s using it as a weapon of terror.”