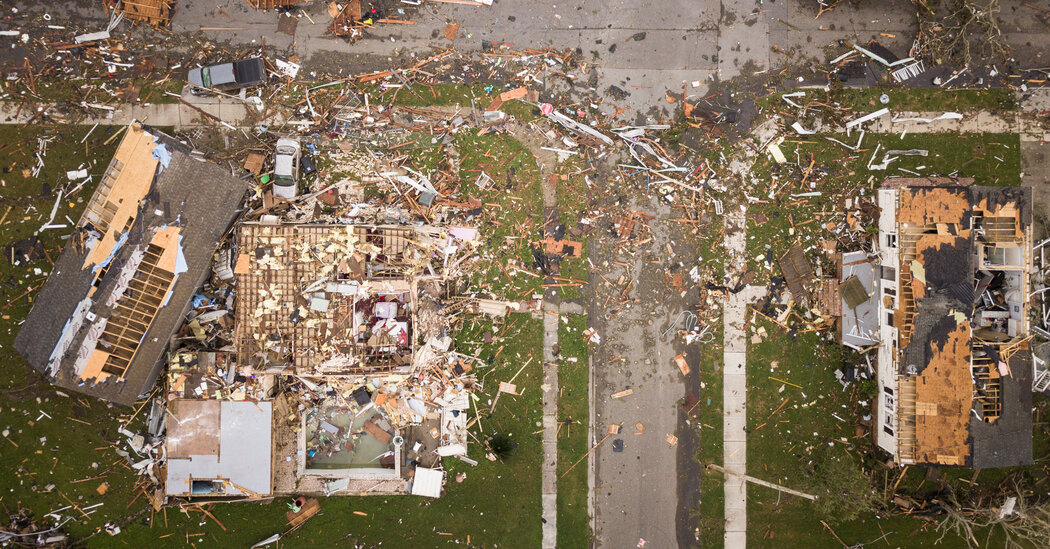 NEW ORLEANS — Search-and-rescue crews surveyed heavily damaged homes and debris-filled streets on Wednesday after tornadoes ripped through the New Orleans area the evening before, killing at least one resident and knocking out power to thousands of residents.

The National Weather Service confirmed that two tornadoes had hit the area: one in Lacombe, north of the city across Lake Pontchartrain, and another that tore through both the Lower Ninth Ward in New Orleans and St. Bernard Parish, sending several people to the hospital. The weather service rated the St. Bernard tornado as at least an EF-3, characterized by wind speeds of 136 to 165 mph, making it the most powerful tornado to hit the region since 2017.

Gov. John Bel Edwards of Louisiana declared a state of emergency in four parishes in the New Orleans area. “Unfortunately our people have become all too familiar with rebuilding after tragedy and loss, but it is never easy,” the governor said in a statement. “I have pledged to local leaders that we will be here to support their long-term recovery efforts.”

At a press briefing, he urged insurers to work swiftly with residents who are now forced to rebuild. “We’re calling on the insurance companies to do the right thing, just give the people the benefit of the premium dollars that they paid for and treat them with respect and conduct themselves in good faith,” he said.

A 25-year-old man was killed in the storm, and seven people were treated for minor injuries at a hospital on Tuesday night, said Guy McInnis, the president of St. Bernard Parish.

When the sun came up on Wednesday, Mr. McInnis said, he was grateful for the clear weather, which would make response efforts easier. “And the next thought was: How did no one else die in this event?” he said. “It’s just incredible what these tornadoes do.”

About 120 workers checked door-to-door for residents who might have been unable to call for help, said Butch Browning, the state fire marshal. He estimated that about 8,500 people lived in 2,600 residences in the search perimeter set up along the tornado’s apparent two-mile path.

Southeast Louisiana residents are more accustomed to coping with hurricanes, which generally come with several days’ warning, Mr. Browning noted. And because much of the region is at or below sea level, there are few basements for shelter. Still, he said, the low injury toll indicated that residents had managed to seek safety in interior rooms.

Authorities reported major damage to about 50 buildings. The destruction was concentrated in the community of Arabi.

There, the streets were littered with small pieces of wood and wire, tufts of grass from the nearby marshland and puffs of pink insulation.

Some residents, assessing the damage and checking on neighbors, described a terrifying ordeal.

After the tornado blew through on Tuesday night, Aaron and Nerissa Ledet heard an eerie quiet, then screams. A neighbor’s home had been blown into the middle of the street. Inside, a 22-year-old woman who was dependent on a ventilator and oxygen tank was trapped, unable to move or breathe.

Mr. Ledet and a few other neighbors ran into the house, despite a cracked center wall that caused the building to sway in the wind. Ultimately an eight-person search and rescue team was required to cut the woman loose from construction debris and furniture.

Many residents expressed gratitude that the human toll was not greater.

The house belonging to Jim and Judy Norwalt lost its roof and front porch. “I bet it didn’t take 15 seconds. It was fast, so fast,” said Ms. Norwalt, 66, who had pulled her 87-year-old mother out of a recliner and laid on top of her as a shower curtain blew into the room, propelled by a brick that had flown through the bathroom window.

Mr. Norwalt, 66, was nearby, on the floor of the hallway, as the tornado peeled the roof and ceiling off their bedroom, which now is open to the sky.

Still, by Wednesday morning, Ms. Norwalt said she felt almost optimistic. They had spent the night with their two cats in their partially ruined house. “We’re safe,” she said. “And I’m not going anywhere else. We’ll just get a new roof. Clearly, we got some living left to do.”

John Bauman, a local plumber, said his block of Success Street in Arabi had been left fairly intact. But a block away, around a short curve, the damage was severe.

Mr. Bauman, 45, pointed to a cottage with shredded roof rafters and walls that flared out at the bottom.

“Looks like they were home — both of their vehicles are here,” he said, wondering aloud about the fate of the residents. “How did they ever get through?”

Another house, where Mr. Bauman had once worked on the pipes, had no roof at all. Insulation hung off two walls like a pink feather boa.

Chris Dier of St. Bernard Parish recalled the sight of flying debris and the sound of a loud roar. “It was like nothing I’ve ever heard before,” said Mr. Dier, a high school history teacher.

The tornado skipped his house, but about two streets away, a church was destroyed, homes were flattened and vehicles were overturned and covered in debris.

Classes at Arabi Elementary School were canceled on Wednesday as crews repaired the roof and windows. Carla Carollo, the principal, said school buses had been tossed about, and some streets leading to the school were blocked by debris.

Ms. Carollo said the school would most likely reopen as soon as power was restored. She hoped it would be soon, she said, because it was the safest place for her students to be as their parents begin starting over after losing everything.

The tornado came as a robust spring storm system that was blamed for at least one other death this week moved through the Deep South.

A tornado last struck New Orleans in February 2017, with winds estimated by the National Weather Service of up to 150 miles per hour. That storm damaged more than 600 homes and injured 33 people.