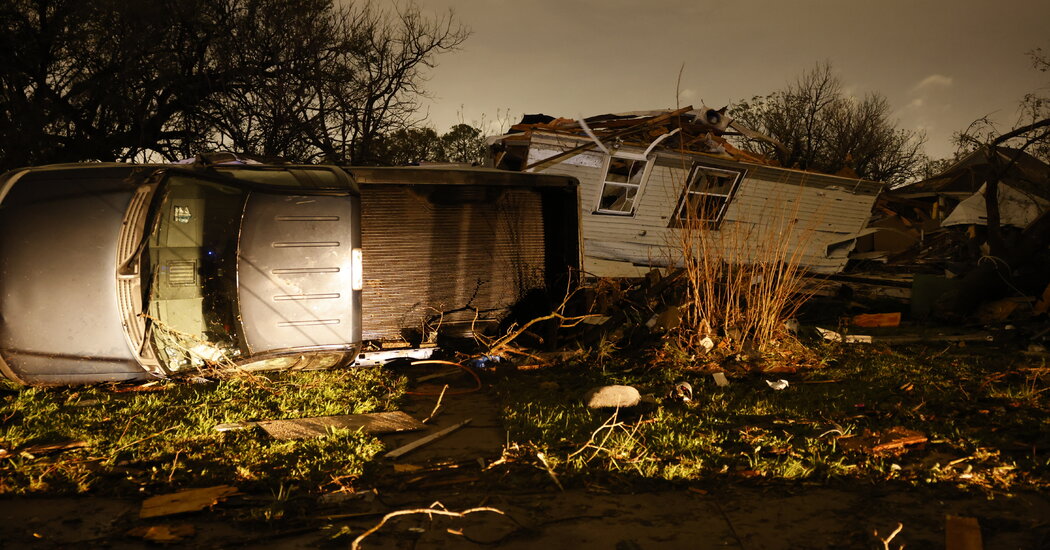 NEW ORLEANS — As morning dawned the day after two tornadoes touched down, people in the New Orleans area awoke on Wednesday to survey the heavily damaged homes and debris-filled streets left in its path.

The National Weather Service confirmed early Wednesday that two tornadoes had hit the area the night before: one in Lacombe, north of the city across Lake Pontchartrain, and another that hit both the Lower Ninth Ward in New Orleans and St. Bernard Parish, killing at least one person and sending more to a hospital. Rescuers from the National Guard, state police and others spent the overnight hours sifting through the destruction looking for residents who may have been trapped.

“We don’t know how many and we don’t know the severity of the injuries at this time,” Guy McInnis, the president of St. Bernard Parish, said in an interview as officials were struggling to determine the number of people displaced or hurt and the extent of the damage.

“There are houses that are missing,” said James Pohlmann, the sheriff of St. Bernard Parish. “One landed in the middle of the street.”

In Arabi, a hard-hit community in St. Bernard Parish, the streets were littered by small pieces of wood and wire, tufts of grass from the nearby marshland and puffs of pink insulation.

John Bauman, a local plumber, surveyed the scene on Wednesday morning and somberly shook his head.

“This is the first time I’ve seen this,” he said. His block of Success Street had been left fairly intact. In his neighbor’s backyard, the top to a shed had blown off. But a block away, around a short curve, the damage was severe.

Mr. Bauman, 45, pointed to a cottage with shredded roof rafters and walls that flared out at the bottom.

“Looks like they were home — both of their vehicles are here,” he said, wondering aloud about the fate of the residents. “How did they get through? How did they ever get through?”

Another house, where Mr. Bauman had once worked on the pipes, had no roof at all. Insulation hung off two walls like a pink feather boa.

Two doors down, a house had blown into the middle of the street, carrying a young girl who was dependent on a ventilator, officials said.

Aaron Ledet, 44, said on Tuesday night that when he heard the wind, he headed to the bathroom. “I just put my family in the bathtub and prayed,” he said. Once the gusts ceased, he went outside and was among the neighbors and firefighters who rescued the girl from her house.

Similar scenes played out across St. Bernard Parish on Tuesday night. Neighbors who had helped each other through Hurricane Katrina in 2005, which flooded every house in the parish, pitched in again to help each other, amid pitch dark, fallen tree branches, live power lines and the smell of gas from damaged gas lines. “We have a long road ahead of us with this recovery,” Mr. McInnis of St. Bernard Parish said at a news conference late Tuesday night.

Callie Marshall, 22, had just applied a mud mask to her face when she heard “lots of wind coming fast.” Her house in St. Bernard Parish started shaking. The tiles from her shower started flying off the wall. Holding her 2-year-old son, Luke, she crouched next to the toilet as the funnel cloud passed over, bringing down a large oak tree next to her house and completely flattening another house down the block.

The tornado came as a robust spring storm system that was blamed for at least one other death this week moved through the Deep South. By Tuesday morning, hours before the tornado hit, Gov. John Bel Edwards of Louisiana had closed many state offices, and schools in Louisiana and Mississippi adjusted their schedules in anticipation of the weather.

The same storm system was moving East on Wednesday, and the Weather Service said the threat of severe weather and flooding “should wane somewhat.” Nearly 100,000 people were without power at some point across Texas, Mississippi and Louisiana on Tuesday, according to PowerOutage.us, a website that aggregates data from utilities across the United States. By early Wednesday, much had been restored.

Parts of the Florida Panhandle and Southeastern Alabama remained under a tornado watch early Wednesday morning.

A tornado last struck New Orleans in February 2017, with winds estimated by the National Weather Service of up to 150 miles per hour. The storm damaged more than 600 homes and injured 33 people.