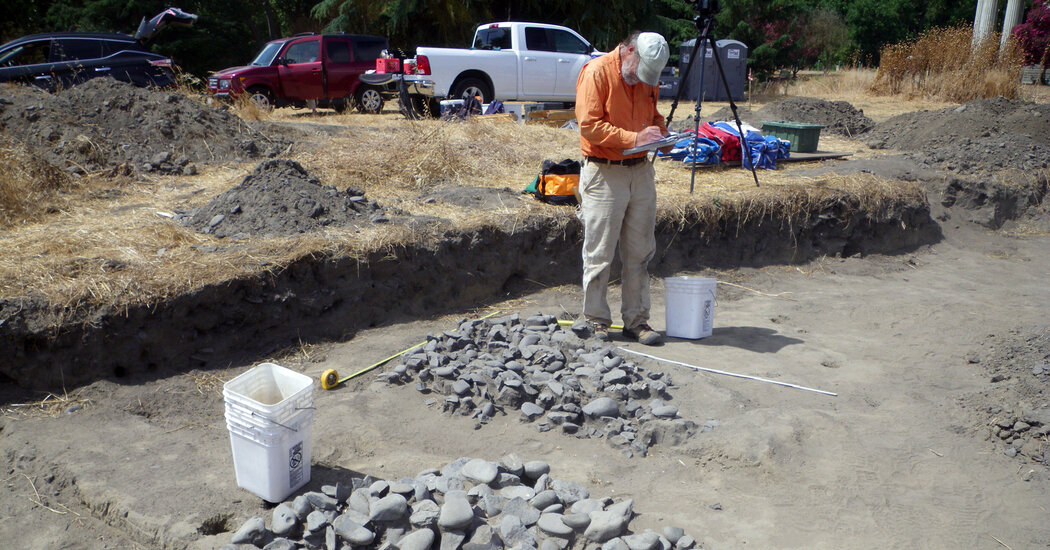 In “The Handbook of the Indians of California,” published in 1925, the anthropologist Alfred Kroeber pronounced the Ohlone people “extinct so far as all practical purposes are concerned,” noting that only “a few scattered individuals survive.”

Although the anthropologist would not recant his declaration of extinction until the 1950s, “the damage was done,” said Charlene Nijmeh, the chairwoman of the Muwekma Ohlone Tribe, which is far from extinct.

The Muwekma Ohlone Tribe is one descendant community of the Ohlone people, who originally lived on 4.3 million acres in the Bay Area. For decades, the Muwekma have sought to regain federally recognized status, which they lost in the 1920s. Linguistic scholars and archaeologists had suggested the Ohlone people migrated there 1,500 to 1,000 years ago. But the tribe has long asserted that its presence in the region goes back further.

A study published in March in the journal Proceedings of the National Academy of Sciences offers fresh genomic evidence that the Muwekma’s connection to the Bay Area goes back at least 2,000 years. Working alongside the Muwekma Ohlone Tribe, researchers from several universities extracted DNA from 12 ancient people buried in the region as far back as 2,000 years ago and found biological continuity with DNA collected from modern-day members of the tribe.

“Validation, finally,” said Monica Arellano, the vice chairwoman of the tribe and an author of the paper. “This adds to all the information we’ve put out there, years of compiling and doing research proving who we are.”

Alyssa Bader, an anthropologist at the University of Colorado Boulder who was not involved with the research, praised how the paper included representatives of the tribe as co-authors and foregrounded community engagement. “It’s recognized as a really essential part of the scientific research method and not something that’s buried in supplemental information,” Dr. Bader said, adding, “Those are all sort of exciting directions for genomic research that includes genomic research on Indigenous communities and ancestors.”

In 2014, the San Francisco Public Utilities Commission proposed a construction project at an archaeological site that was likely to have human burials. The commission reached out to the Muwekma Ohlone Tribe, the most probable descendants of the ancient people.

The tribe brought on the Far Western Anthropological Research Group, a cultural resources consulting firm, to conduct excavations at the site, which they named Síi Túupentak (Place of the Water Round House Site). Síi Túupentak, which sits near the confluence of the Alameda Creek and the Arroyo de la Laguna, was a lush site. The village community fished in the creeks and managed nearby forests and grasslands with controlled burning, said Brian Byrd, an archaeologist with Far Western.

Far Western also excavated another ancient site nearby, named Rummey Ta Kuččuwiš Tiprectak (Place of the Stream of the Lagoon Site), which was inhabited as early as 2,500 years ago.

Tribal members led the excavations of the burials, which was an emotionally challenging task. “It’s unfortunate that we had to move them,” Ms. Arellano said. “But if anybody has to do it, we take that responsibility very seriously and with as much care and love as possible.” The burials were most likely prepared for people of high lineage, as many were interred with precious shells, such as abalone pendants, Ms. Arellano said.

Occasionally when burials were discovered, the excavators gathered under a big tree and talked through the process to ensure everyone was heard, according to Dr. Byrd. “Trust has often been something that isn’t the first step these days for archaeology and native communities,” he said.

The Muwekma Ohlone tribal council wanted to know if the burials at the sites could help prove their people’s ancient presence in the Bay Area, said Alan Leventhal, the tribe’s archaeologist and an emeritus lecturer at San Jose State University.

Ripan Malhi, an anthropologist at the University of Illinois at Urbana-Champaign, and Noah Rosenberg, a population geneticist at Stanford University, joined the project to lead the ancient DNA analysis. The researchers presented all additional tests to the tribal council for approval. The council gave the researchers the go-ahead to study dental plaque for signs of inhalants such as tobacco, as well as to conduct tests to determine the sexes of the buried children, Dr. Byrd said. “We were able to identify a few samples from ancestors that had really good preservation,” Dr. Malhi said.

After extracting DNA at the two sites from 12 individuals who lived between several hundred and 1,900 years ago, the researchers compared their genomes with publicly available genetic information about other Indigenous communities in the Americas and ancient individuals worldwide. The oldest and most recent burials shared distinctive combinations of genetic variants, suggesting they were from related groups.

The analysis identified a shared component of ancestry linking people at the two ancient sites to modern-day members of the Muwekma. This ancestry can be found in other modern communities, but it is present in a much higher proportion in the Muwekma.

“It was surprising to find this level of continuity given the many disruptions the Ohlone people experienced during Spanish occupation, such as forced relocations and admixture with other tribes forcibly displaced by the Spanish,” Dr. Rosenberg said.

In keeping with the principles of Indigenous data sovereignty, the Muwekma will review requests for genomic data collected from the sites and tribal members, retaining power over how the data is used. “It’s minimizing potential harms to communities,” Dr. Bader said. “That is important.”

For members of the Muwekma Ohlone Tribe, these genetic results represent a new line of evidence that aligns with their tribe’s oral history. “That’s pretty much our story, having to prove who we are,” Ms. Arellano said. “We knew who we are, we know who we are, and we’re still here.”

The Muwekma can trace their ancestry through several missions in the Bay Area and resided on small settlements called rancherias until the early 1900s, Mr. Leventhal said.

The tribe had once been federally recognized under a different name, the Verona Band of Alameda County. But it lost recognition after 1927, when a superintendent from Sacramento determined that the Muwekma and more than 100 other tribal bands did not need land, effectively terminating the tribe’s formal federal recognition, Mr. Leventhal said. “The tribe was never terminated by any act of Congress,” he added.

The Muwekma hope the new study and any further research will strengthen their case for federal recognition. “The cost of living is pushing us out,” Ms. Nijmeh, the tribe’s chairwoman, said. “Recognition means that we will be able to have a land base and have a community village and have our people stay on our lands in their rightful place.”

Síi Túupentak will soon open an interpretive center featuring some of the artifacts from the excavation, informational signage about the history of the tribal language and a replica of an eagle, an allusion to the Muwekma creation story.

But the ancient people once buried at Síi Túupentak will be reinterred elsewhere, as close as possible to their original graves, Ms. Arellano said.