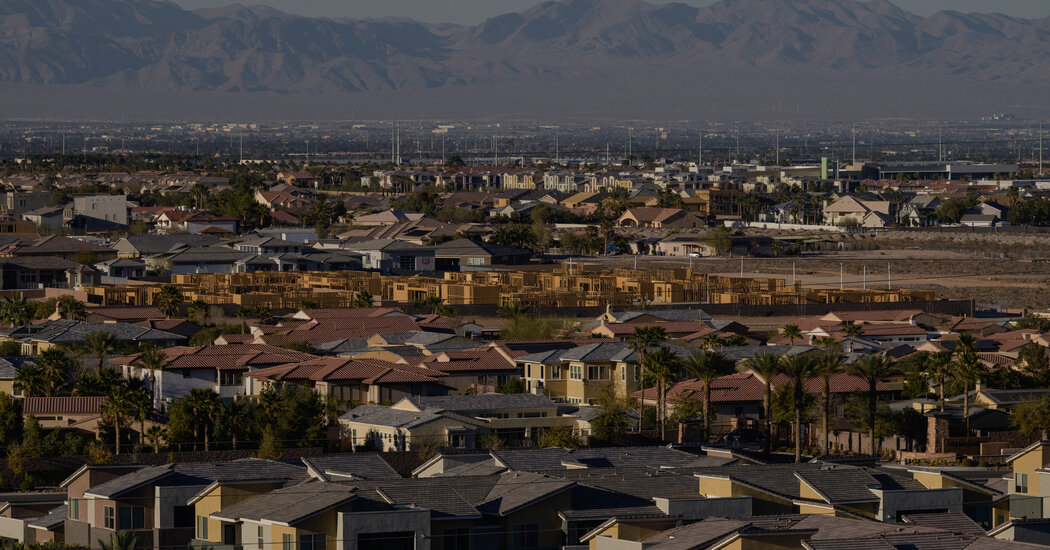 LAS VEGAS — Scars from the coronavirus pandemic are still visible here. Housing prices skyrocketed, with rents rising faster than almost anywhere else in the country. Roughly 10,000 casino workers remain out of work. Gas prices, now more than $5 a gallon, are higher than in every other state except California.

Amid a flagging economy, the state Democrats held up as a national model for more than a decade — registering and turning out first-time voters — has become the epitome of the party’s difficulties going into the 2022 midterm elections.

Democrats have long relied on working-class and Latino voters to win Nevada, but the loyalty of both groups is now in question. Young voters who fueled Senator Bernie Sanders’ biggest victory in the 2020 Democratic presidential primary remain skeptical about President Biden. And Senator Catherine Cortez Masto, a Nevada Democrat and the country’s first Latina senator, is one of the party’s most endangered incumbents.

She must overcome the president’s sagging approval ratings, dissatisfaction with the economy and her own relative anonymity. And she lacks the popularity and deep ties with Latino voters that Senator Harry M. Reid, who died in December, harnessed to help build the state’s powerful Democratic machine. The state has long been a symbol of the Democratic Party’s future by relying on a racially diverse coalition to win elections, but those past gains are now at risk.

“There’s a lot of frustration on the ground that no one is listening,” said Leo Murrieta, the director of Make the Road Nevada, a liberal advocacy group. “They are not wrong. It’s hard to talk about the possibility of tomorrow when your todays are still torn apart.”

Nevada, which Mr. Biden carried in 2020, has been a linchpin for Democrats in presidential elections since 2008. But an election-cycle pattern that has alarmed Democrats has emerged. The party dominates in presidential elections but struggles during the midterms when a Democrat is in the White House. Democratic turnout takes a steep drop, largely because of the state’s highly transient population, and Republicans gain ground.

In 2014, the last midterm election with a Democrat in the White House, the state’s turnout dropped 46 percent compared to the previous presidential election, ushering in Republican control of the state legislature. This year, Republican victories could unseat the Democratic governor, Steve Sisolak, and the state’s three Democratic members of Congress while also replacing Ms. Cortez Masto with a 2020 election denier in the Senate.

Beyond turnout, a deeper problem for Democrats is that the state has been turning, ever so slightly, less blue. The state’s share of registered Democrats has fallen — from 39.4 percent in 2016 to 33.6 percent in February, according to figures from the Nevada secretary of state. At the same time, more than 28 percent of registered voters are now unaffiliated with any party, an increase from 20 percent in 2016. Officials said the spike in unaffiliated voters stems from an automatic voter registration system Nevada voters adopted in 2018.

The state’s economy has shown some signs of improvement. Joblessness in Reno is down to some of the lowest numbers in a century. Democrats are counting on the region, which has attracted new residents, many from California, and become something of a tech hub. But with more than 70 percent of the state’s population living in Clark County, which is home to Las Vegas, the election is likely to be decided on the outcome there. In interviews with Las Vegas voters, the economy overshadowed all other issues. There was a sense of optimism among some, but they worried that they would not have enough money for the basics — rent, food, gas.

“What I care about is opportunity and the economy,” said Angel Clavijo, 23, who voted for the first time in 2020. Though he cast his ballot for Mr. Biden, Mr. Clavijo said he was not registered with either party.

Though he was able to keep his job as a housekeeper at The Venetian Resort through the pandemic, Mr. Clavijo watched anxiously as his parents’ bills stacked up. “I really can’t say I’m paying a lot of attention to politics right now,” he said. “I’m not just going to vote by party.”

Margarita Mejia, 68, a retired hotel worker, said she has voted for most of her life for Democrats but sat out the 2020 election as she helped her family and friends deal with the pandemic.

“It was depressing, being alone, struggling for everything,” said Ms. Mejia, who was selling clothing, stuffed animals and art from her front yard last week. “I don’t know what the government does for us, even when they say they want to help.”

Mr. Clavijo and Ms. Mejia could not name Nevada’s incumbent senator up for re-election — Ms. Cortez Masto, whose seat is critical if the Democrats want to maintain control of the Senate.

Despite five years in the Senate and eight years as Nevada’s attorney general, Ms. Cortez Masto remains unknown by a broad swath of the Nevada electorate, as a result of her longtime aversion to publicity, cautious political demeanor and Nevada’s transient voters.

Almost half the voters on Nevada’s rolls have registered since Ms. Cortez Masto was last on the ballot in 2016, according to an analysis by TargetSmart, a Democratic data firm. Her own internal polling found that nearly a quarter of Latinos didn’t have an opinion on the race between her and Adam Laxalt, a former Nevada attorney general who is likely to be her Republican opponent in the general election.

The Cortez Masto campaign began reintroducing her to Latino audiences earlier this month with a Spanish-language television advertisement that leaned heavily on telling her life story as a political pioneer and her family’s history in the military.

It gave a generous interpretation of her biography: Her father, Manny Cortez, was one of the most powerful figures in Las Vegas during stints on the Clark County Commission and later as the head of the Las Vegas Convention and Visitors Authority. In that role, he approved the ubiquitous Las Vegas marketing phrase, “What happens here, stays here.”

Mr. Cortez, who maintained a close friendship with Mr. Reid, operated as a behind-the-scenes player. While that served him as a political operator, it may not help his daughter in this year’s high-profile race that will help determine control of the Senate.

“He was never a guy who went out and sought attention from the media,” said Jon Ralston, the longtime Nevada journalist. “She is kind of an exaggerated version of him in many ways.”

That aversion to seeking the spotlight has left Ms. Cortez Masto as essentially a generic Democrat in a midterm year when being yoked to Mr. Biden is a political hazard. A January poll from The Nevada Independent showed Mr. Biden’s approval rating in the state at just 41 percent.

“No state was hit harder than Nevada, and we’re recovering quickly because Catherine fought to get the relief our hospitality industry needed, supporting the tens of thousands of workers who rely on our tourism economy,” a spokesman, Josh Marcus-Blank, said in a statement.

Jeremy Hughes, a Republican who was a campaign adviser to Dean Heller, the former Republican senator, said Ms. Cortez Masto would have difficultly separating herself from Mr. Biden and the national party’s diminished brand.

“Every data point I’ve seen points to Hispanic voters being more open to supporting a Republican this cycle than any in recent memory,” Mr. Hughes said. “If the economy is the No. 1 issue on voters’ minds across the country, in Nevada and especially among Hispanic voters, it’s the No. 1, 2 and 3 issue.”

But Democrats say that her likely Republican opponent, Mr. Laxalt, is unlikely to win over moderate voters. Mr. Laxalt, whose father and grandfather both served in the Senate, ran the Trump campaign’s effort to overturn Nevada’s 2020 election results.

Democrats are also counting on more economic improvement in Las Vegas, where the economy took a hit with the abrupt shutdown of the Strip but has started to be revived with crowded casinos.

On a recent sunny afternoon in east Las Vegas, Paul Madrid and Daniel Trujillo took a break in front of the barbershop they’ve run for the last 20 years. Business has been brisk lately, and the pair described themselves as relieved that the worst was behind them. Still, they have winced while watching the price of gas tick up at the station across the street.

Mr. Madrid, 52, called himself a “lifelong working-class Democrat” and said he had tried to pay less attention to politics since former President Donald J. Trump left office. As frustrated as he’s been, he is likely to vote for Democrats in November. But he said he felt less loyal than he once did.

“Something’s got to change,” he said. “We’ve got to put the country before party. I’ve got to stay positive. My business is back, customers are back and I just want this all to be over with.”