Nevada Gov. Steve Sisolak Is Accosted by Man Who Threatens to Hang Him 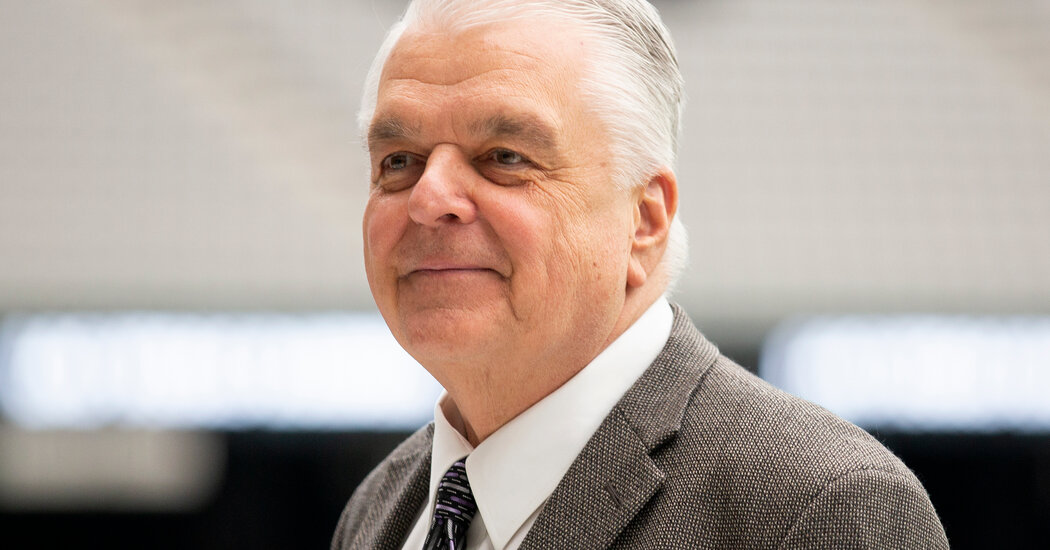 Gov. Steve Sisolak of Nevada was accosted at a Mexican restaurant in Las Vegas on Sunday by a man who recorded the confrontation in a video in which he threatens to “string you up by a lamppost.”

In the video, the man asks Mr. Sisolak, a Democrat, for a photo together. The governor agrees, and the man puts his arm around him before going into a profanity-laced rant and calling the governor a “new world order traitor.”

The governor and his wife begin to leave the restaurant, and the man follows him out.

“Where’s your security at, punk?” the man says in the video. “We should string you up by a lamppost right now.”

The man follows the governor and his wife into the parking lot of the restaurant, accusing Mr. Sisolak of treason and working for China. The governor’s wife, Kathy Sisolak, who was born in Nevada, is of Chinese descent, according to the governor’s website.

The governor and his wife are then joined near their vehicle by their daughter, who had been dining with them, at which point the man in the video leaves them alone.

The encounter comes at a time when threats against public officials — both Republicans and Democrats — have surged, according to a recent New York Times review of more than 75 indictments of people charged with threatening lawmakers since 2016.

A statement from the governor’s office on Monday said that Mr. Sisolak was “deeply disappointed in how this incident unfolded, particularly with the language used to talk about First Lady Kathy Sisolak’s heritage.”

The statement continued: “We can disagree about the issues, but the personal attacks and threats are unwarranted, unwelcome and unbecoming behavior for Nevadans. The governor works on behalf of all Nevadans — even those who disagree with him — and he will continue to do so.”

The governor’s office said the confrontation was being investigated, but it did not immediately respond to a request for comment on whether Mr. Sisolak would press charges.

The man, Justin Andersch, held a news conference on Tuesday in Las Vegas, during which he said he would not apologize to the governor.

Mr. Andersch said he had lost his job and his medical benefits because of Mr. Sisolak’s “desire to follow obediently in line with the other overreaching authoritarian measures” that he said had been implemented by public officials in the interest of public health.

“We’ve endured for two full years of authoritarian overreach that is guided by the constant shifting of the scientific goal posts,” Mr. Andersch said. “Our nation has reached a point where many of us feel faceless and nameless against the ruling elite that appear to live by a different set of rules and the rest of us.”

Mr. Sisolak recently lifted Nevada’s statewide mask mandate. However, like several other elected officials across the country, he faced backlash from some constituents throughout the pandemic over public health measures such as mask mandates and shutdowns. He is running for re-election this November.

Mr. Andersch founded a podcast called “Cannabis and Combat,” which is described on its website as a show that is “shining a light on the darkest corners of modern culture.”

“Get comfortable being uncomfortable because that’s what it’s going to take to bring the truth to the masses,” the show’s website says. “Thanks to our amazing supporters, we’re able to fight this battle every day. Evil never takes a day and neither do we.”