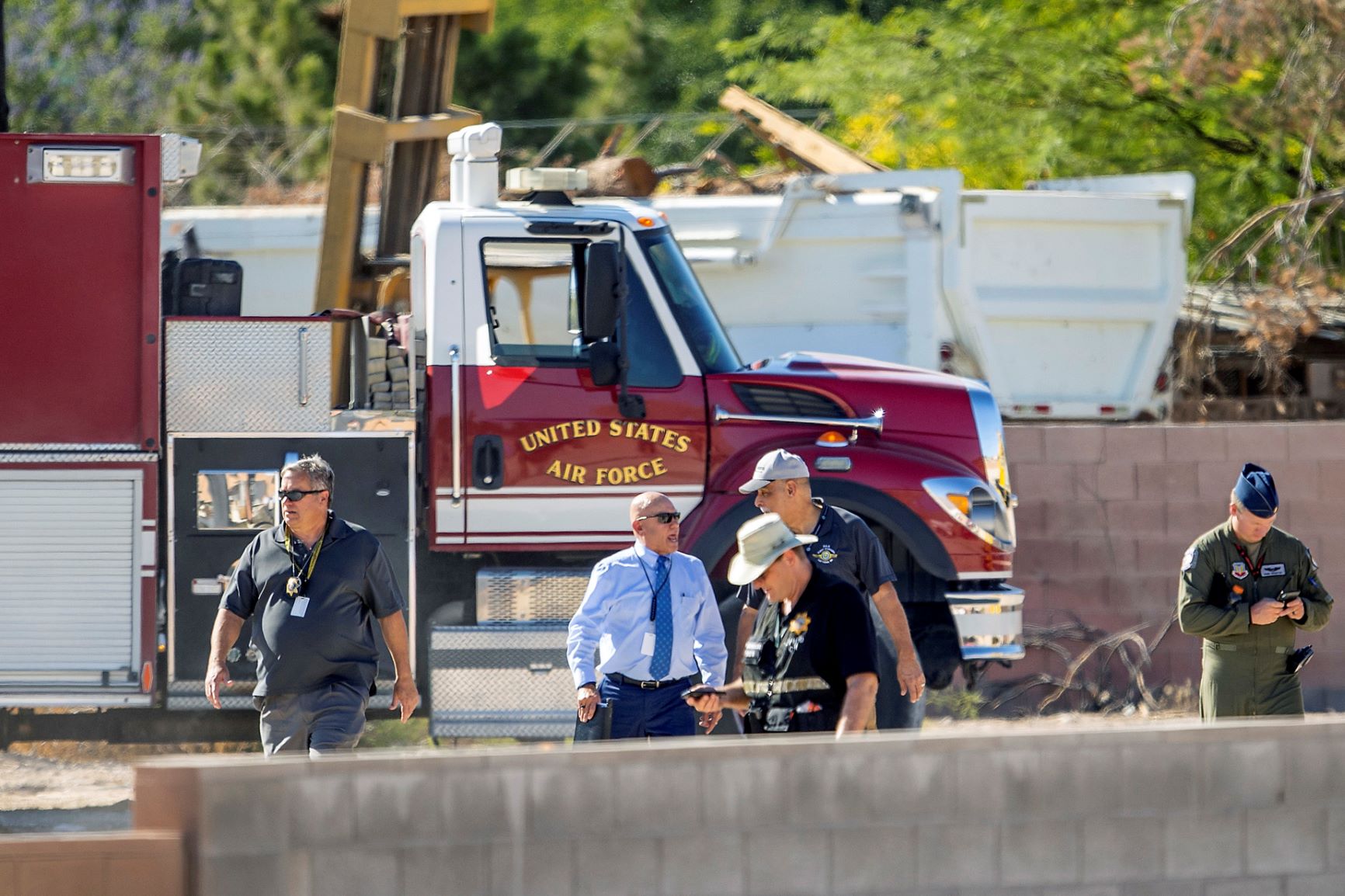 The pilot of a fighter jet owned and operated by a military contractor died when the aircraft crashed in a northeast Las Vegas neighborhood Monday afternoon, Nellis Air Force Base officials said.

The Draken US aircraft, identified as a Dassault Aviation Mirage F-1 fighter jet, went down for unknown reasons in a residential area just south of the base shortly before 2:30 p.m. The unidentified pilot was the only person on board, according to a Nellis news release.

Draken US, a Florida-based company, has been contracted since 2015 to provide “adversary air support” for the U.S. Air Force out of Nellis, according to the release and the company’s website.

Clark County Fire Department crews were called at 2:19 p.m. to 2245 N. Christy Lane, a home near East Lake Mead and North Nellis boulevards, for the crash, dispatch logs show. County property records show the home is owned by Jose Villanueva, who purchased the property in 2012.

Villanueva said no one in his home was injured. He described the plane crashing into his yard and the yard of his uncle’s house next door.

Thick, dark smoke could be seen billowing from the scene immediately after the crash. Las Vegas police and multiple federal agencies responded. The National Transportation Safety Board is investigating.

Draken US in a statement Monday evening acknowledged the death of their pilot, calling it a “tragic accident.”

“Our thoughts and prayers go out to the people and families affected by this event,” the statement read. “We are doing everything in our power to assist them in this time of need, and we are working closely with federal, state and local authorities.”

In the Nellis news release, base officials wrote: “The men and women of Team Nellis send our deepest condolences to the teammates, friends and family of our Draken wingman.”

“Kathy and I are praying for all those involved in today’s incident — especially the men and women of @NellisAFB and the first responders on the scene,” the post read, referring to Nevada’s first lady Kathy Sisolak.

In a statement Monday evening, Clark County Commission Chairman Marilyn Kirkpatrick — whose district includes Nellis and the neighborhood where the jet went down — said she was “incredibly saddened” by the crash.

“Our hearts go out to the family and friends of the pilot and the larger Nellis AFB family,” the statement continued. “Today’s tragedy is a reminder of the important work being done every day at Nellis in defense of our nation.”

About a half-mile from the crash site, end-of-the-day dismissal for students at Martin Luther King Jr. Elementary School was delayed by about 15 to 20 minutes, a Clark County School District spokesman said. Students are typically dismissed at 3:11 p.m., according to the school’s website. No further information was available.

Before the crash, Anthony Milano, 16, happened to be taking photos near Nellis of fighter jets overhead when he heard emergency calls on his air traffic scanner.

“We thought it was a house fire,” he said of the smoke down the street.

Suddenly, Milano said, fire trucks came rushing out from the base, responding to what he realized was one of the fighter jets he had been photographing.

About a mile from the crash site, Joe Flores had been working on his motorcycle in his garage when he heard a typical noise that comes with living in the northeast valley: house-rumbling, low-flying aircraft circling the area.

Then he heard a loud explosion, but didn’t think much of it until a cousin called about the nearby crash, asking if he was OK.

“There’s three or four of them flying that low every day,” he said of planes in the area. “I always hope they won’t hit a house or the little kids that walk around here.”

In 2016, a Vietnam War-era attack jet operated by Draken crashed about a mile from Nellis Air Force Base. The pilot at the time ejected and survived with non-life-threatening injuries.

The aircraft was a Douglas A-4K Skyhawk, returning along with another A-4 from a weapons school mission over the Nevada Test and Training Range north of Las Vegas.

“All these pilots are highly trained,” Draken’s director of business development for U.S. Air Force Programs at the time told the Review-Journal in 2016. “We’re all former Air Force, Marine and Navy fighter pilots that have extensive experience.”

On June 28, 2011, Capt. Eric Ziegler was killed when his F-16C flying out of Nellis crashed on public land near the test and training range.

Air Force investigators later concluded in a report that the 30-year-old pilot blacked out because of high gravitational forces before his fighter jet went down in rugged terrain 20 miles west of Caliente in Lincoln County.