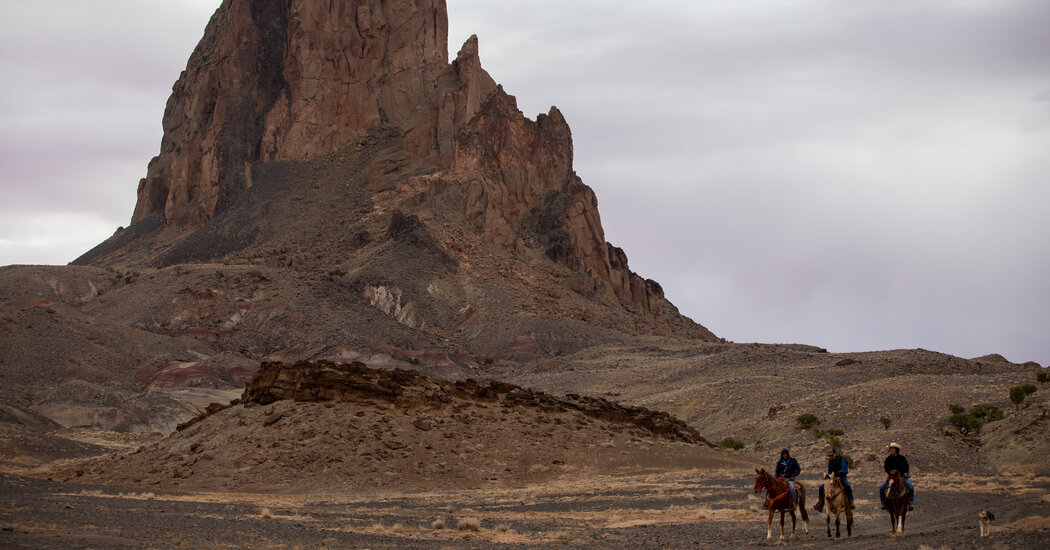 ALBUQUERQUE — The Navajo Nation already had its own police academy, universities, bar association and court system, plus a new Washington office near the embassies of other sovereign nations. And during the coronavirus pandemic the Diné, as many prefer to call themselves, gained an important distinction: the most populous tribal nation in the United States.

A rush to secure federal hardship benefits increased the Navajo Nation’s official enrollment to 399,494 from 306,268 last year, according to the Navajo Office of Vital Records and Identification. That jump was enough for the Diné to eclipse the Cherokee Nation, which has an enrollment of about 392,000.

The tribe’s growth, which came while it was enduring some of the nation’s most harrowing virus outbreaks, could affect the disbursement of future federal aid as well as political representation in the Southwest. The Navajo Nation reservation, which is larger than West Virginia, spreads over about 27,000 square miles of Arizona, New Mexico and Utah.

“This is the brighter side to a really bad time in the pandemic when we watched so many people go,” said Traci Morris, executive director of Arizona State University’s American Indian Policy Institute.

Dr. Morris, a member of the Chickasaw Nation in Oklahoma, said that while several tribes saw their enrollment increase during the pandemic, the 30 percent spike in the Navajo Nation was particularly notable. The Cherokee Nation, which normally sees about 1,200 applications for enrollment each month, has seen an increase to about 1,400 a month since the middle of last year, said a spokeswoman for the tribe.

Official tribal enrollment can often be lower than a tribe’s actual population because of factors including migration from reservations to urban areas and the different policies that the 574 federally recognized tribes in the United States have for determining membership. Some tribes, like the Diné, have relatively more stringent requirements than others that have loosened such rules.

Over the past year, thousands of Diné scrambled to update their enrollment information or to enroll officially for the first time to receive payments the tribe was directly distributing from its share of the Coronavirus Aid, Relief and Economic Security Act. Those payments of up to about $1,350 per adult helped many Diné weather a protracted period of economic instability while Navajo leaders put into place some of the country’s most aggressive virus mitigation tactics, including curfews and checkpoints.

The Navajo Nation has also outpaced much of the rest of the country in vaccinating its population; nearly 90 percent of those on the reservation who are eligible have received at least one shot.

At the same time, at least 1,297 citizens of the Navajo Nation have died from the virus. Residents have been particularly vulnerable because of a high prevalence of diseases like diabetes, the scarcity of running water for washing hands, and homes with several generations living under the same roof.

Although Navajo enrollment numbers climbed during the health crisis, some experts think the official statistics undercount the actual Diné population. The Census Bureau has not announced how large it considers the Navajo Nation based on data collected during the 2020 census.

Wendy Greyeyes, an assistant professor of Native American studies at the University of New Mexico, noted that most Diné live off the reservation, away from the offices that keep up with enrollment figures, and that the Navajo Nation maintains stricter citizenship requirements than many other tribes.

The Navajo Nation requires members to be at least one-quarter Diné, in contrast to tribes like the Cherokee that forgo a specific blood quantum requirement in favor of largely basing citizenship on having Cherokee ancestry.

“Living in Albuquerque, I’ve met so many members who don’t qualify for the minimum enrollment, or they may be enrolled in another tribe and cannot double enroll,” said Dr. Greyeyes, who is from Kayenta, Ariz., on the Navajo Nation reservation.

Dr. Greyeyes, who assisted people wanting to enroll in the tribe in recent months, also emphasized that the process can be bureaucratically complicated, potentially keeping some Diné from becoming citizens.

As the tribe has been growing, so has its political power. Diné politicians have recently made inroads in local races in places like southern Utah, and voter turnout in the Navajo Nation, which leans Democratic, is credited with helping President Biden win Arizona in 2020.

The Navajo Nation’s population growth is also a sign that efforts to strengthen self-determination among tribal nations are gaining momentum, building on a shift that got underway more than five decades ago under the Nixon administration. Previously, in the 1950s and 1960s, the federal government had adopted a policy of dismantling tribal sovereignty and encouraged thousands of Native Americans to leave reservations for American cities.

Eric Henson, a citizen of the Chickasaw Nation and a research fellow with the Harvard Project on American Indian Economic Development, said the Navajo Nation’s growing enrollment stood in sharp contrast to federal policies during the 20th century that were “literally an attempt to get rid of all the tribes.”

Mr. Henson said of the surging Diné numbers, “This is a really obvious way of saying, ‘Hey, we’re still here.’”