Naturalization Ceremony at R.N.C. Stands at Odds With Trump’s Stance on Immigration 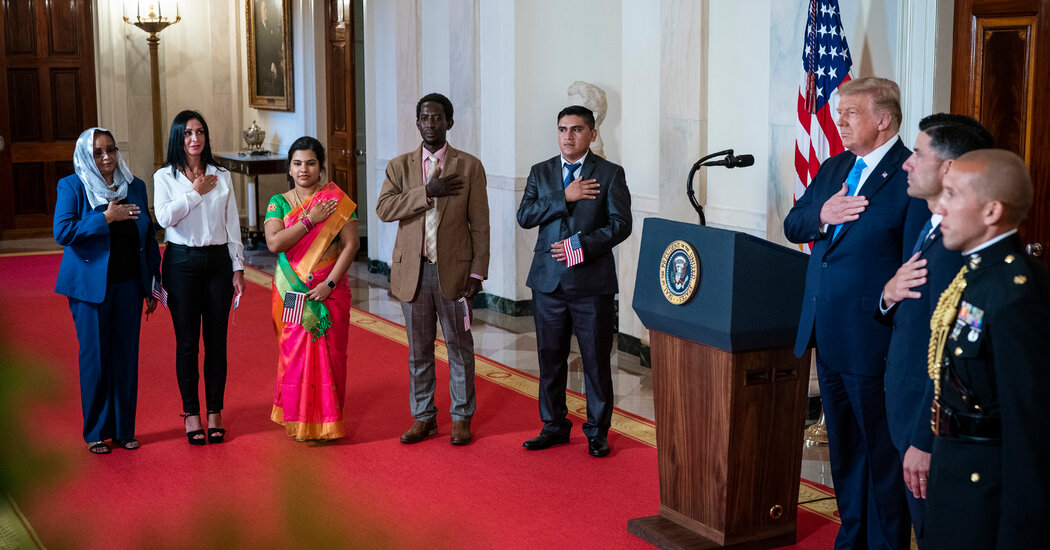 WASHINGTON — President Trump sought Tuesday to wrap himself in pro-immigrant sentiment — even though his administration has waged a yearslong assault on the nation’s immigration system — by presiding over a naturalization ceremony at the White House during the second night of the Republican National Convention.

Using the majesty of the White House for blatantly political purposes, Mr. Trump appeared during the convention’s second hour as “Hail to the Chief” played and strode to a lectern where five immigrants were waiting to take the oath to become citizens.

“Today, America rejoices as we welcome five absolutely incredible new members into our great American family,” he told them in a 10-minute ceremony that had been taped in the afternoon.

It was not the first time Mr. Trump has presided over such a ceremony. But the willingness to use the trappings of presidential power during a campaign convention was a stunning departure from the past, in which prior presidents have avoided seeming to blur the lines between official actions and political activity.

And Mr. Trump’s explicit claim that he loves and appreciates immigrants stands in stark contrast to his record over the past four years, during which he has repeatedly pursued anti-immigrant policies, often fueled by xenophobic language.

The president has largely blocked asylum seekers and refugees fleeing persecution, war and violence. He has built nearly 300 miles of border wall (though without persuading Mexico to pay for it, as he once insisted). He has made it harder for poor people to immigrate to the United States, imposed travel bans on predominantly Muslim countries, and separated migrant children from their parents at the border.

At times, he has used racist messaging, condemning “shithole countries” and complaining that people from Haiti “have AIDS.”

That messaging was at the heart of Mr. Trump’s 2016 campaign, when he complained that Mexico was sending “rapists” and criminals to the United States. At the time, he vowed to build a border wall and used grim and threatening language about immigrants to instill fear in his supporters.

As president, he made good on many of those promises, and again used a fear of immigrants to energize his core supporters during the 2018 midterm elections. He warned, falsely, that migrant caravans from Central America were filled with murderers and criminals when in fact most were families with women and children fleeing persecution, war, famine and violence.

The 2018 effort largely failed as Democrats retook control of the House. But Mr. Trump and his political advisers have signaled that they still intend to use immigration as a central issue in his re-election campaign.

On Tuesday night, the decision to preside over the naturalization ceremony appeared to be intended to soften his attacks on immigration for particular groups of voters: suburbanites, people of color and women who might be put off by his usually strident talk.

After listening to the five immigrants take the oath required to become citizens, Mr. Trump approached the lectern to briefly share each of their stories.

But the strongly anti-immigrant message that he has long delivered to his most fervent supporters is not likely to change anytime soon.

Even though he praised the new citizens, Mr. Trump has long sought to reduce legal immigration into the United States and has recently moved to shrink or eliminate visa programs that allow companies to hire foreigners to work in the United States. Aides to the president brag about the reductions in overall immigration, saying the efforts are helping protect Americans from having to compete with immigrants for jobs.

Just last week, during a briefing from border officials in Yuma, Ariz., the president had similar praise for a very different achievement.