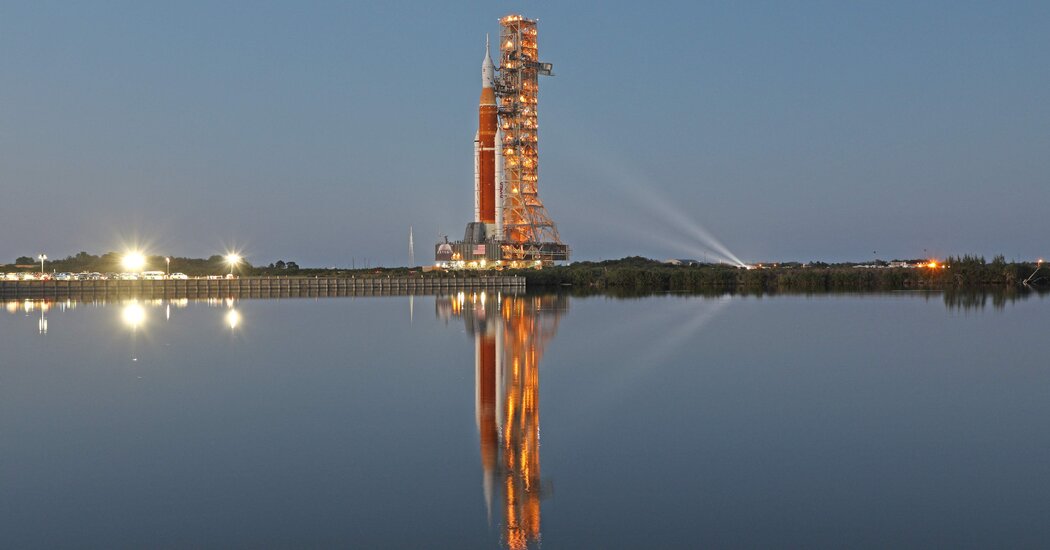 NASA’s giant new moon rocket is finally at the launchpad, although it is yet to be determined when it might finally leave Earth.

For the first time on Thursday evening, a fully stacked Space Launch System rocket and its accompanying launch tower emerged from the Vehicle Assembly Building — essentially a huge garage for rockets — at the Kennedy Space Center in Florida. The rocket, with an Orion capsule on top where astronauts will one day sit, was slowly carried on top of a giant crawler to the launch site more than four miles away.

“Rolling out of the V.A.B., that’s really an iconic moment for this vehicle,” Tom Whitmeyer, deputy associate administrator for exploration systems development at NASA headquarters, said during a news conference on Monday. “To be here for a new generation of a super heavy-lift, exploration-class vehicle, Thursday is going to be a day to remember.”

The journey took more than 10 hours. The rocket reached its destination at 4:15 a.m. on Friday, NASA said.

Thursday and Friday’s scene was reminiscent of the Apollo era of NASA half a century ago when the Saturn 5 rockets used for moon landings made similar journeys to the launchpad. The crawler used on Thursday was the same one that transported the Saturn 5s, albeit refurbished and modernized for Artemis, the new NASA program to return astronauts to the lunar surface one day.

The rocket will sit for the next two weeks as engineers check out various systems on the rocket and launchpad, which is known as Launch Complex 39B. If all goes well, the tests will culminate with a countdown in early April with hundreds of thousands of gallons of cold liquid hydrogen and liquid oxygen flowing into the propellant tanks.

But the engines will not ignite, and the rocket will not leave the ground. This will be what NASA calls a “wet dress rehearsal” — wet because it includes the filling of the liquid propellants — and will be the last major run-through before a launch can occur. The countdown will stop with about 10 seconds left, without the engines igniting.

After the wet dress rehearsal, the rocket will make the return trip to the Vehicle Assembly Building.

The next time that the rocket emerges, it will be for launch. NASA officials say they want to see how the rehearsal goes before they decide when that might be — perhaps as early as this summer.

The first mission will not have any astronauts aboard. The crewless test flight, known as Artemis 1, will first loop around Earth before its second-stage engine pushes it out of low-Earth orbit toward the moon. The Orion capsule will then separate from the second stage and, a few days later, enter orbit around the moon.

The mission, lasting about three weeks, will end with Orion splashing down in the Pacific Ocean.

Both the Space Launch System and the Orion capsule are years behind schedule and billions of dollars over budget.

The moon landing mission will require the use of a separate landing craft, the giant Starship rocket built by SpaceX. Starship may also make its first test flight to space this year.