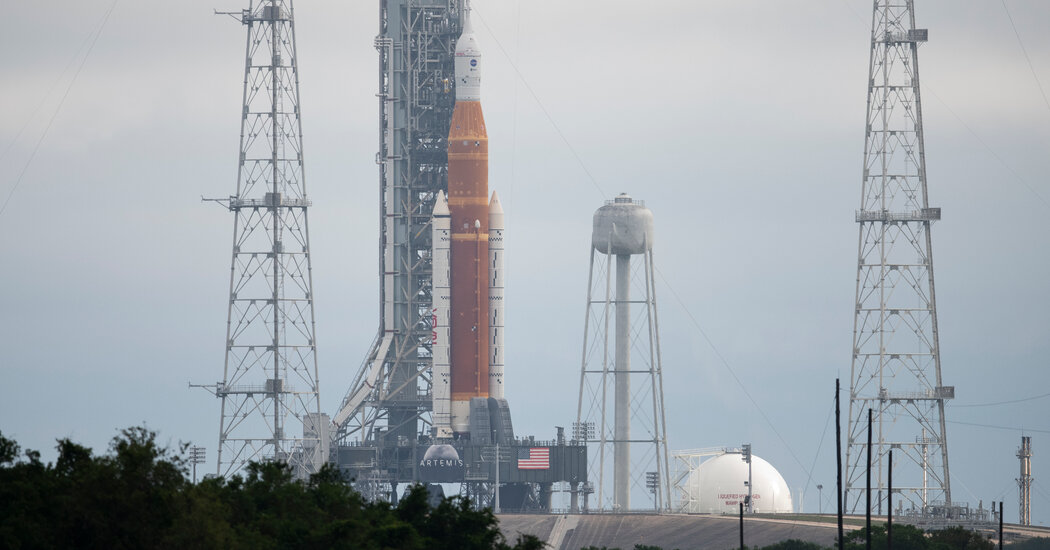 NASA on Sunday morning cut short a practice countdown for its new megarocket, the Space Launch System. It is a key component of upcoming missions to return astronauts to the moon, and the agency said there was a problem with the mobile launch tower.

NASA will try again on Monday.

The 322-foot-tall rocket and its Orion capsule are crucial components for Artemis, NASA’s moon landing program. The system, which can launch astronauts to lunar orbit but will rely on other components to land them on the moon’s surface, is billions of dollars over budget and years behind schedule.

The weekend’s exercise, which NASA calls a wet dress rehearsal, is the last major test before the rocket is launched on its first uncrewed test flight, which could occur as soon as this summer. By simulating a countdown without the excitement of engines igniting and a rocket rising to space, NASA hoped to work out glitches with equipment and procedures.

The rehearsal, which started Friday night, was “wet” because it was to include pumping more than 700,000 gallons of liquid oxygen and liquid hydrogen into the massive rocket’s propellant tanks.

On Saturday afternoon, severe thunderstorms passed over the launch site, with four lightning bolts striking protective towers around the rocket and launcher. Preparation work at the launcher had to be paused during the storm, but after reviewing the data NASA said there was no damage and the countdown could continue.

On Sunday, the dress rehearsal was more than three hours behind schedule. Then the halt occurred just before the propellants were to begin flowing. NASA said the problem was found in the mobile launcher, or the movable tower with numerous systems used to manage the rocket on the ground before it lifts off. Fans that create positive air pressure in enclosed areas on the mobile launcher were not working. The positive pressure is needed to prevent buildup of hazardous gases including ones that could potentially ignite.

The fan has been running since the mobile launcher was moved to the launch site last month and continued to run during the thunderstorm on Saturday, said Charlie Blackwell-Thompson, the launch director, during a news conference Sunday evening.

For the loading of propellants, the fan is switched to a different mode to blow in more air. The fan ran in this mode for several hours before the problem occurred.

“We don’t believe that was related to the lightning,” Ms. Blackwell-Thompson said.

Then a backup fan also failed, apparently for a different reason, leading to the halt in the countdown.

“We decided we wanted to really understand that, given it was the first time loading of the vehicle,” Ms. Blackwell-Thompson said. “And we make the decision to stay down.”

On Monday, the loading of propellants is to begin at 7 a.m. Eastern time with the exercise wrapping up in the afternoon. If the rehearsal runs into more snags, another attempt might be possible on Tuesday.

The first test flight of the Space Launch System, Artemis 1, could occur this summer with the Orion capsule traveling around the moon and back to Earth without astronauts on board. The second Artemis flight, scheduled for 2024, would have astronauts on board for the same trip. Artemis 3 is to be the first lunar landing by astronauts since 1972. NASA has proposed a 2025 date for that crewed trip, but it could face more postponements.