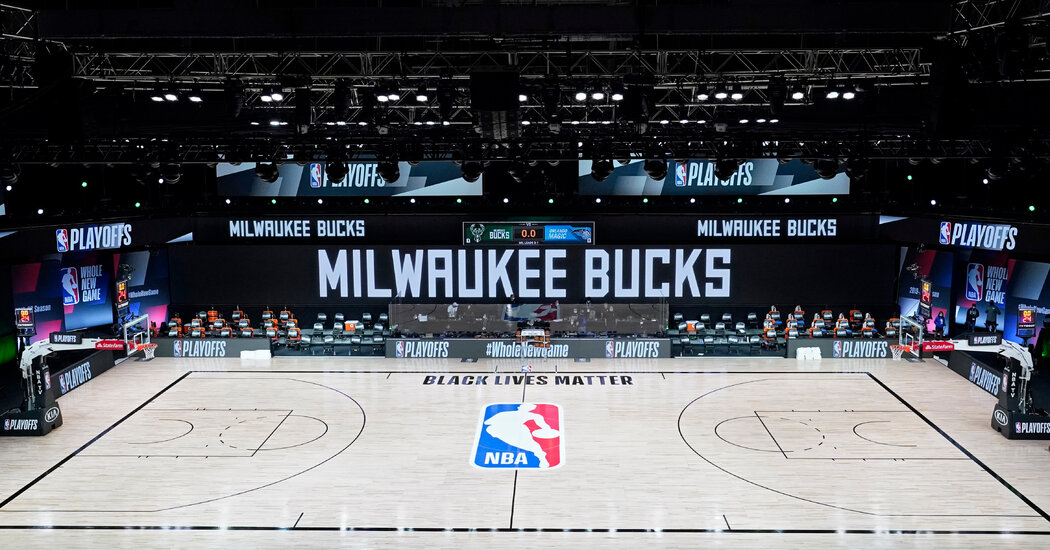 Athletes across the N.B.A., the W.N.B.A., Major League Baseball and Major League Soccer refused to play games on Wednesday after the police shooting of Jacob Blake in Kenosha, Wis., on Sunday.

Three N.B.A. playoff games that were scheduled for Wednesday night were postponed after the Milwaukee Bucks initiated the protest, as were three more matchups on Thursday.

Though the N.B.A. players agreed on Thursday to resume the season, the protest touched off a conversation about terminology. Was it a “boycott,” as LeBron James and other players, and the Bucks’ management, called it? Or was it a strike?

News outlets were divided. Representative Alexandria Ocasio-Cortez, Democrat of New York, set off a debate when she retweeted an image of the one-word headline “Boycott” from the sports section front of The New York Times (“You need to change it to STRIKE,” she wrote).

In follow-up coverage, The Times also referred to the players’ action as a “walkout” and an “unauthorized work stoppage.”

Here’s what some experts in sports law had to say.

What is a strike?

A strike, according to Nolo’s Plain-English Law Dictionary, is broadly defined as an organized work stoppage by employees intended to pressure an employer to meet a series of demands, often including some combination of higher pay, different or better benefits or safer working conditions.

Thomas Lenz, a labor lawyer and law lecturer at the University of Southern California, said the players’ actions could be considered a strike because they were “withholding their services.”

“If players have a scheduled game and they aren’t going to play because we have an issue we want to protest, that’s a strike,” he said.

Asked about players’ use of the word “boycott,” Mr. Lenz noted that calling it a “strike” could have legal and financial ramifications given that the players have a no-strike clause in their collective bargaining agreement with the league.

“I think that in situations involving job actions and withholding of services, people are going to want to phrase it in a way that aligns with their interests,” he said. “That’s not to disparage anyone, given particularly the league seems to be aligned with the players on this. I think that removes a lot of the potential issues between players and teams and the league itself.”

Mr. Lenz likened the players’ action to a protest, because it involved walking out and withholding services. “I think those are all euphemisms for what goes on in a strike situation, which I see this as being, but it’s one that is condoned,” he said.

What is a boycott?

According to legal definitions, a boycott is an organized campaign to starve a business of revenue. The idea is to capture the public’s attention with a goal of influencing how the business operates. A more general definition of a boycott, as offered by Webster’s New World College Dictionary, is “to join together in refusing to deal with, so as to punish, coerce, etc.”

In this case, the N.B.A. players, who are part of a union, appeared to be trying to raise awareness about racial injustice in the United States rather than trying to extract concessions from or cause economic damage to the league or their teams. That has caused some to argue the work stoppage was actually a “boycott,” the players’ preferred terminology.

But Ellen M. Zavian, a professor of sports law at George Washington University, said in her opinion that if the players collectively decided not to work, that is a strike rather than a boycott.

“In sports, the N.B.A. players are employees, part of a union, therefore not independent contractors,” Ms. Zavian said, making their refusal to play a strike.

“Golfers are independent contractors,” she said. “They do not have a union, and if they collectively got together, it could be considered, under antitrust laws, a boycott.”

Some on social media argued that what the players did was more akin to a secondary boycott, in which public pressure is directed at an entity other than the employer, often a company that does business with another company that is involved in a labor dispute.

But Mr. Lenz said the analogy wasn’t apt because the N.B.A. teams’ refusal to play did not involve a labor union going after an employer or a third party to put pressure on an employer. “It’s really, the players and the league,” he said. “They seemed to be aligned and in sync on what’s going on.”

League officials did not know of the Milwaukee Bucks’ plans to not play on Wednesday before they walked out.

What is a wildcat strike?

Another phrase that found its way into the social media discourse was a so-called wildcat strike, an old term for an unauthorized strike or work stoppage without a vote by union membership.

Mr. Lenz said that wildcat strikes were often sudden and involved some element of shock value. “It’s something unannounced,” he said.

“Given that the league and teams have expressed support for the players on the issues they have raised, I think management has aligned themselves with the players,” he said. “It’s a wildcat strike in the sense that we didn’t know yesterday morning that this was going to happen. But when it did happen, management didn’t lash out.”