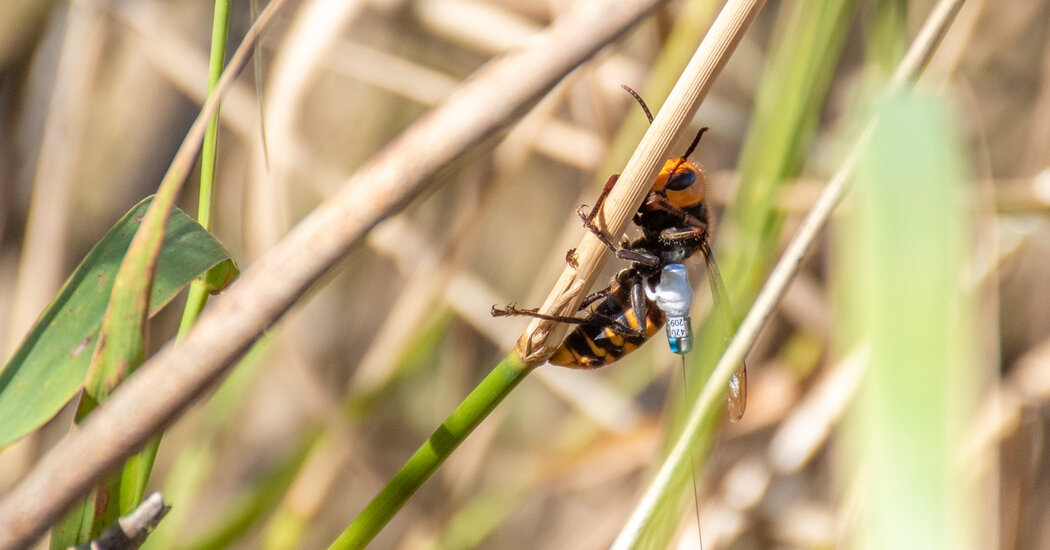 Like detectives closing in on a fugitive hide-out deep in the woods, officials in Washington State announced on Friday that they had located the first murder hornet nest in the United States, tucked in a tree hollow near the Canadian border.

The officials said they planned to destroy the nest in Blaine, Wash., on Saturday before the voracious Asian giant hornets could multiply and begin laying waste to bees that are vital to the survival of the region’s raspberries, blueberries and other crops.

The discovery of the nest — which may contain 100 to 200 hornets — came after weeks of hunting and trapping the insects, which are notorious for using their powerful mandibles to attack and destroy honeybee hives in a matter of hours.

The colony was located in a region of forests and farmland on Thursday, after officials attached radio trackers to three trapped hornets. One of those led them to the nest, which was about eight feet up in a tree on private property near an area that had been cleared for a house.

Asian giant hornets typically nest in the ground, but officials said they had seen dozens of the powerful hornets buzzing in and out of the hollow.

At a news conference on Friday, Sven Spichiger, an entomologist with the Washington State Department of Agriculture, recalled stumbling upon the nest as he followed the radio signal from a hornet until it had grown very strong.

“And at that point,” Mr. Spichiger said, “I actually heard a hornet buzz over my head, so we assumed she had left the location. But then we heard another one buzz over my head, and I took a step back and realized we were actually standing right under the nest. We had in fact tracked her straight back to where she came from. And so we were pretty happy about that.”

Asian giant hornets, which some researchers call murder hornets, burrowed into the American psyche last year after they were discovered for the first time in the United States, in Washington State, prompting officials to issue a pest alert and warn that the hornets pose a threat to honeybees.

At up to two inches long, Asian giant hornets are the world’s largest hornets, and their potent stinger can deliver agonizingly painful venom. In Japan, the hornets kill up to 50 people a year.

In Washington State, officials have been trying to find a nest quickly because the hornets are about to enter their “slaughter phase.” That’s when they attack beehives in force, removing and decapitating every bee inside and then harvesting the brood and pupae for food.

Using a network of traps, state entomologists have been meticulously tracking sightings of the hornets since the first one was trapped earlier this year.

Officials had a sense they were closing in on their quarry last month, when a pastor who lives near Blaine, which is about 30 miles south of Vancouver, spotted Asian giant hornets landing on a wasp’s nest in his shop.

Chris Looney, a state entomologist who went to the property to investigate, managed to catch one of the hornets in a net — the first one caught alive in the United States, according to the department.

But an attempt to attach a tracking device to one of the hornets failed when a dot of glue on a hornet didn’t dry fast enough, Mr. Spichiger said, and the tracking device slipped off just as officials were about to release the insect.

This time, he said, the radio trackers stuck, with the help of glue and dental floss.

To eradicate the nest, Mr. Spichiger said, officials plan to fill the tree hollow with foam and then wrap it in plastic wrap. Officials will then vacuum the hornets into a canister and save some of them for research, he said.

Mr. Spichiger said members of the elimination crew would wear thick white suits with rubber gloves and boots as well as face shields that can protect them from the hornets’ venom, which can cause debilitating eye injuries.

“They will be stinging the suits and, hopefully, they will not go all the way through,” he said. “We will find out tomorrow morning whether they really work.”