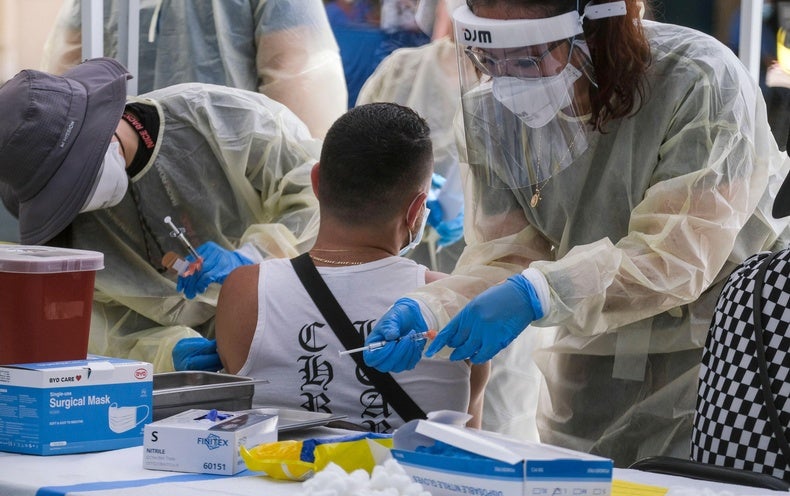 Monkeypox is a disease caused by a virus in the orthopoxvirus group, which includes smallpox. The monkeypox virus—a DNA virus—was first identified in monkeys in a lab in Denmark in 1958, but it is more typically found in rodents and other animals. It has caused periodic outbreaks since the 1970s in Central and West Africa, where the virus has been found in several animal species. The virus has occasionally infected people outside of Africa; in 2003 people in the U.S. were sickened after contact with infected pet prairie dogs. In May 2022 the virus began spreading in Europe, the U.S. and other countries. The first U.S. case in the current outbreak was identified on May 18 in Massachusetts. As of August 15, there were 36,589 confirmed cases worldwide, including 11,890 cases in the U.S. The World Health Organization declared monkeypox a public health emergency of international concern on July 23, and the U.S. secretary of health and human services declared monkeypox a national public health emergency on August 4.

How is monkeypox transmitted?

The virus is thought to spread most efficiently through close, skin-to-skin contact with an infected person’s pus-filled lesions—including through sex. But it is not exclusively a sexually transmitted disease. It can spread through close contact of any kind and may also spread through contact with contaminated objects such as bedding, clothing, or eating utensils or through exposure to respiratory droplets at close range.

“Most [transmission] is probably direct contact,” says Paul Auwaerter, clinical director of the division of infectious diseases at Johns Hopkins University School of Medicine. A recent Centers for Disease Control and Prevention report found that 99 percent of U.S. cases occurred in men, 94 percent of whom reported recent male-to-male sexual or intimate contact. “Although [sex is] one mechanism, I don’t think it is correct to label it an STD [sexually transmitted disease]” because the virus can be transmitted through other forms of close contact or objects, Auwaerter says. Rather “it’s one way we believe transmission can occur.”

Wafaa El-Sadr, a professor of epidemiology and medicine at Columbia University, adds, “It’s not proven thus far whether it is a sexually transmitted infection, and that’s the reason why I prefer to say that it is ’transmitted during sex.’”

The illness generally lasts two to four weeks. Scientists are still figuring out whether the virus can be transmitted by people without symptoms.

What are the symptoms?

The main symptoms are a pimplelike or blisterlike rash and flulike symptoms, including fever, fatigue and swollen lymph nodes. People can have just a rash and no flulike symptoms, or vice versa. In the current outbreak, cases often present with lesions on the genitals or anus, sometimes with penile swelling or rectal pain, known as proctitis. Lesions can also appear on the face, hands, feet and other body parts. Symptoms usually appear within three weeks of infection. The lesions eventually scab over and fall off, usually within two to four weeks.

How severe is it?

The currently circulating strain of monkeypox is usually not fatal, although there have been a handful of deaths in the current outbreak, all of them outside the U.S. Most of the cases have been mild to moderate and resolved on their own with supportive care. “It’s from the same family as smallpox. But importantly, it does not cause disease as severe as smallpox,” El-Sadr says. The blisters can be extremely painful, however, and some people have been hospitalized for pain treatment. People who are immunocompromised may be at greater risk for severe illness, as are children.

“It seems to have a much lower case-fatality rate than SARS-CoV-2,” the virus that causes COVID, Auwaerter notes. “But that’s not to say it can’t cause great deal of disability, pain, discomfort.”

Who is most at risk?

Historically, the disease has affected people—often malnourished children—in Central and West Africa, according to Auwaerter. But in the current outbreak, most of the cases so far have been in gay, bisexual or other men who have sex with men (MSM), particularly those who have had multiple or anonymous sex partners. At this time, the risk to the general public is thought to be low. This does not mean the virus can only spread in the MSM community, however. In the current outbreak, there have also been cases in children and health care workers exposed to monkeypox patients, and the virus could spread to different populations over time, as HIV has.

What should you do if you have monkeypox or its symptoms?

If you have symptoms of monkeypox, have recently had close or intimate contact with someone who has monkeypox or have had multiple or anonymous sex partners in the MSM community, you may want to see a doctor and get tested. Although initially limited to only a few CDC laboratories, testing is now available at labs around the country, including Labcorp, Quest Diagnostics and others. The test typically involves swab samples taken from the characteristic “pimples.” It’s important to get care as soon as possible in order to prevent further transmission and to get treatment, if needed.

If you have monkeypox, you should isolate from other people as much as possible until your lesions have scabbed over and fallen off. “People who are diagnosed with monkeypox should really strictly isolate,” meaning staying in a separate room in the household and not mixing with other people, El-Sadr says. “They can only leave the house for emergency reasons. And if they do, they also need to cover any sores or rash they have on their body,” she says.

“The most important thing is for the person himself or herself to be aware of monkeypox so they can go and get evaluated,” El-Sadr says. “At the same time, it’s important for the providers to be aware of it as well.”

What treatments are available?

There are no specifically approved treatments for monkeypox. An antiviral drug called tecovirimat (TPOXX) in the Strategic National Stockpile, which is approved for smallpox, can be prescribed for monkeypox. But federal bureaucracy has hindered access to the drug: medical providers must fill out paperwork to use it under an expanded-access investigational new drug (IND) protocol. The CDC and the Food and Drug Administration have simplified the process somewhat, allowing providers to dispense the medication before completing the paperwork. To access TPOXX, patients must also meet certain criteria, including severe disease, hospitalization or immune suppression, Auwaerter says. It is also not clear how effective TPOXX is in humans because there are very few data (the drug was approved for smallpox based on data on monkeypox and similar viruses in animals). If the secretary of health and human services issues the necessary additional emergency declaration under Section 564 of the Federal Food, Drug, and Cosmetic Act, the FDA could declare an emergency use authorization (EUA) for the drug to make it easier to access.*

What vaccines are available?

There are two vaccines for monkeypox. The FDA approved the JYNNEOS vaccine, made by Bavarian Nordic, for monkeypox and smallpox. This is the preferred vaccine because of its safety and the fact that it contains a virus that cannot replicate in the body. The stockpile also contains millions of doses of another vaccine, called ACAM2000, which is approved for smallpox and available for monkeypox under an IND. But the vaccine is known to cause adverse effects, and it should not be used in people who are immunocompromised, such as those living with HIV.

The two-dose JYNNEOS vaccine has been in short supply as a result of poor planning, including a failure to process the vaccine into vials and to inspect a facility in Denmark where doses were stored. As of August 9, the Department of Health and Human Services had allocated 1.1 million doses to states and jurisdictions and shipped more than 620,000 of those doses. Some states have already been giving only first doses of the two-dose vaccine regimen until they have more supply.

The FDA has approved a strategy—known as dose sparing—for stretching out vaccine supplies.

What is dose sparing, and how does it work?

Dose sparing is a strategy for vaccinating more people by giving them smaller doses of vaccine. The FDA recently issued an EUA for the JYNNEOS vaccine to be given as one fifth of a regular dose by an intradermal route—a shallow injection under the skin, which is thought to generate strong protection with a smaller dose. The EUA was based in part on data from a 2015 study that found that this dosage and injection method produced a similar immune response to that in people who received a normal subcutaneous injection. This vaccination method is fairly uncommon; it is used, for example, to perform tuberculosis skin tests. There is some concern that not all health care providers will be able to perform intradermal injections properly: If they are too deep, the patient might not get enough of the dose. If they are too shallow, the vaccine could leak out. Nevertheless, the strategy significantly increases the amount of people that can be vaccinated.

How can we avoid stigmatizing the community that is currently most affected by monkeypox?

Many health experts have raised concerns about stigma toward the MSM community, which is currently the most at risk of the current outbreak of monkeypox infection. “Men who have sex with men in many settings are often stigmatized and discriminated against, and I fear that if that happens, then that’s kind of going to stand in the way of us being able to control this outbreak,” El-Sadr says. And this could have ripple effects to the broader population as well. “If you stigmatize a group of individuals, what’s going to happen is that they’re not going to come forth to be diagnosed if they suspect that they may have this infection. They are not going to come in and get vaccinated,” El-Sadr says. And that jeopardizes control of the outbreak, she adds.

Can the monkeypox outbreak be contained, or will it become endemic worldwide?

Experts warn that if we don’t get monkeypox under control, it will become endemic in the U.S. and elsewhere. Some think it’s already too late.

“I think it’s going to really depend on what happens over the next, I would say, maybe the next two or three months or so,” El-Sadr says. If awareness of the virus, testing and vaccination can be expanded, “I think we have a chance,” she says. “But the window of opportunity is closing fast.”

*Editor’s Note (08/17/22): This sentence was edited after posting to clarify the conditions necessary for the Food and Drug Administration to issue an emergency use authorization for TPOXX.