Modi Is Worsening the Suffering from India’s Pandemic 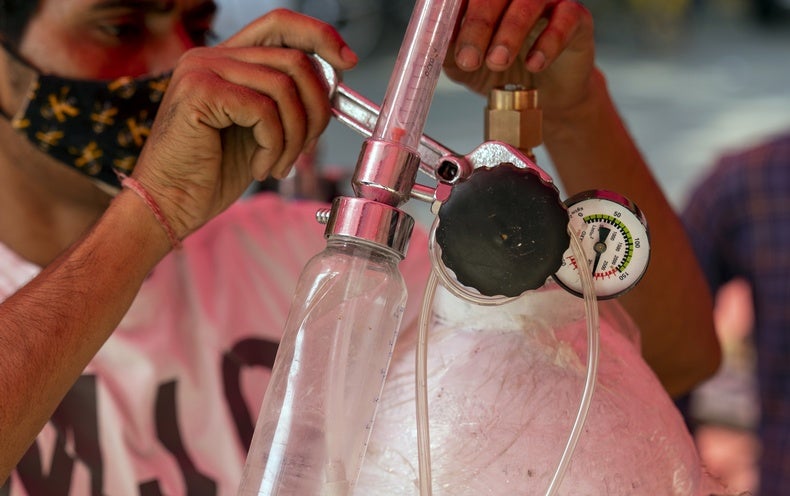 On May 8, 2021, as a deadly second wave of the COVID pandemic was ripping through India, an imprisoned doctoral student made an urgent appeal to the Delhi High Court. Incarcerated by the Indian government since May 2020 on dubious terror charges, Natasha Narwal asked for interim bail to see her father, agricultural scientist Mahavir Narwal, who was in an intensive care unit with the virus. The court procrastinated. She would never see her father again: he died the following evening, one among the 4,000 daily COVID fatalities India is currently reporting—undoubtedly an undercount.

Days earlier, a member of parliament, Manoj Jha, had amplified an SOS plea for an oxygen cylinder or hospital bed for the elder Narwal. Jha’s tweet was one among thousands of anguished requests for oxygen, hospital beds, medicines and relief that have consumed India’s social networks from early April. As the nation repored caseloads nearly equivalent to those of the rest of the world put together, the massive scale of the distress has exposed Prime Minister Narendra Modi’s multiple failures. These include prematurely declaring victory in the war against the virus despite scientists’ warnings of an imminent “second wave”; helping instead to spread the infection by addressing packed election rallies and featuring in front-page newspaper advertisements that invited devotees to a religious festival, ultimately attended by millions; and neglecting to provision for medical resources and relief needed in a second wave or to put in place a vaccination plan for a billion people.

The pandemic is now ravaging vast areas of rural India, where health infrastructure barely exists, and thousands are falling ill and dying, beyond the reach of social media SOS calls and far from the public eye. The Modi government downplays the catastrophe by claiming that caseloads are stabilizing. It is left to intrepid local journalists reporting on the hundreds of corpses on the banks of the sacred Ganga River to expose the lie.

As Indians reel under what is undoubtedly the greatest crisis the country has seen since the 1940s, Modi remains fatally aloof and focused on image management. As thousands die, he is spending an estimated $2.8 billion of public money to demolish and remake the prime minister’s residence, parliament and other buildings in the heart of New Delhi, categorizing the project as “an essential service.”

Meanwhile civil society organisations (CSOs), activists and ordinary citizens are left firefighting with meager resources to help strangers and save lives. Volunteers track availability of hospital beds, drugs and oxygen cylinders. Doctors offer pro bono telecounseling. Gurudwaras, the places of worship for the Sikh religion, provide oxygen to drive-in patients. A hardscrabble auto-rickshaw driver equips his vehicle with an oxygen cylinder and an oximeter to ferry poor patients to hospitals. Countless groups prepare and distribute food packets to those in need. Some Good Samaritans are even helping families bury or cremate loved ones.

The ruling BJP party’s crisis management, on the other hand, has involved clamping down on distress calls—pushing the Supreme Court to admonish that those seeking help on social media cannot be slapped with criminal cases. In the past days, the police questioned an opposition-party leader at the forefront of providing COVID relief. On May 18, BJP leaders tweeted what they described was an opposition party’s “toolkit,” which a fact-checking website concluded was doctored, and Twitter subsequently tagged as “manipulated media.” The so-called toolkit depicted the opposition party as using the pandemic to attack Modi’s image, and multiple ministers, including the Health Minister, amplified its questionable content.

A journalist and an activist were arrested after they said that, contrary to what multiple BJP leaders claimed, cow urine and cow dung were not cures for COVID. When a court granted them bail on May 17, the police immediately arrested them again under a national security law.

The police have also arrested people who merely put up posters in New Delhi questioning the prime minister’s vaccine policy. Freedom of speech has hit such an ebb that in BJP-ruled Uttar Pradesh, one of its own legislators said he feared he would be booked for sedition if he “spoke too much” on his party’s pandemic policies. The state, with a population akin to that of Brazil, is among India’s worst hit, and on May 23, when young doctors tried to meet its Chief Minister to voice their concerns, police whisked them away.

By going after those who seek help, or who question or critique the government’s abandonment of Indians during the COVID catastrophe, the regime is extending a repressive apparatus it has finessed through its seven-year rule to target grassroots activists, human-rights defenders, academics and journalists. As an ongoing database by Article 14, a Web site reporting on law and justice whose editorial board I serve on, shows, national-security laws are being increasingly deployed to service political repression. At the receiving end of this abuse of the law are some of India’s most dedicated advocates of social justice.

These include Mahesh Raut, a community organizer in central India, where over 300 villages have asked for his release; Akhil Gogoi, a peasant activist in the northeastern state of Assam who in early May won a state legislative election from jail, where he has been held since December 2019; Stan Swamy, an aged Jesuit sociologist and Parkinson’s patient who at the time of his arrest in October 2020 was a lead petitioner in a public-interest litigation for the release of Dalit and Adivasi undertrials (people incarcerated without trial, often for years) in the state of Jharkhand; Khalid Saifi, a Delhi-based activist with United Against Hate, a group campaigning against hate crimes; Anand Teltumbde, a leading academic and thinker; and Sudha Bharadwaj and Surendra Gadling, veteran human-rights lawyers who have been in prison since mid-2018 without bail or trial.

India’s Supreme Court recently ordered the decongestion of jails and parole for undertrials to reduce the risk of virus outbreaks in India’s prisons. As per the government’s own data, nearly 70 percent of those in jail are undertrials—many of whom are likely to be innocent of the crimes they are accused of. But activists, academics and social workers like those above can expect little relief because the Modi government has booked them under draconian antiterrorism laws and vehemently opposes their bail pleas in court. Earlier this month, agonized families of several human-rights defenders told the press that the pandemic was turning prisons into death traps with overcrowded barracks, COVID-infected inmates, little access to doctors, medicines or COVID vaccines, and an occasional phone call at the mercy of authorities serving as the only link to the outside world.

Many of these jailed activists would otherwise have been at the front lines of the pandemic effort. Natasha Narwal was arrested while engaged in providing relief to workers, millions of whom were plunged into distress by Modi’s decision in March 2020 to impose a nationwide lockdown with no safety net—and with a mere four-hour notice.

The government’s inhumane treatment of the detainees is of a piece with a broader demonization of civil society that has forced numerous groups like Amnesty International to cut back or entirely shut down operations in India. Despite its repression and harassment of CSOs, the Modi government leaned on them last year to help address the humanitarian distress that ensued from its ill-planned lockdown. But it continues to sabotage their effectiveness. Last September, the government unilaterally issued restrictions that entangled many CSOs in red tape and ended their freedom to channel foreign donations to on-ground partners. These restrictions have severely impaired their ability to receive and distribute foreign aid and relief to grassroots groups working to mitigate the pandemic’s impact on the most vulnerable communities in rural India.

The Indian government must urgently abandon the repression that is intensifying the COVID calamity and instead take steps that will bring all hands on deck to ease the suffering. Releasing the nation’s finest activists from prison would be a good place to start.

More to explore: India Is Targeting Defenders of Indigenous Rights as “Terrorists”

Selfish genes fight each other with DNA-destroying CRISPR systems