Minneapolis Teachers Reach a Tentative Deal to End Their Strike 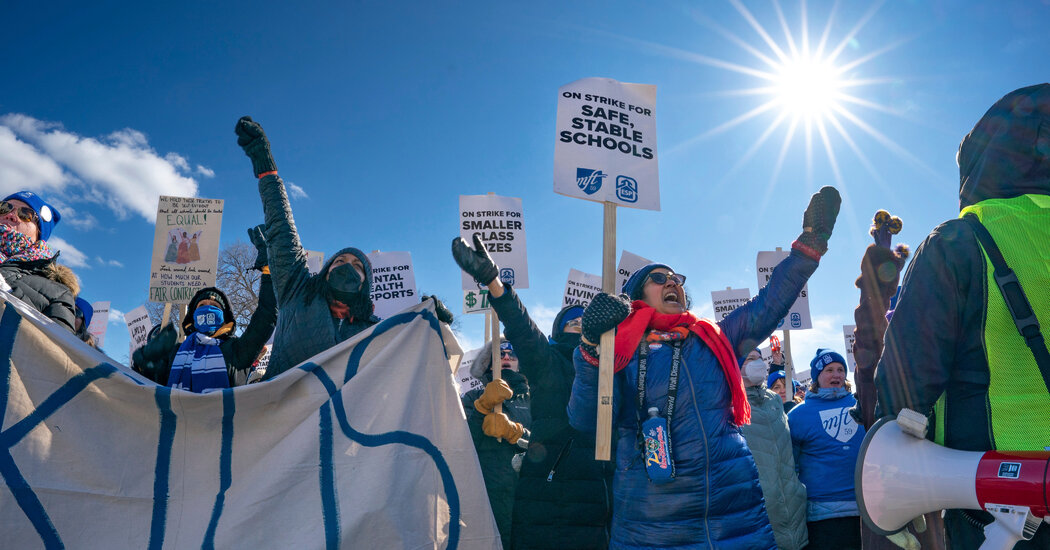 Educators and school district officials in Minneapolis reached a tentative deal on Friday morning to end a teachers’ strike, resolving a nearly three-week standoff that had shuttered classrooms for about 30,000 public school students.

The teachers’ union said that members were expected to vote on the agreement this weekend. If it is approved, students could be back in school as early as Monday.

Few details of the agreement have been released, but the Minneapolis Federation of Teachers and Educational Support Professionals said in a statement: “It is important to note that major gains were made on pay for education support professionals, protections for educators of color, class size caps and mental health supports.”

The teachers’ strike, which began on March 8 and left many parents scrambling for child care, was the first in the district in more than 50 years.

In California, a teachers’ strike continues in Sacramento, where the public school district serves more than 40,000 students from kindergarten through high school.

David Fisher, who leads the Sacramento City Teachers Association, said on Friday that a staffing crisis in the district had become difficult to manage. “On some days, at some schools, it’s hard to even run the schools because there are so few adults on campus,” he said.

In Minneapolis, negotiations between the union and the district — over salaries, hiring and retention practices and resources for students’ mental health — often lasted late into the night. The teachers’ union pointed to budget surpluses in Minnesota and said that money and power in the district have been concentrated at the top, while educators have struggled to do more with less.

The district has argued that its revenues would not be enough to cover additional expenses, in part because of falling enrollment, rising costs and decades of underfunding. Enrollment in the city’s public schools from kindergarten through 12th grade fell to just below 30,000 at the start of this school year, down from nearly 33,600 in the fall of 2019.

Ed Graff, the superintendent, said on Friday said that more information about the deal would be shared once the details were finalized.

“Families wanted their children back in school, and that was the No. 1 priority,” he said. “They definitely had experienced enough disruption with the pandemic.” In January, students in Minneapolis attended classes remotely for two weeks because of staff shortages related to the coronavirus.

Shaun Laden, who leads the branch of the union that represents education support professionals, said it was likely that the school day would grow slightly and that the school year would extend by a week or more to make up for lost time.

He added that while some details of the deal have yet to be finalized, it involves strengthening job protections for hundreds of employees of color and raising pay for educational support professionals “significantly.” He said some positions in which workers once started with a salary of about $24,000 would now bring in something closer to $35,000 by the employee’s second year.

“We have said all along that this is not only about the amount of money our district has,” Mr. Laden added, “but how we choose to use it.”

Lesley Lavery, an associate professor of political science at Macalester College in St. Paul, Minn., and the author of “A Collective Pursuit: Teachers’ Unions and Education Reform,” said that the Minneapolis strike was an example of bargaining for the common good, which blurs the lines among economic, political and environmental demands — for example, by calling not only for better pay but also for smaller classes and better mental health support for students.

“It’s all about the whole package,” she said. “I think we’re going to see more districts start to do that.”

But Professor Lavery added that wages would likely remain a major sticking point in education labor battles across the United States, as low wages continue to make it difficult for school districts to compete with other employers.

“In many states, the teacher pay hasn’t caught up to where it was before the 2008 recession,” she said. “We’ve just seen another recession, and I just think that has played into it. We might see more of this.”

When the Omicron variant sent Covid cases surging earlier this year, teachers’ unions across the United States raised concerns about understaffing because of illnesses and shortages of tests and masks. In Chicago, home to the country’s third-largest school district, a week of classes was canceled after teachers’ union members argued that classrooms were unsafe. Schools reopened after a deal was announced on Jan. 10.

Nikki Milevsky, a vice president of the teachers’ union that is striking in Sacramento, commended the Minneapolis union for securing staffing deals and better mental health support systems for students there.