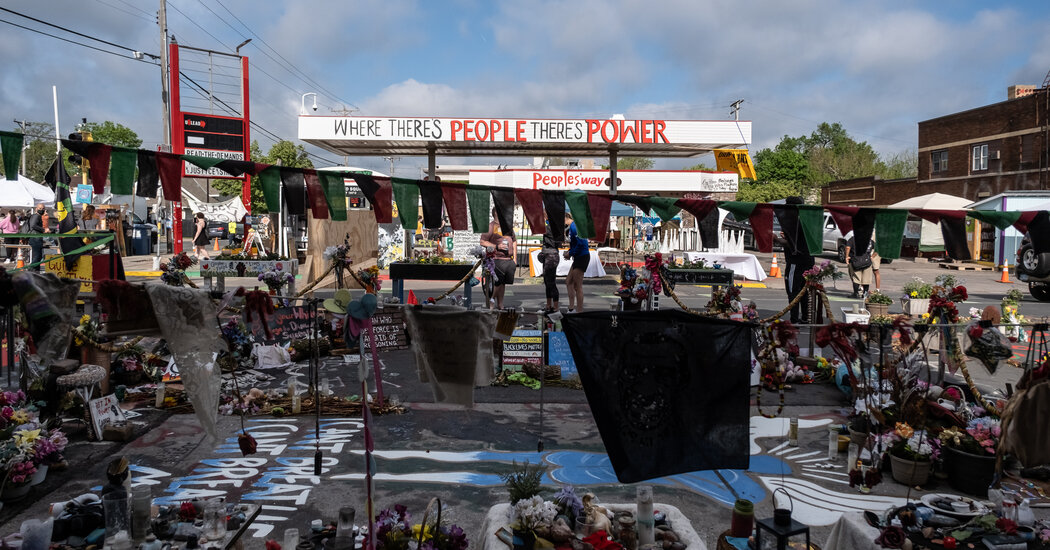 MINNEAPOLIS — The bulldozers arrived before dawn on Thursday at the South Minneapolis intersection where the police killed George Floyd. Moving quickly, city workers in neon vests hauled away flowers, artwork and large cement barricades that have allowed the corner to serve as an ever-growing memorial to Mr. Floyd for more than a year.

By the time hundreds of people began flocking to the scene in protest, many of the tributes at the intersection known as George Floyd Square were gone. The large metal fist that sprouts from the middle of 38th Street and Chicago Avenue was still there, but the barriers that activists used to block traffic had been removed and the city had put most of the items honoring Mr. Floyd into storage.

The mayor and other city officials hoped that the effort would let traffic flow through the intersection again, allowing businesses to prosper and cutting down on the violence in the neighborhood. But demonstrators said that the unannounced action was disrespectful to Mr. Floyd’s memory and that the city was trying to force people to move on from his killing.

In the weeks after May 25, 2020, when a police officer knelt on Mr. Floyd’s neck as he took his last breaths, the intersection was transformed into a community space that people visited from around the world, to pay their respects or simply to say they had been there. In April, hundreds of people gathered in the intersection and erupted in cheers when Derek Chauvin, the white former officer, was found guilty of murdering Mr. Floyd, a Black father who had recently lost his job as a security guard.

But the intersection had also become an autonomous zone of sorts that the police avoided; some residents complained that it had become dangerous and detrimental to nearby businesses. Several shootings have erupted in the area, including when one man was shot in broad daylight on the anniversary of Mr. Floyd’s death last month.

For months, the question of how to preserve the memorial while allowing the neighborhood’s businesses and residents to thrive has vexed city officials. They have announced a series of investments in the area and changed the name of Chicago Avenue to George Perry Floyd Jr. Place for two blocks.

Even as some residents and businesses praised the removal of the sprawling memorial on Thursday, others set up new makeshift barriers to block traffic in the one-block radius around the intersection, using lawn chairs, a drying machine and an air-conditioner. By the afternoon, traffic was not able to pass freely through the intersection as city officials had hoped.

“I acknowledge that it will be a bit touch-and-go and difficult over the next several days,” Mayor Jacob Frey of Minneapolis said at a news conference.

Mr. Frey said the city was investing in Black-owned businesses in the area and that reopening the streets to traffic was just one part of creating an accessible and prosperous neighborhood. “We will be putting our money where our mouth is,” he said.

But others said it was too soon to clear the area, and that doing so with little warning early in the morning was not consistent with city officials’ repeated promises of transparency following Mr. Floyd’s death.

“I think it’s wrong,” said D.J. Hooker, a community activist who arrived early on Thursday after hearing that the memorial was being taken down. “This is not what they should be doing while people are trying to still heal.”

As protesters were at the intersection on Thursday afternoon, they got word that police officers had fatally shot a man at a parking garage elsewhere in the city.

A spokesman for the Hennepin County Sheriff’s Office sent a statement from the U.S. Marshals Service, a federal agency, that said its task force members had killed a man who was sitting in a parked car after he showed a handgun. The statement said the task force members, which are often made up of local police officers, were trying to arrest the man on a warrant related to a gun charge, but the agency did not identify the man or the officers who fired.

Jeremy Zoss, the spokesman for the Sheriff’s Office, would not say whether sheriff’s deputies were the ones who shot the man. A spokesman for the Minneapolis Police Department said its officers were not involved.

In clearing George Floyd Square, the city partnered with the Agape Movement, an organization that has provided security in the neighborhood since Mr. Floyd’s death and has worked to improve the relationship between the police and residents. It has several contracts with the city, including one for up to $359,000 for help with revitalizing the intersection, said Sarah McKenzie, a city spokeswoman.

Steve Floyd, a senior member of the Agape Movement, said at the news conference with city officials that it was important to start making the neighborhood more prosperous and peaceful. Mr. Floyd, who is not related to George Floyd, said that he had spoken with many residents in recent months about clearing the intersection and that he had coordinated with the city about when to do so to avoid pushback.

Agape Movement members, some of whom have spoken about being former members of gangs, have received harsh criticism from some activists for working with the city, but Mr. Floyd said the city’s investment was an example of how local governments can fund community groups instead of the police.

The city crews arrived at about 4:30 a.m. on Thursday and began to remove the memorial structures outside of Cup Foods, the convenience store where a clerk called 911 last year to say he thought that Mr. Floyd had used a fake $20 bill to buy cigarettes, drawing Mr. Chauvin and other officers to the scene.

In a statement, Mr. Frey and the two City Council members who represent the neighborhood, Andrea Jenkins and Alondra Cano, said they were “committed to establishing a permanent memorial at the intersection.” The politicians said in the statement that the city was “playing a supportive role” in helping the Agape Movement and other community leaders clear the area, though one member of the Agape Movement dismissed the idea that city officials were not in charge.

“That is the narrative,” said Akeem Cubie, 32, who said the Agape Movement had advised city officials about how to peacefully reopen the intersection. “They don’t want to take the backlash coming in here.”

But Mr. Cubie, who grew up near the intersection and now lives elsewhere in Minneapolis, said that the neighborhood had become a hub for gangs and that clearing the memorial would make it safer for the community.

On Thursday, a representative of Cup Foods praised the city’s move to reopen the area to traffic.

“Businesses can once again thrive,” said Jamar Nelson, who has worked as a spokesman for Cup Foods since Mr. Floyd’s death. “Now, hopefully, a memorial can be put in place, to respect the Floyd family and the community.”

Danielle Fabunmi, 48, who lives about six blocks away from the intersection, stood in front of Cup Foods on Thursday as she watched city workers dismantle the memorial. She said she felt that the city had bowed to pressure from businesses and residents worried about crime.

“I kind of always knew that it wasn’t going to last, but I’m pretty hurt because there needs to be a reminder of what happened here,” Ms. Fabunmi said. “They’re really feeling that a lot of these memorials are kind of getting in the way of business, so that’s to be understood, but also, there’s something larger at hand.”

The scene on Thursday was at times tense, with some activists yelling at city officials as they removed the barriers. “No justice, no streets!” one said. But later, the crowd grew more relaxed, with one activist handing out coffee and doughnuts. No uniformed police officers could be seen as the demolition took place.