Minneapolis mayor: After year of reckoning, time for change 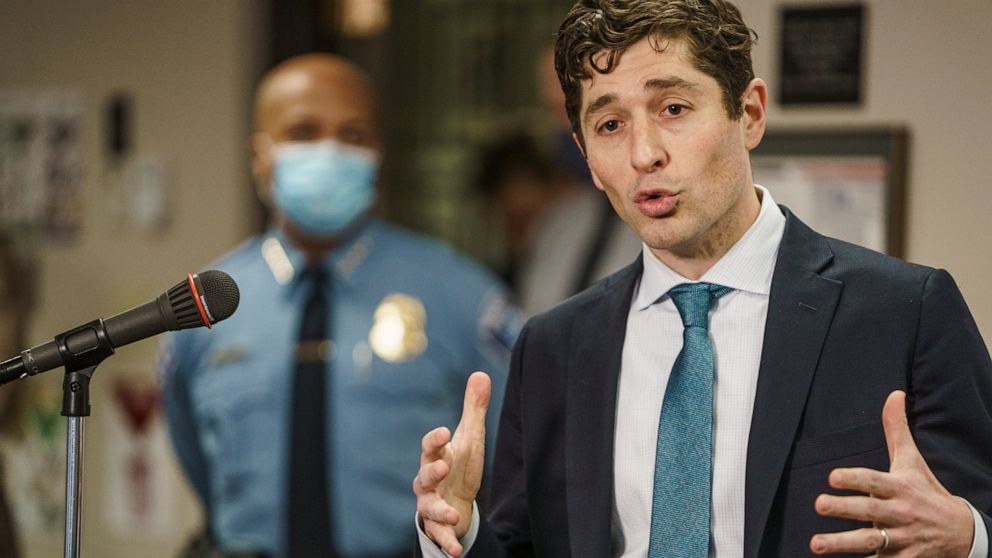 From the death of George Floyd to the recent death of a 6-year-old girl from gun violence, the mayor of Minneapolis says his city has experienced one trauma after another this past year — and the city’s Black community has felt the pain the most

MINNEAPOLIS — From COVID-19 to a budget shortfall, or George Floyd ‘s death to the recent death of a 6-year-old girl from gun violence, the mayor of Minneapolis says his city has experienced one trauma after another this past year — and the Black community has felt the most pain.

As Mayor Jacob Frey pushes ahead with a public safety proposal that he says will help keep neighborhoods safe and hold police accountable, he is reflecting on lessons learned and where the city goes from here.

“Right now, our city has come and has seen a moment of racial reckoning, perhaps hundreds of years in the making. There is a true acknowledgment that the way we have done things in the past is not acceptable,” Frey told The Associated Press this week.

“I think the next step that everybody is looking for is to be able to galvanize and channel all of that collective energy and pain and frustration to getting true progress,” he said.

City leaders have been under pressure to change policing since the May 25 death of Floyd, a Black man who died after then-Officer Derek Chauvin knelt on his neck and pinned him to the ground for about 9 1/2 minutes.

Chauvin was convicted of murder and manslaughter, and three other officers await trial on aiding and abetting charges. The four also face federal charges of violating Floyd’s civil rights, and the police department is the focus of federal and state investigations into its practices.

“Right now, our entire city is recognizing the magnitude of this moment and we are seeing a deep and collective push for change,” said Frey, who is seeking reelection in 2022.

Some of Frey’s proposals include immediate changes, such as prioritizing funding for additional cameras in high-crime areas. Frey said his plan would also address disparities in traffic stops by committing to ending stops for low-level offenses, such as a busted taillight.

Frey believes not every 911 call requires an officer with a gun to respond, and his plan will target resources toward the city’s Office of Violence Prevention, as well as address some root causes of crime, such as inadequate housing and job opportunities.

Frey and Police Chief Medaria Arradondo have already overhauled the department’s use of force policy and expanded criteria for what constitutes use of force, which has led to an increase in use-of-force reports, he said. That has provided more transparency, as well as an opportunity to work with officers and prevent similar conduct in the future. They’ve also made internal changes to strengthen the disciplinary process, but Frey said issues with arbitration continue to be a roadblock to getting rid of problem officers.

“If we’re really serious about culture shift, this needs to be addressed,” he said.

Frey’s plan also focuses on recruitment; the police department is currently down about one-third of officers. When asked whether the decrease in staffing has led to the recent increase in crime, Frey said attrition has had an impact, but other factors are also at play, including the pandemic, kids not being in school or recreational activities, and a lack of job opportunities.

The city is also working on reopening the intersection where Floyd was arrested, known as George Floyd Square. Some activists and residents who serve as unofficial leaders at the square say they won’t agree to reopening it unless the city meets a list of demands.

Frey said the square will remain focused on racial justice and healing, and that the city is working on long-term plans to memorialize Floyd’s legacy, including investing in Black-owned businesses. But, he said, the area has also been harmed by gun violence, and the city needs to provide services.

“This is a beautifully diverse community … It’s a community that deserves to feel safe,” he said.

After the anniversary of Floyd’s death, he said the city will move toward a phased reopening and “safe and peaceful reconnection.”