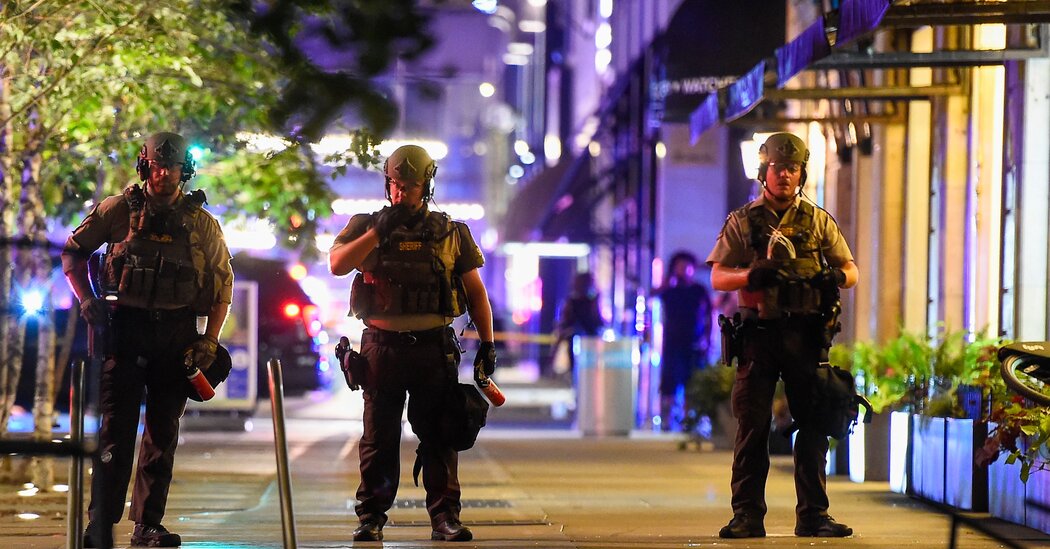 A Black man who was wanted in a homicide fatally shot himself as the police closed in on a downtown Minneapolis street on Wednesday evening, prompting a fresh round of protests and looting, the authorities said, three months after the killing of George Floyd in the city set off global demonstrations against police violence.

Gov. Tim Walz of Minnesota said the State Patrol was headed to the city to help restore order, and that he had deployed the National Guard. Mayor Jacob Frey of Minneapolis said he had ordered an immediate curfew.

“What our city needs right now is healing,” Mr. Frey said at a news conference with the city police chief, Medaria Arradondo, on Wednesday night. “We do not need more destruction. We do not need property damage that is unacceptable in every way, shape and form, and I want to be very clear: It will not be tolerated.”

Later Wednesday evening, the police released video of the man shooting himself, saying it was important to quell rumors that he had been killed by the police.

“People need to know the facts,” Chief Arradondo said, as he echoed the mayor’s demand that people leave the downtown.

“We have teams assembled,” he said. “We will clear out our downtown. And for those who choose to cause destruction or cause violence, you will be arrested.”

The unrest came as the city was still grappling with the killing in May of Mr. Floyd, who was Black, after he was pinned down by a white Minneapolis officer who knelt on his neck. It also came as protesters have flooded into the streets of Kenosha, Wis., to condemn the shooting of Jacob Blake, a Black father who was partially paralyzed after a white officer fired at him in front of his children.

The man who shot himself in Minneapolis had been wanted in a homicide that occurred about 2:10 p.m. Wednesday, the police said. He and a woman had been fighting with another man when he pulled out a gun and shot the victim, killing him, the police said.

The police and Mr. Frey emphasized that the man had not been killed by the police. The police have not released his name.

“No officer weapons were fired,” the Minneapolis police wrote on the department’s Facebook page, in a statement accompanying a video of the man shooting himself. “This is a tragedy for our community that is still hurting. Our condolences go to the families of the victims.”

After the man was killed, the police said, protesters surged into downtown Minneapolis. Their numbers varied but there might have been about 500 at one point, Chief Arradondo said, and local news footage on Wednesday night showed people going in and out of a downtown department store, some emerging with merchandise.

Chief Arradondo said preliminary assessments indicated broken windows and possibly shoplifting. He said the police would have a better sense of the damage after restoring order.

Mr. Walz said he had deployed the National Guard at the request of Mr. Frey. The governor said multiple law enforcement agencies were seeking to enforce the city’s curfew.

“The pain that people are feeling is real,” Mr. Walz said at a news conference on Wednesday night, recalling the killing of Mr. Floyd.

On Twitter, Mr. Frey thanked the governor for his “partnership and support” and urged “everyone to keep the peace and immediately go home.”