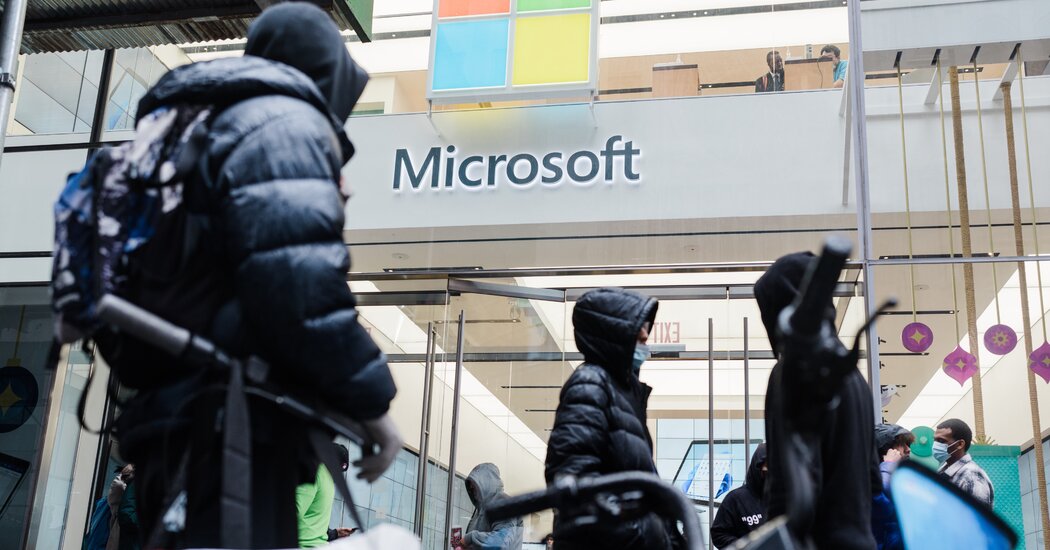 Microsoft has an ambitious plan to cut its carbon emissions. But on Thursday, the company reported a big increase in the greenhouse gases emanating from its operations and its products, a reminder of the challenges that companies face as they try to clean up their businesses.

Microsoft’s carbon emissions were up 21.5 percent in the 12 months through June 2021, after small declines in 2020 and 2019. The increase was almost entirely driven by emissions from energy used to build data centers and make devices — like the Xbox and the Surface tablet — and from the power that Microsoft estimates its products consume when people used them.

Microsoft has sought to show that with committed leaders and sufficient funding, companies can effectively reduce their net emissions to zero in the coming years, bolstering international efforts to limit the rise in global temperatures. But the surge in Microsoft’s emissions suggests that it and other companies may have trouble meeting their goals. And since the increase resulted from strong demand for products, it is a reminder that robust business growth can often mean pumping more greenhouse gases into the atmosphere.

Still, Microsoft’s leaders say they can be “carbon negative” by the end of the decade, by cutting emissions and using a variety of measures to remove carbon from the atmosphere. “We’re still absolutely committed to — and absolutely sure of our ability to meet — our 2030 commitment,” said Lucas Joppa, Microsoft’s chief environmental officer.

Many large companies have some sort of plan to cut their emissions, and they face pressure from shareholders to do more. Investors have also pressed oil and gas companies to move from fossil fuels to renewable energy.

Microsoft is the first large tech company to report this year on the progress of its sustainability efforts. Apple, Google and Facebook’s parent, Meta, all aim to get their net carbon emissions to zero by 2030. Amazon, which has a large delivery network and much more extensive supply chains, has a 2040 goal to do the same.

“None of this is going to be easy for any company — decarbonization is a challenge,” said Laura Draucker, a director at Ceres, a nonprofit group that works with investors and companies to address environmental challenges. But when large tech companies like Microsoft report setbacks on their emissions, she added, it should prompt them to press jointly for policies that promote “affordable, equitable access to clean energy.”

“It doesn’t have any impact on their competitive advantage,” she added.

In a new move, Microsoft indicated on Thursday that it would no longer do specialized work for energy companies involved in extracting fossil fuels unless they had a “net zero” target. The term means having no carbon emissions overall, a goal companies typically hope to achieve through a combination of emissions reductions and carbon removal.

And Dr. Joppa said the recent disruptions in the oil and gas markets had not convinced him of the need to slow the move toward renewable sources of energy. “I would say that I have not seen anything that convinces me that we should do anything other than continue to go faster,” he said.

Microsoft is also active in pressing its climate agenda beyond its own business. When the Securities and Exchange Commission asked the public for input on how corporate climate change disclosures might be standardized, Microsoft said it would support the commission’s development of such disclosure rules.

Government moves to push companies to adopt climate policies could meet some resistance in Washington — especially since the spike in energy prices caused by Russia’s invasion of Ukraine has led to calls to step up oil and gas production.

“Private companies are free to pursue net-zero policies regardless of their sense — as long as they’re following the law, this isn’t a matter of public policy,” said Katie Tubb, senior policy analyst for energy and environment at the Heritage Foundation, a conservative policy group, in an email. “Of greater concern are policymakers trying to use the force of government to pressure or even require such efforts in the private sector.”

In theory, Microsoft’s huge profits give it the means to achieve its goals. And the company has had success cutting emissions from its own operations and from the electricity that powers those operations, known as Scope 1 and Scope 2 emissions in industry jargon. These fell 17 percent in the 12 months through June, and with greater purchases of clean power and efficiency measures, the company aims to get those emissions down to near zero by 2025, a goal that Dr. Joppa said Microsoft still expect to achieve.

Much harder is reducing Scope 3 emissions — those from a company’s supply chains and its customers. Microsoft’s Scope 3 emissions are nearly 50 times as large as Scopes 1 and 2 combined, and they rose 23 percent in the year through June, after small declines in previous years. The jump came from three main sources: energy used to build data centers; power consumed by suppliers; and energy expended when customers used Microsoft devices, which ballooned as the pandemic drove Xbox use.

Even so, Microsoft aims to more than halve its Scope 3 emissions by 2030. The company said on Thursday that it was working to reduce carbon emissions from construction and to make its devices more energy efficient.

And by removing millions of tons of carbon a year from the air, Microsoft hopes to reduce its total emissions to zero or lower on a net basis by the end of the decade.

One important factor will be the rapid development of carbon removal technologies, which are operating on a small scale and are expensive. Reforestation is currently Microsoft’s main method of carbon removal. The company said it had contracts for 2.5 million metric tons of carbon removal, but that represents only 18 percent of its carbon emissions in the year through June. Dr. Joppa said Microsoft could meet its goals even if technology that removed carbon directly from the air did not work.

But Dr. Draucker of Ceres said that even if more use were made of carbon removal, companies would need to reduce the emissions they generated.