Michigan police have released footage of a black man being shot in the back of the head by a white cop during a struggle over a Taser following a traffic stop, prompting calls for justice as the family’s attorney claims ‘unnecessary, excessive used of force was used.’

Amid public outcry for transparency, police released the footage on Wednesday showing Patrick Lyoya, 26, facedown on the ground as he is fatally shot by the officer in Grand Rapids on April 4.

The newly released footage also shows the moments leading up to the shooting, including the traffic stop over suspicions involving his license plate, which led to a brief foot chase and struggle over the cop’s Taser.

Lyoya’s family have retained prominent civil rights attorney Ben Crump, who has been dubbed ‘Black America’s Attorney General,’ also represented the families of George Floyd, Breonna Taylor, Michael Brown and others. He is calling for the officer to be fired and prosecuted.

‘The video clearly shows that this was an unnecessary, excessive, and fatal use of force against an unarmed Black man who was confused by the encounter and terrified for his life,’ Crump said in a release.

Grand Rapids police officials have placed the officer, a seven-year veteran who has not been named publicly, on administrative leave and have asked the Michigan State Police to investigate the shooting.

Michigan State Police have launched an investigation into the fatal shooting. Kent County’s chief medical examiner, Dr. Stephen Cohle, said he completed the autopsy but toxicology tests have not been finished.

Prosecutors in Kent County told CNN on Wednesday that they will make a decision on possible criminal charges once the investigation is complete. 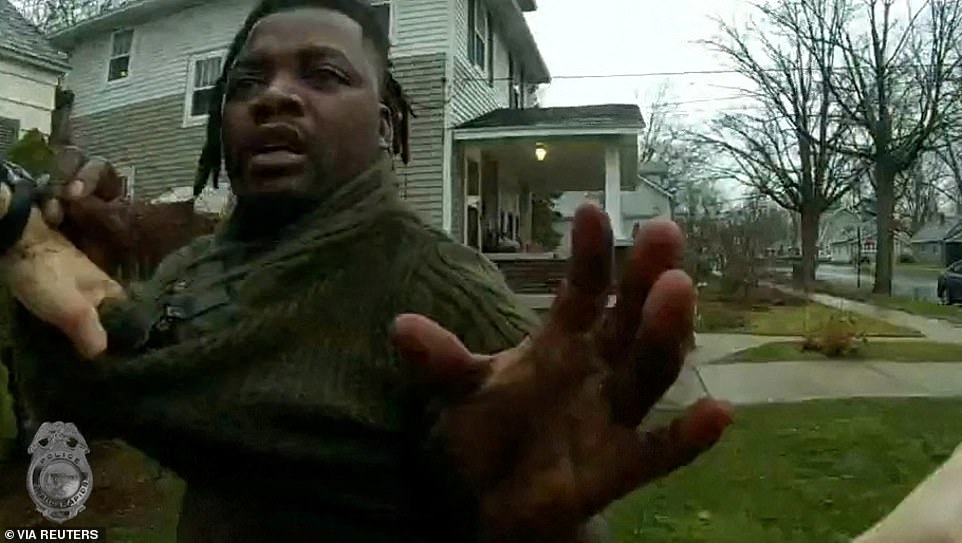 Patrick Lyoya, 26, was lying face down when he was fatally shot in the back of the head by a white police officer outside a house in Grand Rapids, Michigan, on April 4 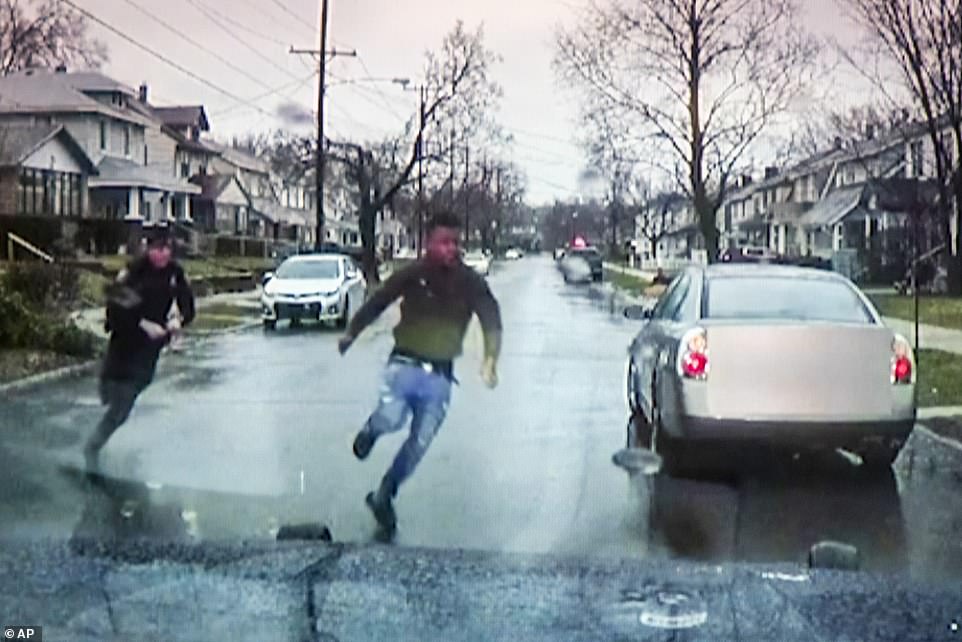 Michigan police released footage of the shooting, and the events leading up to it, including the traffic stop that led to a brief foot chase and struggle over the cop’s Taser

Citing a need for transparency, the city’s new police chief, Eric Winstrom, released four videos Wednesday, including critical footage of the shooting recorded by a passenger in Lyoya’s car on that rainy morning.

‘I view it as a tragedy. … It was a progression of sadness for me,’ said Winstrom, a former high-ranking Chicago police commander who became Grand Rapids chief in March. The city of about 200,000 people is about 150 miles (240 kilometers) northwest of Detroit.

The videos released on Wednesday by police were taken from the dashboard of the officer’s squad car, from his body-worn camera and from a neighbor’s surveillance camera.

The traffic stop was tense from the start.

Lyoya, a native of the Democratic Republic of Congo, is seen stepping out of the car on a rainy street, seemingly confused and asking ‘what did I do?’ as the officer repeatedly asks for a driver’s license and orders him to get back inside the vehicle.

‘I’m stopping ya, do you have a license? Do you have a driver’s license, do you speak English?’ he asks.

Lyoya confirms he speaks English and opens the driver’s side door and speaks to his passenger.

He then shuts his door, turns his back to the officer and appears to walk away.

‘No, no, no, stop, stop,’ the officer is heard saying, and puts his hands on Lyoya’s shoulder.

Lyoya is seen resisting the officer and then starts running until the officer tackles him to the ground. 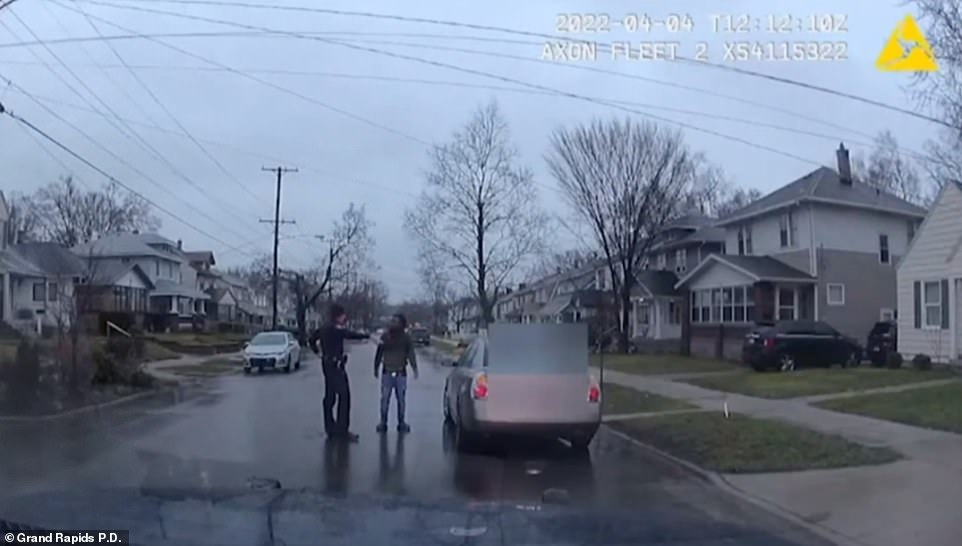 The videos show Lyoya stepping out of the car on a rainy street, seemingly confused and asking ‘what did I do?’ as the policeman repeatedly asks for a driver’s license and orders him to get back inside the vehicle 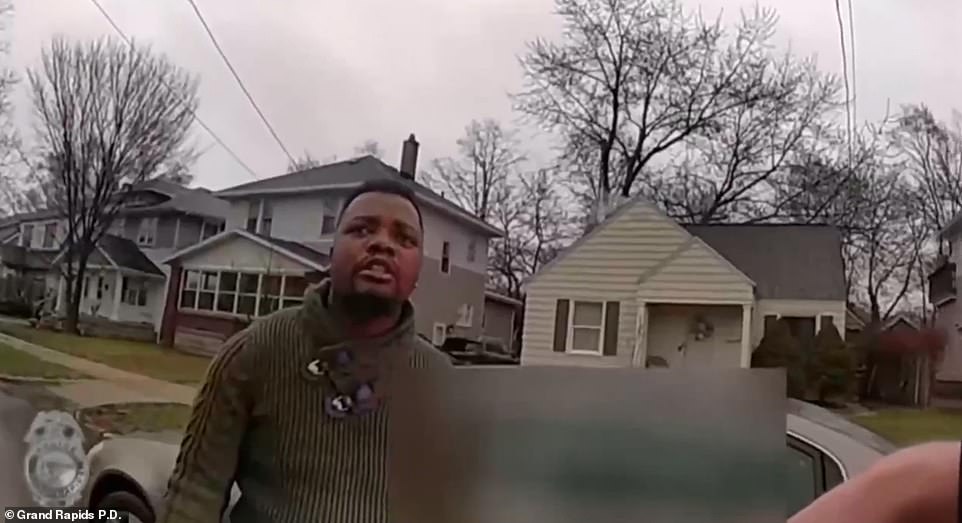 Lyoya appears to be complying, but then closes the driver-side door and attempts to walk away, resisting the officers attempts to handcuff him

Video shows Lyoya running from the officer who stopped him for driving with a license plate that didn’t belong to the vehicle. They grapple in front of several homes while Lyoya’s passenger got out and watched

They grapple in front of several homes while Lyoya’s passenger got out and watched.

The officer repeatedly orders Lyoya to ‘let go’ of his Taser, at one point demanding: ‘Drop the Taser!’

This is when the officer’s body camera was deactivated, Winstrom said, adding that it takes pushing a button for three seconds to turn off the body camera and he thought the pressure from Lyoya’s body caused the deactivation.

‘The Michigan State Police independent investigation into the incident is not complete.

‘This is an extremely critical incident, and one that everyone involved in the investigation is taking very seriously’

‘…while the videos released today are an important piece of evidence, they are not all of the evidence…

The full autopsy report will not be publicly available until state police conclude their investigation.

The medical examiner said the family has also been offered the opportunity to seek an independent autopsy.

Video footage from a neighborhood home surveillance camera shows another angle of the incident and captures what the body cam did not due to deactivation – the scuffle over the Taser and then Lyoya being shot dead.

Winstrom said the fight over the Taser lasted about 90 seconds. In the final moments, the officer was on top of Lyoya, kneeling on his back at times to subdue him.

‘From my view of the video, Taser was deployed twice. Taser did not make contact,’ Winstrom told reporters. ‘And Mr. Lyoya was shot in the head. However, that’s the only information that I have.’

Audio from the neighborhood home surveillance camera captured the sound of the officer shooting Lyoya.

Winstrom has not yet identified the officer, but said he is on paid leave during the investigation.

‘Me being from Chicago for the last 20 years, I’ve handled many police shootings myself, so I do have a lot of experience in this,’ the chief said. ‘I was hoping to never have to utilize that experience here.’

Prosecutor Chris Becker, who will decide whether any charges are warranted, objected to the release but said Winstrom could act on his own.

But Becker said the public shouldn’t expect a quick decision.

‘While the videos released today are an important piece of evidence, they are not all of the evidence,’ he said.

City Manager Mark Washington warned that the videos would lead to ‘expressions of shock, of anger and of pain.’ 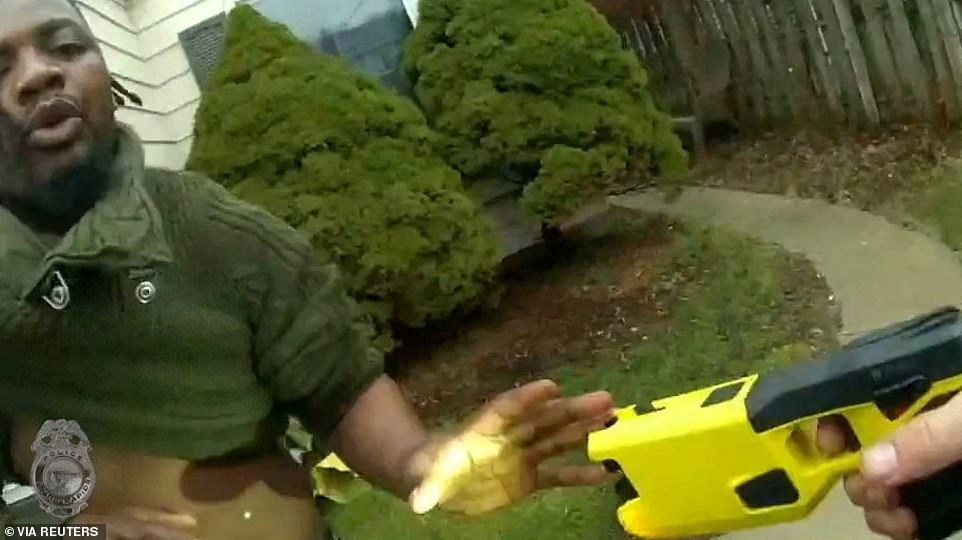 Video shows Lyoya, a native of the Democratic Republic of Congo, and the officer struggle over the cop’s Taser shortly before Lyoya was shot dead

The white officer repeatedly orders Lyoya to ‘let go’ of his Taser, at one point demanding: ‘Drop the Taser!’ 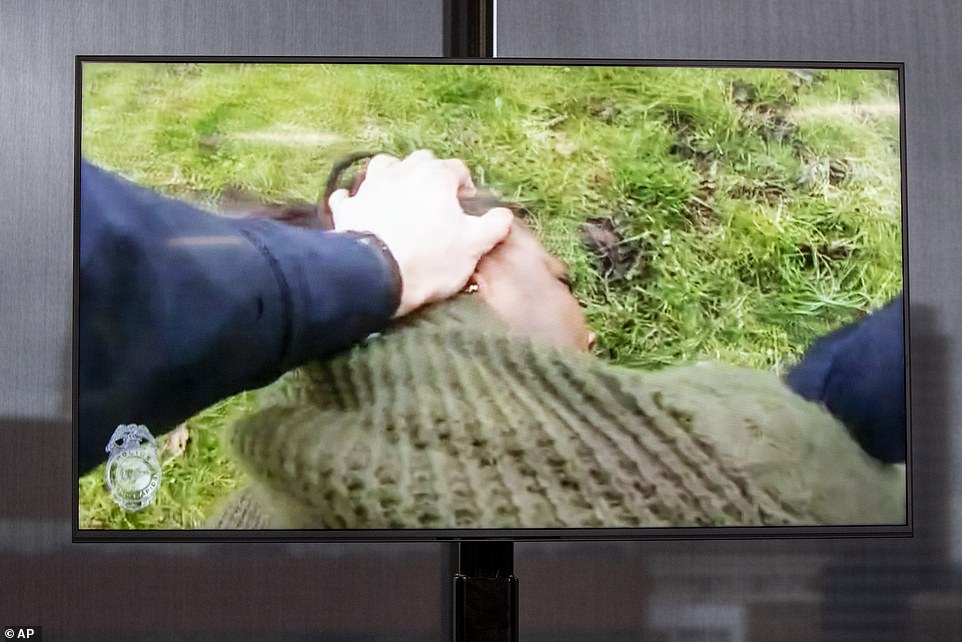 ‘He arrived in the United States as a refugee with his family fleeing violence. He had his whole life ahead of him,’ Whitmer, a Democrat, said.

Lyoya’s family moved from the Democratic Republic of Congo to the U.S in 2014, have been working closely with their representative, Pastor Israel Siku, who also serves as their interpreter. 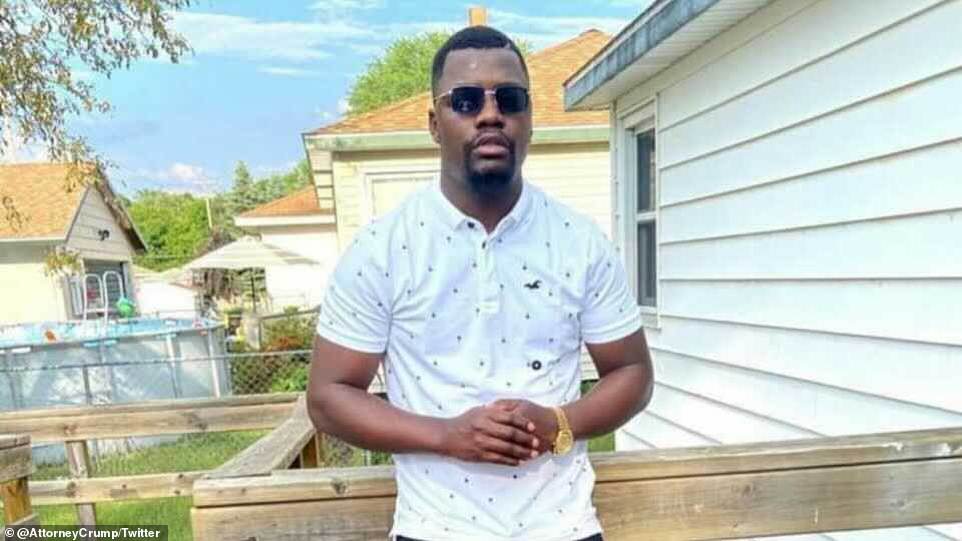 Patrick Lyoya, who arrived in the United States in 2014 as a refugee with his family fleeing violence, had two young daughters and five siblings. ‘He had his whole life ahead of him,’ Gov. Gretchen Whitmer said

He told CNN he was with Lyoya’s father, Peter, when they reviewed the video of the shooting.

Siku described the father’s reaction to seeing the video: ‘He melt(ed) down, he didn’t have anything to say. He almost passed out.’

Siku told a church full of people on Sunday, ‘I saw the video, I could not sleep.’

‘The boy was on the floor, the cop as he lays on him, pulls up the gun and shoots him in the head and back up. Patrick did not move,’ he added.

Winstrom last week said he met Lyoya’s father and that they both cried.

‘I get it as a father. … It’s just heart-wrenching,’ the chief told WOOD-TV. 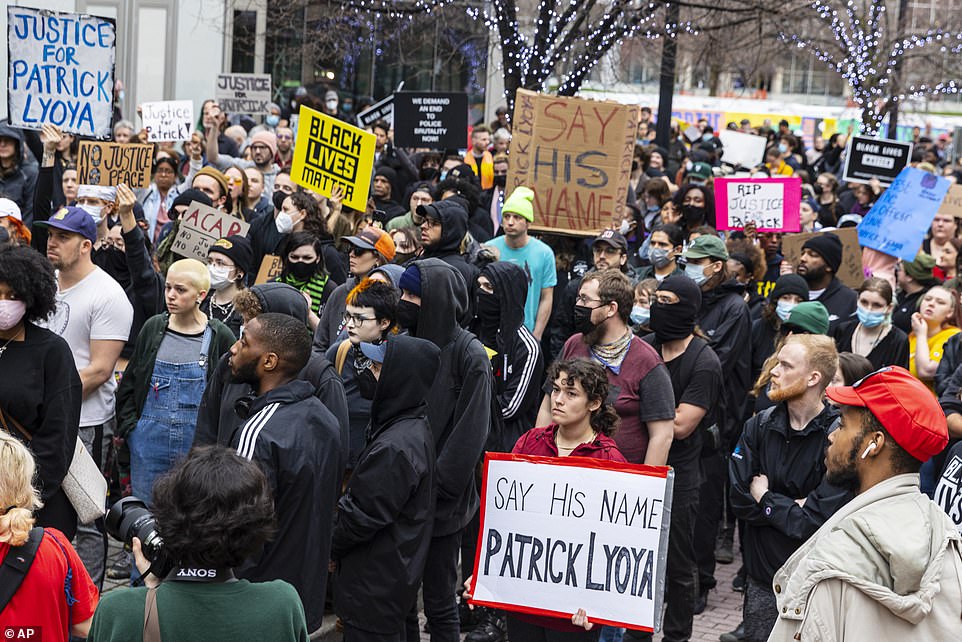 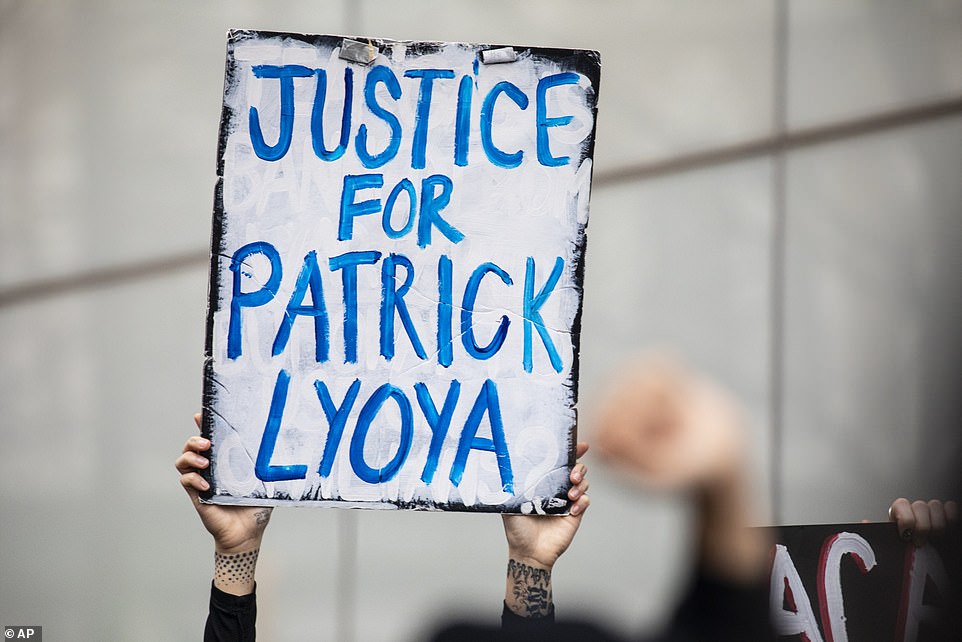 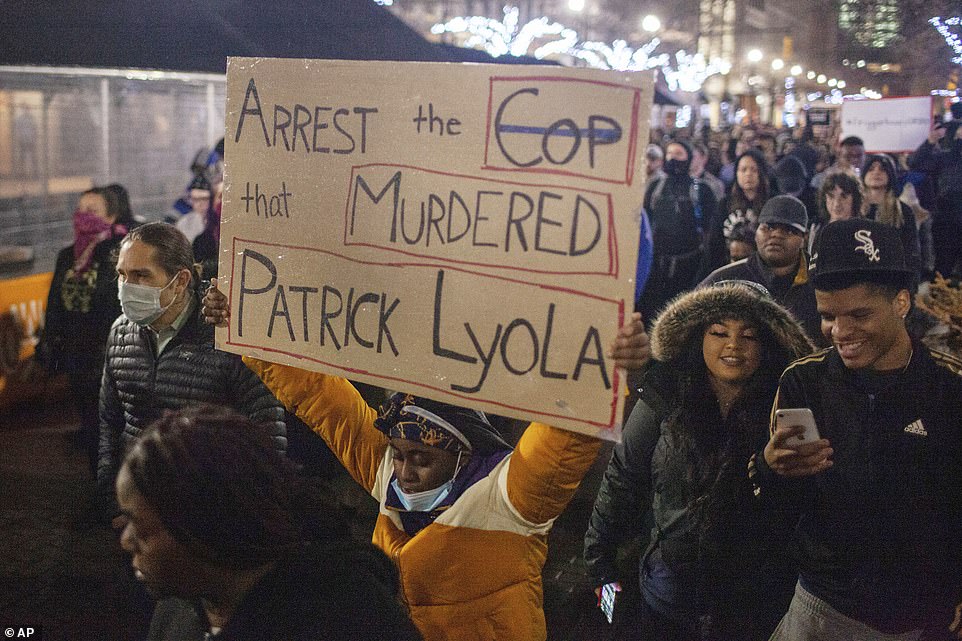 The April 4 death of Lyoya has outraged members of his family and touched off protests in Grand Rapids by activists who say it represents the latest example of police violence against young Black men.

‘Another Black man has died at the hands of police, and the officer in this video has got to be held accountable,’ the NAACP said in a written statement responding to the video.

‘President Biden, sign the police reform executive order now. While we fully understand an executive order is not a substitute for meaningful legislation, we must do everything in our power to protect our community,’ the NAACP said.

On Wednesday, several hundred protesters gathered outside the Grand Rapids Police Department following the release of the videos with some cursing and shouting from behind barricades.

The group demanded that officials make public the name of the officer in the shooting.

Some businesses cut their hours short Wednesday, closing early. Some boarded up windows. But the demonstration remained non-violent with protesters demanding justice for Lyoya and other Black lives lost in shootings involving police. 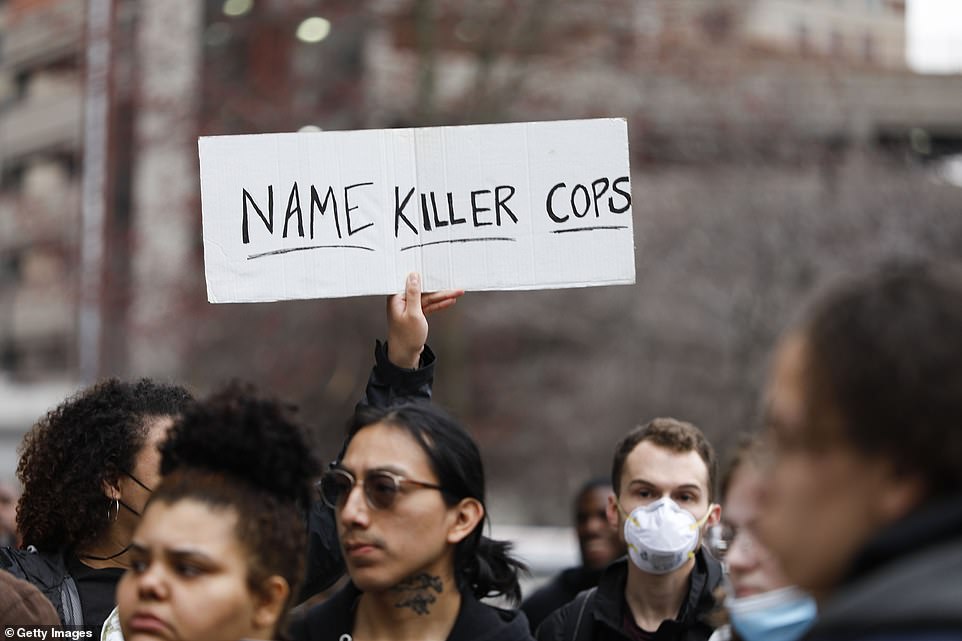 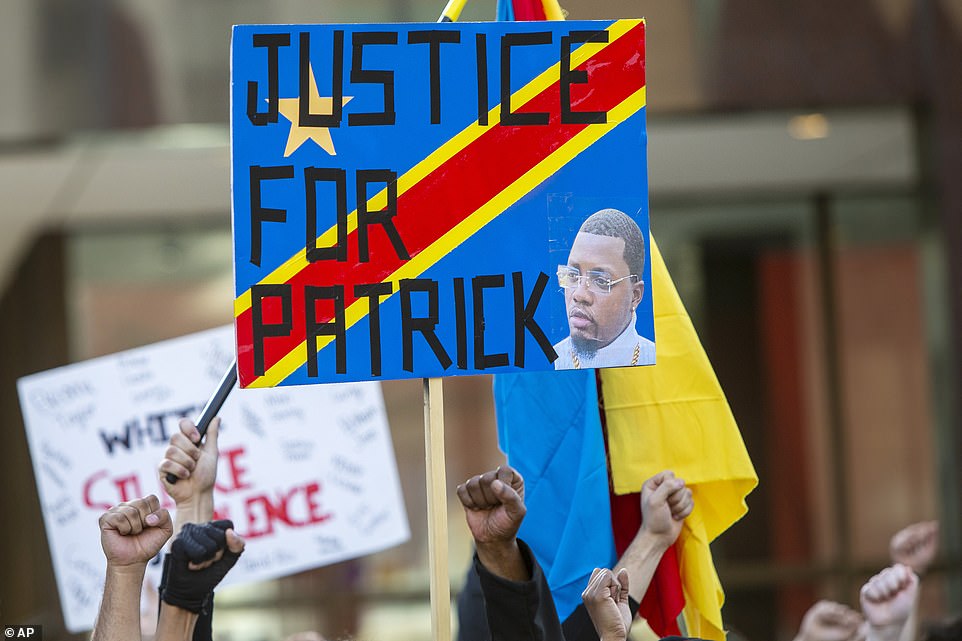 Activists rally for Patrick Lyoya in Grand Rapids, Michigan on Tuesday, April 12, after he was shot by a police officer 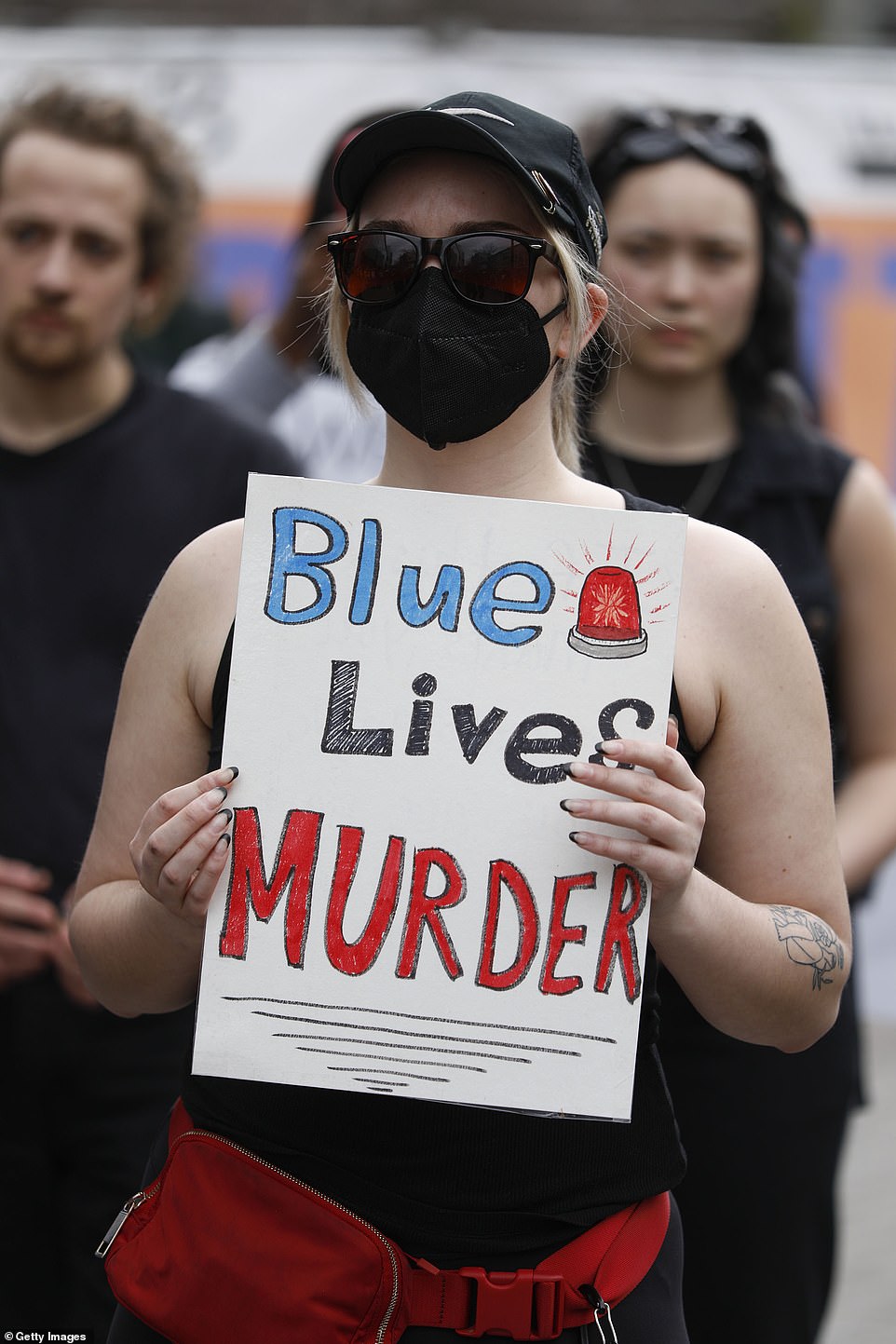 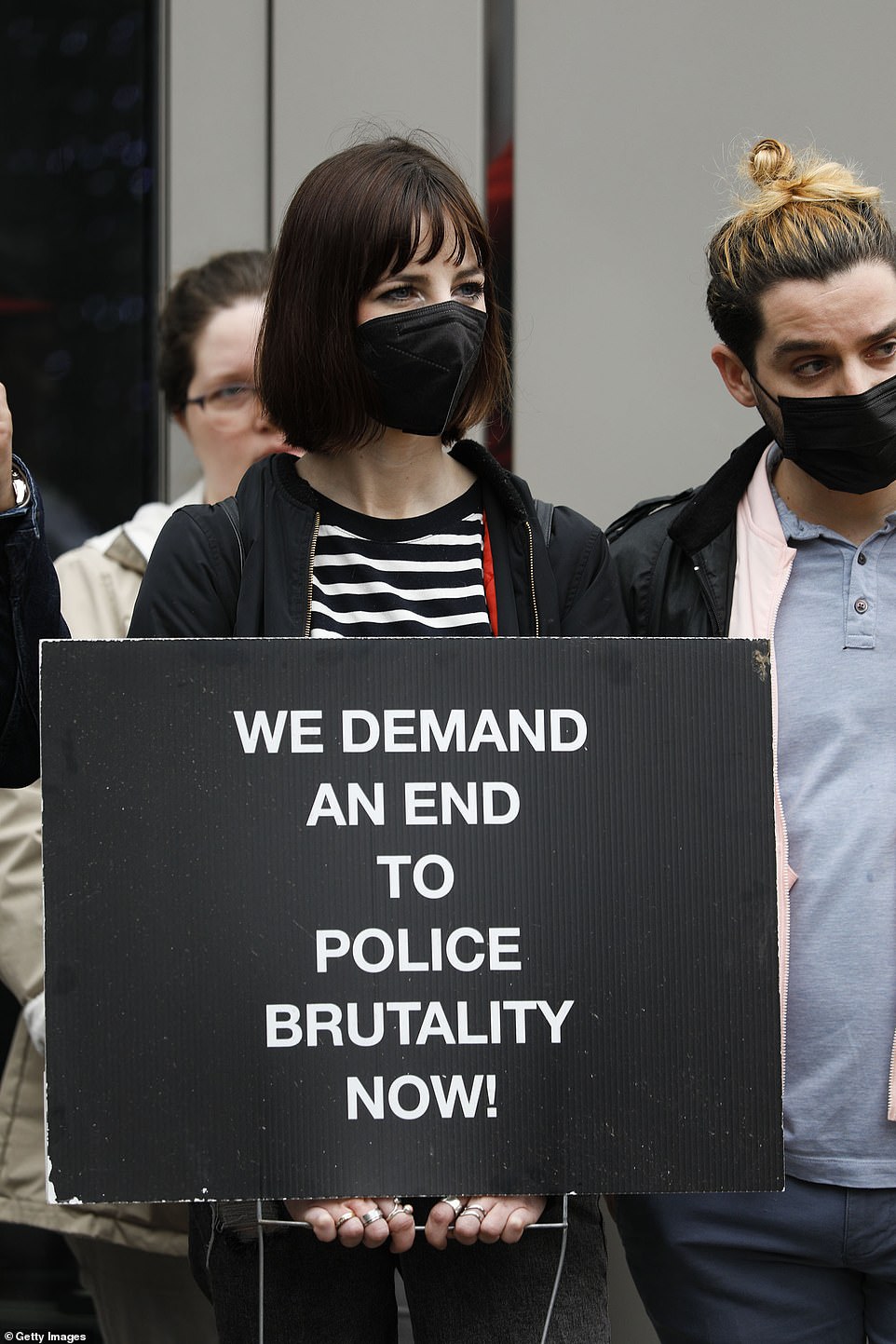 Some businesses cut their hours short Wednesday, closing early. But the demonstration remained non-violent with protesters demanding justice for Lyoya and other Black lives lost in shootings involving police

As in many U.S. cities, Grand Rapids police have been occasionally criticized over the use of force, particularly against Black people, who make up 18 percent of the population.

In November, the Michigan Supreme Court heard arguments in a lawsuit over the practice of photographing and fingerprinting people who were never charged with a crime. Grand Rapids said the policy changed in 2015.

A downtown street has been designated Breonna Taylor Way, named for the Black woman and Grand Rapids native who was killed by police in Louisville, Kentucky, during a botched drug raid in 2020.