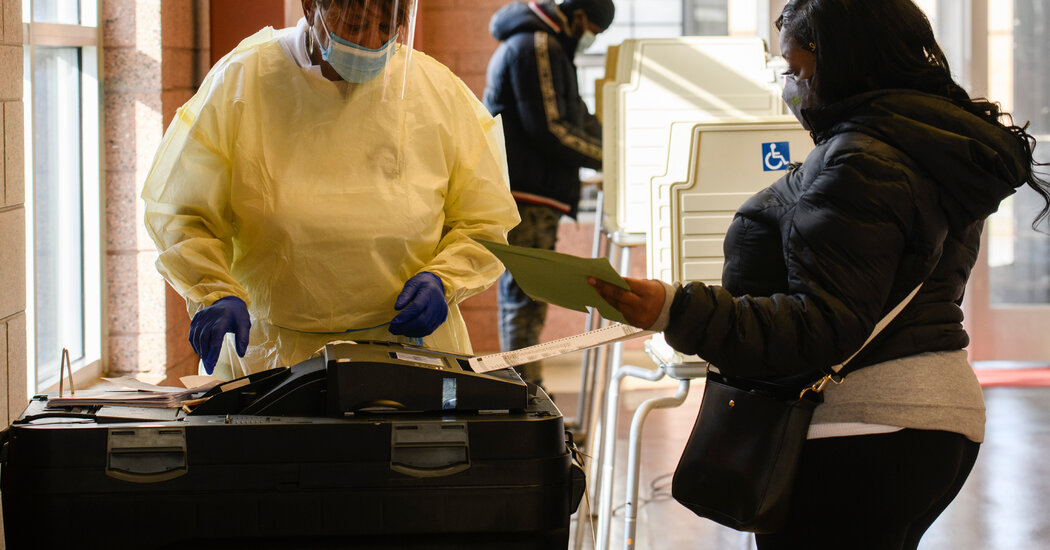 A Michigan state judge on Tuesday dismissed one of the last, high-profile court cases questioning the results of the 2020 presidential election, a case former President Donald J. Trump cited to claim fraud after unofficial results in one county initially assigned some votes for him to President Biden.

The plaintiff, William Bailey, a local resident, and his lawyer, Matthew S. DePerno, had sought to use the case to cast doubt on the vote nationwide, suggesting that a flawed count by Dominion Voting System machines in Antrim County, Mich., meant that all such machines were open to manipulation and deliberate fraud. The suit was also an attempt to force another statewide audit.

Although Mr. DePerno and the various experts he tapped to analyze the vote repeatedly said that various flaws with the voting machines left them open to hacking, they did not cite any specific evidence that it had occurred. A computer expert hired by the state also noted some security weaknesses, but said there was no indication that they had been exploited.

Mr. Trump cited Antrim County in his speech on Jan. 6 in Washington claiming that the vote was corrupt and has continued to site the case as an example of “major” fraud. The critical mistake made by local election officials was readily evident right after the Nov. 3 vote. Unofficial results posted online by the county clerk indicated that Mr. Biden won the heavily Republican country with 7,769 votes versus 4,509 votes for Mr. Trump.

A quick analysis by county and state election officials determined that the mistake was because of human error — a failure to update the software in some voting machines to account for new ballot lines for local issues had thrown the machine count off, with votes for Mr. Trump attributed to Mr. Biden.

Judge Kevin A. Elsenheimer of the 13th Circuit Court, a former Republican legislator in Michigan, granted the motion on Tuesday by the combined state and county legal team for a summary dismissal on fairly narrow technical grounds, saying the legal requirement for voters to request an audit had already been met.

The statewide vote audit demanded by Mr. Bailey and his lawyer had already been completed by Jocelyn Benson, the Michigan secretary of state, earlier in the year, he said. The ruling did not address the issue of possible manipulation.

Ms. Benson had said two audits confirmed the accuracy and integrity of the vote, with a random sample of ballots in the second one mirroring the machine count.

In a statement on Tuesday, Ms. Benson said that the dismissal of the “last of the lawsuits” seeking to further the “big lie” confirmed that the election was fair and secure.

Dana Nessel, the Michigan attorney general, said in a statement that she hoped the ruling would be a “nail in the coffin” for any remaining conspiracy theories surrounding the outcome of the presidential election.

Mr. DePerno did not respond to a telephone call and an email seeking comment, but he is expected to appeal.

The case continues to roil the waters in Antrim County, with public discussion of it taking up many hours of recent county commission meetings. Democrats have generally expressed support for the county’s explanation while Republicans demand the county clerk, a Republican, be dismissed.

County officials have fretted aloud that they would have to replace all the voting machines because a significant number of voters had lost faith in them, and at their last meeting in early May decided to summon their lawyer for a briefing.

“Is everybody OK with just a quick update and not 8,700 questions for four hours?” pleaded Terry VanAlstine, the chairman of the board of commissioners.