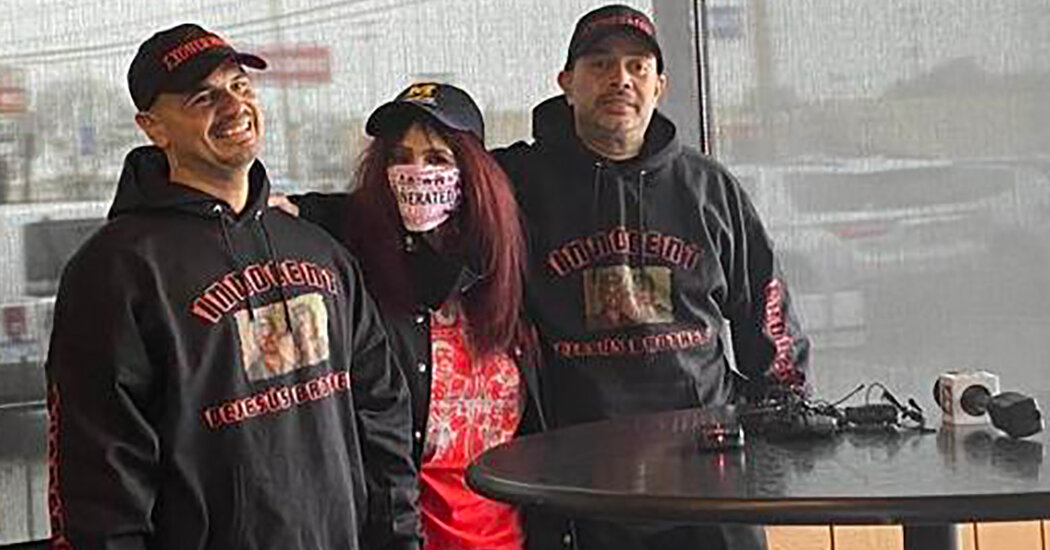 After 25 years in prison, George DeJesus said the realization that he had been freed began to sink in only when he was finally able to change out of his prison uniform and put on his own clothes — including a sweatshirt with a photo of him and his brother beneath the word “innocent.”

“When I took off them blues and started putting on these, every stitch of clothing that I put on, my smile got bigger and bigger,” he said. “That was about the moment — when I put these clothes on, it was real for me.”

Mr. DeJesus, 44, was speaking on Tuesday after a judge freed him and his brother, Melvin DeJesus, 48, overturning their convictions in the 1995 murder of their neighbor Margaret Midkiff, who was found nude in her basement in Pontiac, Mich., with a pillowcase over her head and wires binding her neck, wrists and ankles.

Robyn B. Frankel, director of the Michigan attorney general’s Conviction Integrity Unit, said that an extensive review of evidence in the case showed that Mr. Gohagen had blamed the brothers in exchange for a deal with prosecutors that allowed him to plead guilty to lesser charges and avoid a mandatory life sentence.

“He ended up throwing George and Melvin under the bus and said they actually participated and forced him,” said Lori Montgomery, another prosecutor in the Conviction Integrity Unit, which was created in 2019 and began reviewing the case in 2020. “But in reality, what we found is that he, Brandon Gohagen, did this crime alone.”

Both brothers credited their mother, Elizabeth DeJesus, with helping them keep their fight to be exonerated alive, year after year and decade after decade.

“It was hard because you could lose faith,” George DeJesus said at a news conference where the brothers embraced each other, their parents and other relatives. “But we always fought hard and, just when we felt that momentum going down, my mother made us promise we would never give up — no matter what happens.”

Ms. DeJesus put her arms around her sons and said: “One wrongful conviction is too many. So I got my boys here and I have to thank God for it. We are blessed.”

The brothers were helped by the Cooley Innocence Project at Western Michigan University and the University of Michigan Innocence Clinic, which worked on their cases for years before the Conviction Integrity Unit agreed to review the matter.

Ms. Frankel said the review uncovered that only Mr. Gohagen’s DNA had been found at the crime scene, even on the pillowcase and ligatures that he claimed the brothers had touched.

Witnesses also corroborated the brothers’ alibi that they were at a party on the night when Mr. Gohagen said that they had killed Ms. Midkiff, Ms. Frankel said.

In 2016, the case further unraveled when a DNA search linked Mr. Gohagen to the sexual assault and murder of another woman in Pontiac, Rosalia Brantley, in 1994, about 11 months before Ms. Midkiff was sexually assaulted and killed in a strikingly similar crime, Ms. Frankel said.

Ms. Brantley, whose body was also found nude and bound three miles from Ms. Midkiff’s home, had been stabbed and beaten to death, Ms. Frankel said.

In 2017, Mr. Gohagen, who was serving 35 to 80 years in prison for second-degree murder and first-degree criminal sexual conduct in the killing of Ms. Midkiff, was convicted of murdering and sexually assaulting Ms. Brantley and sentenced to life in prison without parole.

Ms. Frankel said the Conviction Integrity Unit identified 12 other women who were emotionally, physically, and sexually abused by Mr. Gohagen in the 1990s, undercutting his claim that the DeJesus brothers had forced him to sexually assault Ms. Midkiff against his will.

Mr. Gohagen was a “serial rapist” who was “just running rampant in the neighborhood,” Ms. Frankel said.

Dana Nessel, the Michigan attorney general, said the case presented a “particularly tenuous situation” in which the brothers had been convicted primarily based on the testimony of a perpetrator who sexually assaulted the victim.

“That’s a scary set of circumstances to know that a person can spend the rest of their life behind bars with no other evidence than that,” she said. “We really have to be cautious and we really have to be suspect to ensure that people aren’t going to prison on flimsy evidence like this.”

Turning to George DeJesus, Ms. Nessel said: “I am so sorry that this happened to you and to your family. Nobody deserves this. And it’s a total miscarriage of justice.”

Exonerated prisoners in Michigan are eligible for up to a year of housing and two years of other services, such as help finding a job, work clothes and tools, prosecutors said.

The brothers said they planned to hold a family meeting as they began to plan their lives after prison.

“I waited so long for this,” Melvin DeJesus said. “And you know the words that I heard the most? ‘Be patient.’ How long can you be patient? Every year I’ve been patient. Finally, finally, we’re free.”