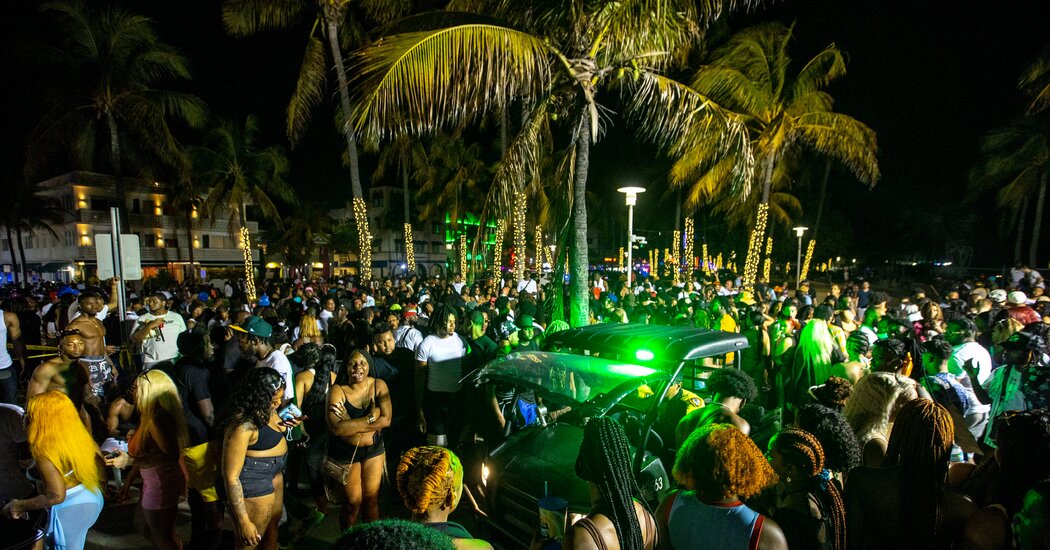 Miami Beach is banning some nighttime alcohol sales in the city’s popular South Beach neighborhood for three straight nights, an emergency measure that went into effect on Thursday — the same day as a curfew intended to quell any spring break mayhem in the same area.

Under the ban, which affects most of the neighborhood, sales of alcohol for “off-premises consumption” are prohibited at such businesses as liquor stores and drugstores after 6 p.m. on Thursday, Friday and Saturday.

The ban does not affect alcohol sales at bars and restaurants, though it coincides with a curfew imposed by the city for the same area from just before midnight on Thursday, Friday, Saturday and Sunday until 6 a.m. the next day.

City officials hope that the emergency measures will dampen spring break chaos and large crowds that have overwhelmed South Beach — and have left five people wounded in two separate shootings last weekend on a busy promenade.

On Monday, city officials announced their intent to establish a curfew. At a Tuesday meeting, the Miami Beach City Commission voted unanimously to put the curfew in effect and added the alcohol sales restrictions. Those were announced in a news release on Wednesday.

“We all knew that this week and next week were going to be hard weekends, because every year, they are hard weekends,” Mayor Dan Gelber said at the Tuesday meeting, adding that the commission had “reached clarity” about how to address this year’s spring break. “Frankly, optimism, hope and luck are not plans.”

People who violate the emergency measures will be subject to arrest, according to a city news release.

“Our objective is compliance,” Ernesto Rodriguez, a spokesman for the Miami Beach Police Department, said on Thursday night.

Ricky Arriola, one of the city commissioners, said the spring break crowd was unlike the visitors who come to the city for seasonal events like Art Basel and Art Deco Weekend and who “don’t behave like this.”

“It’s a particular crowd that comes here particularly this time of year and doesn’t behave with normal civil rules of conduct,” Mr. Arriola said. “They settle differences with fighting, stabbing, shootings and mayhem.” He said that the “draconian” emergency measures, while not ideal, were necessary, despite the effects on businesses.

Rosie Zubigaray, the manager of Gulf Liquors in South Beach, said in an interview on Thursday night that the alcohol sale restrictions were unfair. Restaurants and bars are “selling alcohol until midnight right on the place where the shootings occurred,” she said, contending that the city was holding liquor stores to a different standard.

With Ultra Music Festival in downtown Miami this weekend and continued spring break festivities, she had prepared for a busy weekend by purchasing extra merchandise that she said the store was now stuck with.

At least two lawsuits have been filed against the city pertaining to the curfew, said Matt Kenny, a city spokesman. He said that the city “is preparing our response to these lawsuits,” and declined to comment further on pending litigation.