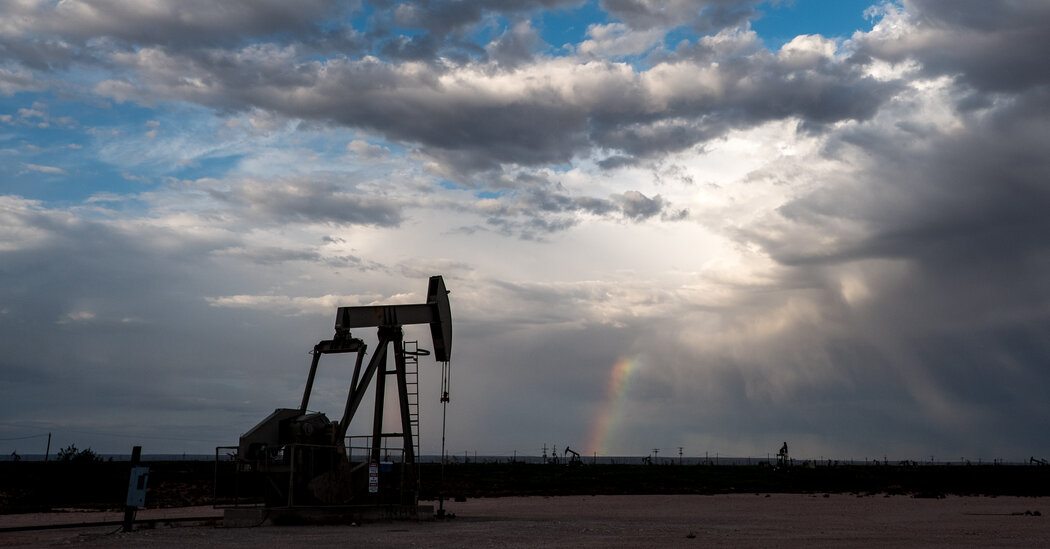 Startlingly large amounts of methane are leaking from wells and pipelines in New Mexico, according to a new analysis of aerial data, suggesting that the oil and gas industry may be contributing more to climate change than was previously known.

The study, by researchers at Stanford University, estimates that oil and gas operations in New Mexico’s Permian Basin are releasing 194 metric tons per hour of methane, a planet-warming gas many times more potent than carbon dioxide. That is more than six times as much as the latest estimate from the Environmental Protection Agency.

The number came as a surprise to Yuanlei Chen and Evan Sherwin, the lead authors of the study, which was published Wednesday in the journal Environmental Science & Technology.

“We spent really the past more than two years going backwards and forwards thinking of ways that we might be wrong and talking with other experts in the methane community,” said Dr. Sherwin, a postdoctoral research fellow in energy resources engineering at Stanford. “And at the end of that process, we realized that this was our best estimate of methane emissions in this region and this time, and we had to publish it.”

He and Ms. Chen, a Ph.D. student in energy resources engineering, said they believed their results showed the necessity of surveying a large number of sites in order to accurately measure the environmental impact of oil and gas production.

The largest previous assessment of methane emissions from oil and gas in the United States, published in 2018, reviewed studies covering about 1,000 well sites, a tiny fraction of the more than one million active wells in the country. The new study, by contrast, used aerial data to examine nearly 27,000 sites from above: more than 90 percent of all wells in the New Mexico portion of the Permian Basin, which also extends into Texas.

The researchers also took measurements from each site on multiple occasions to account for the fact that operations, and therefore emissions, vary over time. Methane can be released by wells both on purpose, in a process known as venting, and through unintentional leaks from aging or faulty equipment.

Robert Howarth, a professor of ecology and environmental biology at Cornell University who was not involved in the study, called it “very carefully done.” Dr. Howarth has long argued that the E.P.A. substantially underestimates the methane problem. The new study calculated methane emissions at 9.4 percent of gross gas production, which dwarfs the Environmental Protection Agency’s 1.4 percent estimate.

Natural gas accounts for about a third of American energy consumption, and because it is less costly than coal in terms of carbon dioxide emissions, many policymakers have promoted it as a “bridge” that could do less damage to the climate while society works on a longer-term transition to renewable energy. But compared to coal, natural gas results in much higher emissions of methane, which is a more potent greenhouse gas than carbon dioxide, but doesn’t last as long in the atmosphere.

Ramón Alvarez, an atmospheric chemist at the Environmental Defense Fund, estimated about a decade ago that the break-even point — the point above which natural gas would actually hurt the climate more than coal — was a 3.1 percent methane leakage rate. Based on more recent data from the Intergovernmental Panel on Climate Change, Dr. Howarth estimates that the threshold is closer to 2.8 or 2.9 percent.

That makes the 9.4 percent leakage rate in the new study highly alarming, experts said, though they emphasized that the rate in the Permian Basin might not be comparable to rates elsewhere.

“If this result is similar in other basins — which we don’t know if it is — that would eliminate the greenhouse gas emission savings of the coal-to-gas transition,” said Amy Townsend-Small, an associate professor of environmental science at the University of Cincinnati.

If there was good news in the study, it was that a small number of oil and gas sites contributed disproportionately to emissions — suggesting that, if the worst offenders change their practices, it is possible for the industry to operate more cleanly.

A rule finalized last year by the New Mexico Oil Conservation Commission bans regular venting and flaring, referring to the practice of releasing or burning off natural gas rather than containing it. Another regulation being considered by the state’s Environmental Improvement Board would require more frequent inspections and repairs of oil and gas infrastructure. (That measure is designed to reduce emissions of volatile organic compounds, a group of chemicals that can have adverse health effects, but oil and gas sites that leak V.O.C.s tend to also leak methane.)

The Stanford researchers emphasized that the same methodology they used to quantify methane emissions could be used to identify problem sites and target regulations accordingly.