Meet the National Parks’ ‘Ranger of the Lost Art’ 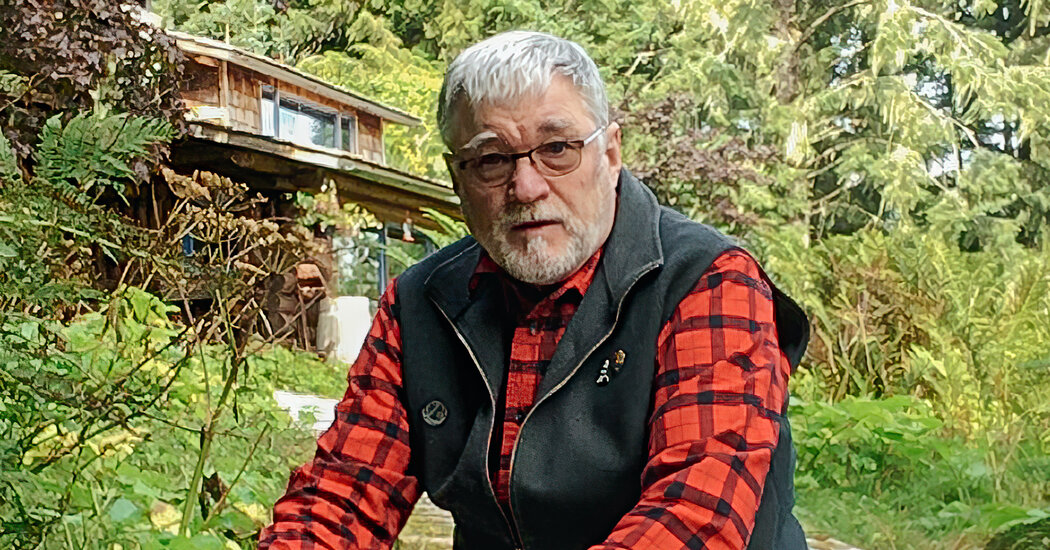 Hundreds of thousands of sweaty, athleisure-clad national park visitors have entered the park gift shop after a hike and immediately gravitated toward one particular display: the vintage-looking magnets, postcards and posters with the park’s name in blocky lettering, its best-known vista or features rendered in simple contours and pastels.

The style, which has become shorthand for old-school travel posters, can be traced back to one series of 14 posters, created for 13 parks and monuments in the 1930s and ’40s by Works Progress Administration artists. But those original designs were almost completely lost to time and neglect.

Most of the credit for their survival lies with a bespectacled, retired backcountry dentist named Doug Leen who homesteads on an island in southeast Alaska. (“I should probably get going, my tide’s just about in,” he said at the end of one interview, hanging up to pilot his boat into town for some errands.)

Mr. Leen, 74, has made it his life’s work to track down as many of the original W.P.A. national park posters as he can, after they were scattered across the country for 70 years with few records.

He also reproduces original 1930s posters and nods to the W.P.A. aesthetic in 32 contemporary designs. Turn over a W.P.A.-style postcard sold at a national park, and it almost certainly bears the logo of his company, Ranger Doug’s Enterprises.

After the Great Depression, the New Deal’s W.P.A. employed Americans in a variety of public works. That included the Federal Art Project, which patronized upward of 10,000 artists from 1935 to 1943, among them Diego Rivera, the muralist, and Selma Burke, the sculptor. About a third were considered practical artists, fulfilling orders for stage sets or posters about shows (“8 Roof Garden Concerts at Jamaica YMCA”) and venereal diseases (“Public Enemy No. 1: Syphilis”).

These artists had less than romantic views of their work, making about $23 per hour and juggling multiple projects, much like the freelancers of today. They worked quickly and often in media unrelated to what would now be called their “skill set.”

“You’ll read interviews with former W.P.A. workers and they’re, like, ‘I had a background in painting pictures on fine china,’” said Tracy Baetz, the chief curator of the U.S. Department of the Interior Museum. “Great. You’re an artist. Come help us out.”

Many of the posters reveal a playful sensibility and global influences such as Bauhaus design from Germany and drawing styles from Mexican murals. None of these visual techniques were new or uniquely American, but they’ve stuck in the way things do with time and repetition. The posters were treated as advertising, screenprinted into hundreds of copies and eventually into the American imagination.

“These were handmade, artistic representations of graphic design in our country, but nobody knew that at the time,” said Ennis Carter, a curator and the author of “Posters for the People: Art of the WPA.”

The National Park Service was 19 years old when the Federal Art Project started, and visitation numbers were much lower than they are now. After the Depression and with a crude highway system, Americans were unlikely to go out of their way to public lands. So the F.A.P. offered ways to advertise the parks and provide visitors with educational materials showing their value.

Thirteen N.P.S. sites, including Zion, Yosemite and the Grand Canyon, ordered posters from a catalog sent out by the Western Museum Laboratories, a work space for several W.P.A.-funded projects, and got at least 100 copies apiece. A white box appears on many of the prints, where employees could post notices about offerings like guided hikes.

“It was never intended to be valuable in 80 years,” said Nancy Russell, the archivist for the National Park Service History Collection. “It was intended to be stuck up on the bulletin board. They got rained on, messed up and tossed out.”

Of the 35,000 posters created during the W.P.A., only about 2,000 have been found and cataloged, and just a fraction of those are national park prints.

In 1970, Mr. Leen was a ranger at Grand Teton National Park’s Jenny Lake Ranger Station, adding to the burn pile at a horse barn during the annual all-hands cleanup day. He spotted a poster on the wall: “Meet the Ranger Naturalist at Jenny Lake Museum,” it read over a blue-tinted scene of Cascade Canyon. “It was so well done,” Mr. Leen said. “It had this old luster to it.”

He drove the poster home in the front seat of his pickup and hung it up. He didn’t think much about it as he worked six more years as a ranger and then moved to Alaska to start his dentistry practice, piloting to backcountry patients on an 1899 tugboat he renovated and doing a stint in Antarctica as McMurdo Station’s resident dentist.

Then, in 1992, the bookstore manager at Grand Teton asked Mr. Leen if he had any ideas for a poster commemorating Jenny Lake Museum. He did — it was still hanging on his wall.

Mr. Leen consulted the artist Mike Dupille to reproduce the Jenny Lake poster; he recognized its value as an old silkscreen (“It’s kind of a rare art form,” Mr. Leen recalled the artist saying). The W.P.A. posters were the first example of mass producing posters using the technique. It was a painstaking process of extruding inks through cloth one color layer at a time, but the resulting vibrancy was a stark contrast to the usual hand-drawn posters.

Curious if other parks had similar prints, Mr. Leen called Tom DuRant, then an archivist at the N.P.S. Harpers Ferry Center. That day, Mr. DuRant had happened upon an old set of black-and-white negatives showing crude photographs of 13 of the 14 W.P.A. national park poster designs in the original series. Among them was one for Grand Teton. “He held it up to the light and read, ‘Meet the Ranger Naturalist at Jenny Lake Museum,’” Mr. Leen remembered.

Realizing that the poster on his wall was an original copy from a historic series, he flew to Washington, D.C., and drove to Harpers Ferry. “Got a speeding ticket on the way, I was so excited.”

Calling himself the Ranger of the Lost Art, Mr. Leen started his company soon after, slowly recreating each of the original designs right down to the silk-screen process. In 2001, he hired Brian Maebius, an illustrator, to make W.P.A.-style posters for parks that never got one. They were so faithful to the W.P.A. hallmarks — limited color palette, a matching font that Mr. Maebius designed — that the company had to quash knockoffs.

“Part of that, in fairness, was people thought they were original posters and therefore copyright-free to use,” Mr. Maebius said.

Mr. Leen also started looking for the estimated 1,400 original national park poster copies that existed by the F.A.P.’s end in 1943. He urged park employees to search the dusty corners of their offices; one poster was discovered being used in a plant press, and others had been cut up to use as file dividers. Strangers whose relatives worked for the National Park Service found W.P.A. posters in attics or basements. One man found nine originals at a secondhand store in Los Angeles. They all called Mr. Leen because they’d heard that he would likely know if they’d found something interesting.

Mr. Leen didn’t have to become the go-to national park posters guy — their appeal would probably have been obvious to anyone who’d stumbled upon one — but it’s hard to imagine anyone being quite as committed to their preservation. “It’s a classic case of right person, right place, right time,” Ms. Baetz said.

A bit like Forrest Gump, Mr. Leen has an uncanny way of running into historically significant people and objects. (“I passed Norman Rockwell, who was sketching Jenny Lake on the front porch of my ranger station, in 1973 or so,” he noted during an interview. “Didn’t recognize him.”)

He’s also tenacious about understanding history. “It’s up to you to turn over the stones that don’t often get turned over,” he said. “I’ve been very fortunate, but maybe it takes a bit of brass to knock on Edmund Hillary’s door.” Which he has, in fact, done.

What Prints Can Do for the Parks

Searching up the W.P.A. posters, many of which only survived because they scattered to hidden corners and private hands, requires particular doggedness.

“They did wonderful artwork, but they kept lousy records,” Mr. Leen said. It’s even unclear who made the posters; since they belonged to the government, artists usually didn’t sign the pieces. Those who’ve studied the national park silk-screens think that a W.P.A. artist named Chester Don Powell designed at least a handful and oversaw the production of the rest. He spent much of his life after the W.P.A. as a draftsman at shipyards and an architectural designer, gaining neither recognition nor profit from the park prints.

As the W.P.A. style became more popular, people realized the prints’ monetary worth. Mr. Leen has traced several prints through auction blocks, sometimes bidding on them, other times seeking private collectors afterward to see if they’d donate the poster back to the N.P.S. He and officials from the Library of Congress rarely have funds to compete at auction anymore: Recently a Grand Canyon poster went to a private collector through Swann Galleries for $9,000, and Mr. Leen has had other posters appraised at up to $20,000.

Of the 14 original prints, there are two Mr. Leen still hasn’t found: Great Smoky Mountain and Wind Cave National Parks. (He’s offering a $10,000 reward for either.) He knows what they look like thanks to the negatives Mr. DuRant provided, but fills in the colors with his own guesses. The creator often took whimsical liberties with the palette, washing the Grand Canyon in cotton candy pink and Yellowstone’s Old Faithful geyser in vibrant orange against a teal sky.

Ranger Doug posters sell for $45 at park shops and his website; most of the profits go to the park depicted. Mr. Leen believes his posters can help the national parks, many of which have been underfunded in recent years. “Bookstores are more and more being forced to be productive. There’s no reason why they can’t be.” He believes parks would do well to sell more high-quality, mid-price souvenirs — like his prints, or Swiss Army knives — rather than cheap key chains.

As in the W.P.A. era, many Americans are struggling financially and might not be willing to travel multiple states away to visit a national park because of the coronavirus. The posters conjure survival of harder times for better ones, and encourage would-be visitors to financially support parks from afar.

Mr. Leen, now retired from dentistry, will wait out the pandemic while working on a book about the posters. He now knows of 42 copies of original parks posters, 11 of which have been returned to the Library of Congress, the N.P.S. and the Department of the Interior Museum.

He continues to make and advise on posters for new parks. “When he’s making new posters, he’s not doing it isolated from educating people about what he is referencing,” Ms. Carter said. “And that’s cool. That’s keeping something alive.”

Mr. Leen hopes someone might read this article and call him about that Wind Cave poster in their attic. “What’s driving me in this whole thing is to get all 14 of these back in the public domain,” he said. “These belong to the American people, pure and simple.”