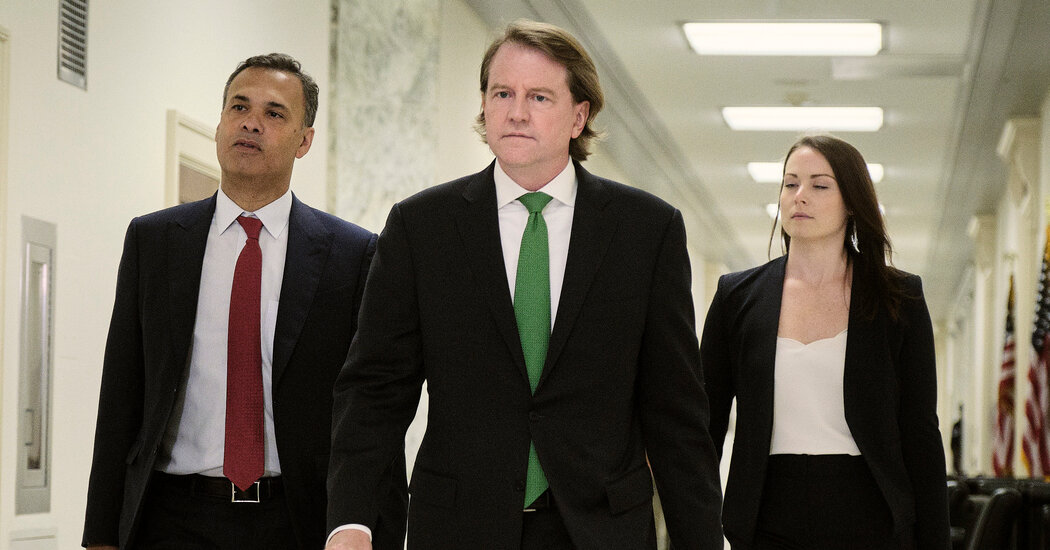 The fact that Mr. McGahn is talking to Congress at all is significant after a multiyear legal battle by the Trump Justice Department to block a subpoena for his testimony. That dispute ended last month when the Biden Justice Department, House Democrats and a lawyer for Mr. McGahn reached a compromise.

“I believe we have been vindicated in terms of the intimacy of his involvement and the ultimate conclusions of the Mueller report,” Representative Sheila Jackson Lee, Democrat of Texas, told reporters as she exited the session. “The Congress has to be respected with its subpoena and oversight responsibilities.”

She added: “Today we asserted that right.”

But Mr. McGahn’s appearance may yield little in terms of new revelations. He testified behind closed doors and will have up to a week to review a transcript for accuracy before it is made public. He also may be questioned only about his involvement in matters that are described in the publicly available portions of the report by the special counsel, Robert S. Mueller III.

Still, Mr. McGahn was expected to be asked to respond under oath to Mr. Trump’s public denial of events that were described in the report based in part on what Mr. McGahn told Mr. Mueller’s investigators, including that Mr. Trump had ordered him to have Mr. Mueller fired — a step Mr. McGahn said he refused to take.

People familiar with his ongoing testimony said on Friday that the former top White House lawyer was hewing closely to the account he had already given the special counsel, often telling committee lawyers that his recollections of four-year-old events were no longer sharp. In the first several hours, at least, Mr. McGahn had not broken significant new ground, according to the people, who requested anonymity to describe the nonpublic testimony.

“He’s being somewhat difficult,” Representative Jerrold Nadler, Democrat of New York and the Judiciary Committee chairman, said during a break midway through the session, though he added that Mr. McGahn was not being altogether uncooperative.

Republicans were pleased to declare the interview a waste of time as they left the session after more than five hours of questioning.

Congress is out of session this week, and members must be physically present to participate, so the full committee was not expected to attend. While those who did had the right to ask questions, Mr. McGahn was questioned primarily by committee lawyers. He was accompanied by his lawyer, William A. Burck.

“My attitude was better late than never,” said Representative Jamie Raskin, Democrat of Maryland, though he conceded that the scuffle over Mr. McGahn’s testimony had not left the House with everything it wanted.

“It doesn’t end up with the ringing affirmation of Congress’s Article I power to get the information it wants,” Mr. Raskin said in an interview. “This makes clear Congress is going to have to fight to protect its investigative power.”