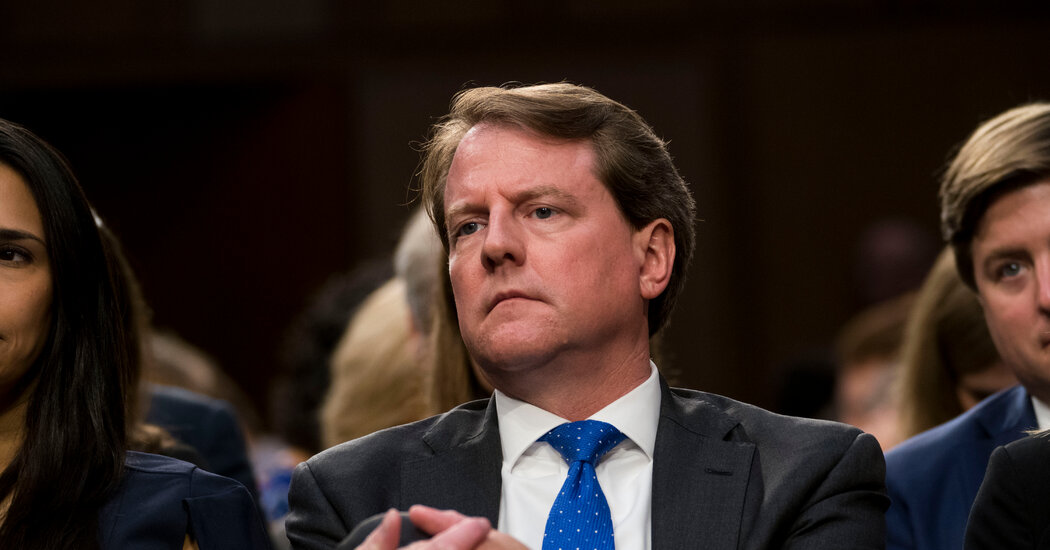 Lawyers for House Democrats, the Justice Department and Mr. McGahn had tentatively struck a deal to provide the testimony earlier in May. But the scheduling was delayed for weeks while they waited to see what Mr. Trump, who was not a party to the agreement, would do.

Mr. McGahn’s agreement to testify — with President Biden’s permission — was contingent upon there being no active legal challenge to his participation in the matter, according to the two people, who spoke on the condition of anonymity because of the legal and political sensitivity of the matter.

Immediately after the deal was announced this month in a court filing, a lawyer for Mr. Trump had conveyed that the former president intended to intervene. Former presidents can invoke executive privilege, although courts weigh that against the view of the incumbent president, and Mr. Trump could have sought a court order blocking Mr. McGahn’s testimony.

But late last week, the people said, the lawyer for Mr. Trump — Patrick Philbin, a former deputy White House counsel in the Trump administration who is continuing to help handle his post-presidential legal affairs — said that Mr. Trump would not be intervening after all.

Mr. Philbin, who did not respond to a request for comment, is said to have provided no reason for the about-face.

While he was president, Mr. Trump vowed to stonewall “all” congressional subpoenas, and taxpayer-funded lawyers with the Justice Department fought lengthy court battles and appeals that succeeded in running out the clock on the possibility that House Democrats would obtain the information they were seeking before the 2020 election.

Now that Mr. Trump is no longer president, however, there is at least one major difference: To keep litigating over the matter, Mr. Trump would have to pay the legal costs himself.

The McGahn case stems from the House Judiciary Committee’s desire in 2019 to question him about matters related to his role as a key witness in the report by the special counsel, Robert S. Mueller III, about efforts by Mr. Trump to impede the Russia investigation.

But after the panel subpoenaed Mr. McGahn to testify, he refused to appear, on Mr. Trump’s instructions. The committee sued, and the case went through several rounds of legal fights over various constitutional issues that lacked definitive precedents because previous such disputes had generally been resolved with a negotiated compromise.

Currently, the case is pending before the Court of Appeals for the full District of Columbia Circuit on the question of whether Congress has a “cause of action” that permits it to sue the executive branch. Under presidents of both parties, the executive branch has argued that Congress does not, and the Biden Justice Department had signaled that it was prepared to keep arguing that position if no accommodation could be reached.

The deal averts the uncertain outcome of further such litigation — but also means that the next time a fight emerges over a subpoena from the House to the executive branch, the Justice Department will be able to start fresh in prolonged litigation over that unresolved issue.

Under the deal, according to a court filing, there will be strict limits on the testimony Mr. McGahn will provide. He will testify behind closed doors for a transcribed interview, rather than in public.

Only lawmakers on the House Judiciary Committee may attend. And they may ask Mr. McGahn only about information attributed to him, or events involving him, in the publicly available portions of the Mueller report.

The deal also says that the parties will get up to seven days to review the transcript for accuracy before it is made public, suggesting that it would be disclosed sometime in the second week of June.