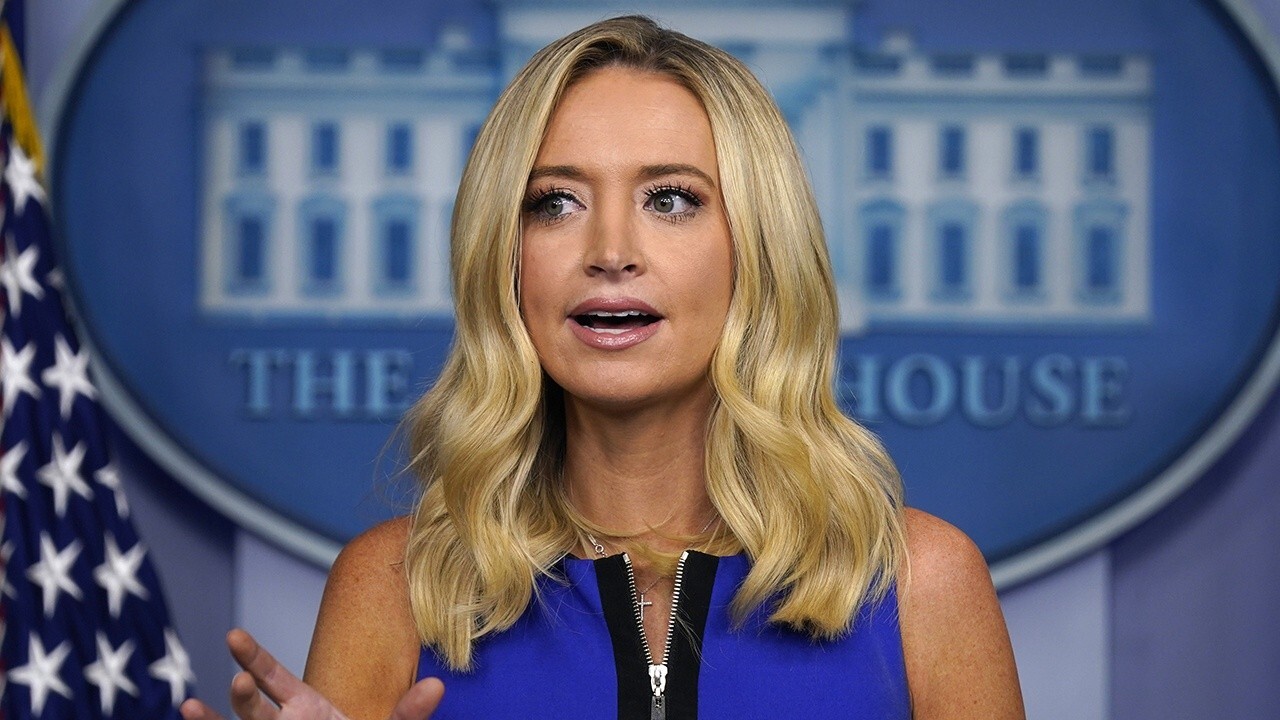 White House Press Secretary Kayleigh McEnany played footage of House Speaker Nancy Pelosi in the shuttered San Francisco salon on loop Thursday, as she said the House speaker “ought to apologize” to Americans.

“Nancy Pelosi was not in the halls of Congress when I asked where she was, she was not working in good faith to make a deal for the American people,” McEnany said during a White House briefing. “Nope, Nancy Pelosi was found in San Francisco, at a hair salon, where she was indoors, even though salons in California are only open for outdoor service.”

Salons in San Francisco have been closed since March and could reopen only for outdoor hairstyling services on Sept. 1.

PELOSI FIGHTS BACK: ‘THE SALON OWES ME AN APOLOGY FOR SETTING ME UP’

“Apparently, the rules do not apply to Speaker Nancy Pelosi; she wants small businesses to stay shut down, but only reopened for her convenience” the press secretary continued. “Do as I say, not as I do, says Nancy Pelosi.”

She added that the California Democrat was “holding up” $1.3 trillion in coronavirus relief for Americans.

“Before she skipped town to violate her state’s health guidelines, Pelosi proposed a bill,” McEnany said. She noted that the HEROES Act, the House’s coronavirus relief proposal, did not contain any additional funding for the Paycheck Protection Program, “funding that would help the very small business she has bizarrely accused of plotting against her.

In May, the House passed the HEROES Act, with a pricetag of $3 trillion, and the Senate proposed the HEALS act, coronavirus relief that would cost $1 trillion.

Congress could not come to an agreement between the two packages and further coronavirus relief still hangs in limbo. Pelosi said that Democrats were willing to compromise at $2 trillion for the fourth coronavirus stimulus package, but that the Trump administration rejected their offer. She said coronavirus relief talks would not resume until the Republicans agreed to offer $2 trillion.

A defiant Pelosi on Wednesday claimed she was “set up” and that a hair salon in San Francisco “owes” her an “apology” after it was revealed the California Democrat visited the business despite local ordinances keeping salons closed amid the coronavirus pandemic.

Pelosi added she has been to the salon “over the years many times.”

“I take responsibility for trusting the word of the neighborhood salon that I have been to many times,” Pelosi told reporters Wednesday. “When they said they could accommodate people one at a time, and we can set up that time, I trusted that.”

She added: “As it turns out, it was a setup. So I take responsibility for falling for a setup.”

“The salon owes me an apology for setting me up,” she added.

Pelosi, on Wednesday, downplayed the fact that she didn’t wear a mask in the salon.

“I just had my hair washed. I don’t wear my mask when I’m washing my hair,” she said. “Do you wear one when you wash your hair?”

““It was a slap in the face that she went in, you know, that she feels that she can just go and get her stuff done while no one else can go in, and I can’t work,” Kious told Fox News, adding that she “can’t believe” the speaker didn’t have a mask on. (From the footage, it appears Pelosi had some kind of covering around her neck.)

“We’re supposed to look up to this woman, right?” Kious said. “It is just disturbing.”

Kious said Pelosi received a wash and a blow-dry, but told Fox News that “you’re not supposed to blow dry hair,” according to coronavirus safety precautions for hair salons.

“We have been shut down for so long, not just me, but most of the small businesses and I just can’t – it’s a feeling – a feeling of being deflated, helpless and honestly beaten down,” Kious said.

“I have been fighting for six months for a business that took me 12 years to build to reopen,” she explained. “I am a single mom, I have two small children, and I have no income.”

Meanwhile, President Trump weighed in, blasting the speaker for “constantly lecturing everyone else” on COVID-19 guidelines.

“Crazy Nancy Pelosi is being decimated for having a beauty parlor opened, when all others are closed, and for not wearing a Mask–despite constantly lecturing everyone else,” the president tweeted Wednesday. “We will almost certainly take back the House, and send Nancy packing!”