McConnell asks Republican senators to ‘keep your powder dry’ on the timing of a vote. 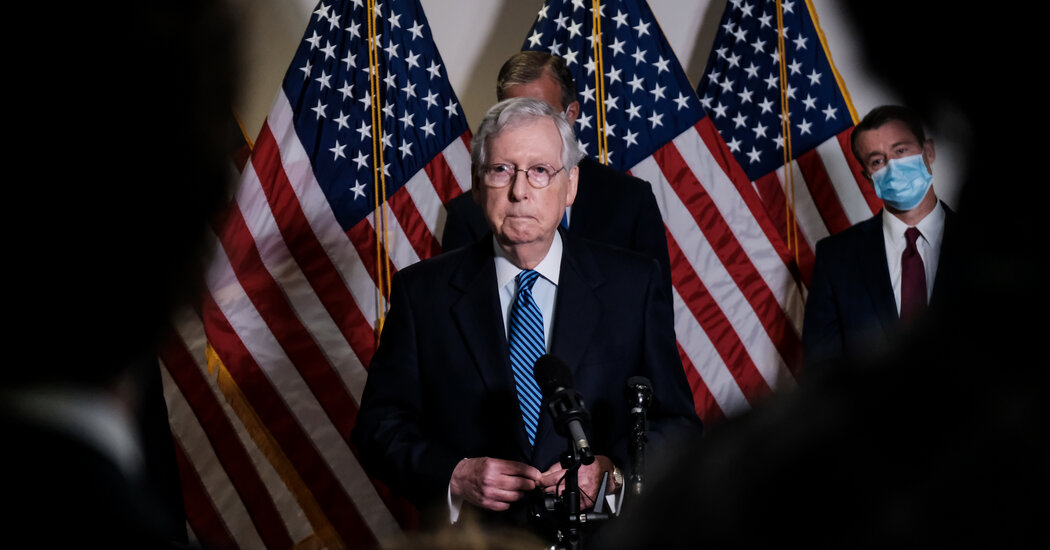 Senator Mitch McConnell implored fellow Republican senators on Friday night to “keep your powder dry” in an effort to stave off defections, as he weighed whether to force a vote on a possible replacement for Justice Ruth Bader Ginsburg before the Nov. 3 presidential election.

In a “Dear Colleagues” letter, Mr. McConnell, the majority leader, who is from Kentucky, said that senators should not take firm positions until he has a chance to meet with them when they return to Washington. With at least two members of his caucus already indicating in recent days that they would not support confirming a nominee so soon before the election, Mr. McConnell cannot afford to lose more than one other senator.

“Over the coming days, we are all going to come under tremendous pressure from the press to announce how we will handle the coming nomination,” Mr. McConnell wrote. “For those of you who are unsure how to answer, or for those inclined to oppose giving a nominee a vote, I urge you all to keep your powder dry.” He urged them not to “lock yourselves into a position you may later regret.”

Senators Susan Collins of Maine and Lisa Murkowski of Alaska have already said they did not favor voting on a nomination by President Trump so soon before the election. Several other senators, including Lindsey Graham of South Carolina and Charles E. Grassley of Iowa, indicated in recent years that they would not support filling a Supreme Court vacancy during a presidential election, but they did not reiterate that position on Friday after Justice Ginsburg’s death.

With a 53-vote majority and Vice President Mike Pence available to break ties, Mr. McConnell can afford to lose only three members if Democrats remain united against confirming a Trump nominee before the election.

Mr. McConnell blocked President Barack Obama from filling a vacancy that occurred in February 2016, nearly nine months before that year’s election, arguing that the selection should go to whomever the voters picked as the next president. In his letter on Friday night, Mr. McConnell argued that that did not set a precedent for this year, because this time the president and the Senate majority are from the same party.

He also dismissed the emerging argument that there was not enough time to confirm a nominee before the election, noting that Justice Ginsburg herself had been confirmed 50 days after her nomination.