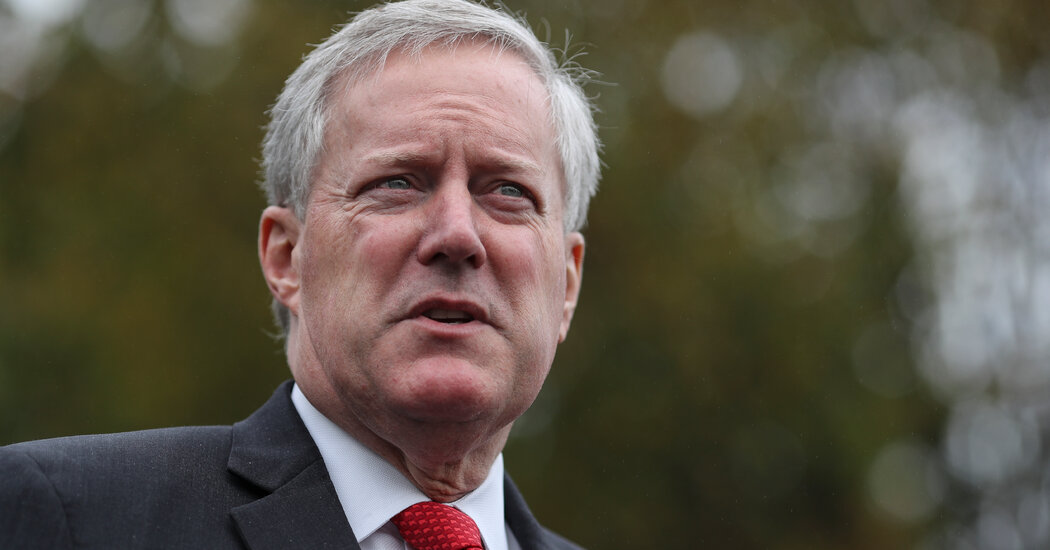 “Anytime you move, you’ll change your driver’s license, but you don’t call up and say, ‘Hey, by the way, I’m re-registering,’” Mr. Meadows said.

Voters are not required to notify a state’s election officials about a move. Mr. Meadows, in fact, is currently registered in both North Carolina and Virginia.

Virginia voter registration forms obtained by The New York Times show that nearly a year after registering at the mountain mobile home, on Sept. 13 and Sept. 15, 2021, Mr. Meadows and Ms. Meadows registered to vote at a condominium in the Old Town neighborhood of suburban Alexandria, Va. Property records show that Mr. and Ms. Meadows purchased the unit in July 2017.

Both Mr. Meadows and Ms. Meadows voted early in person in Virginia’s heated election for governor in 2021, Virginia election records show. In that contest, Glenn Youngkin became the first Republican elected governor of Virginia in 12 years.

In the weeks after the 2020 election, Mr. Meadows served as a revolving door between Mr. Trump and an array of lawyers, supporters and conspiracy theorists who aimed to overturn the election results to keep Mr. Trump in the White House. He introduced Mr. Trump to Mark Martin, a former North Carolina Supreme Court justice who told the then-president, falsely, that Vice President Mike Pence could stop the congressional certification of the Electoral College results.

In January 2021, Mr. Meadows facilitated the call between Mr. Trump and Brad Raffensperger, the Georgia secretary of state, in which Mr. Trump asked Mr. Raffensperger to “to find 11,780 votes” to overturn President Biden’s victory in the state.

During Mr. Trump’s presidency, several members of his White House inner circle, including Jared Kushner, his son-in-law, and Steve Bannon, an on-again-off-again adviser, were registered to vote in two states. There was no evidence that any of them voted twice in the same election.