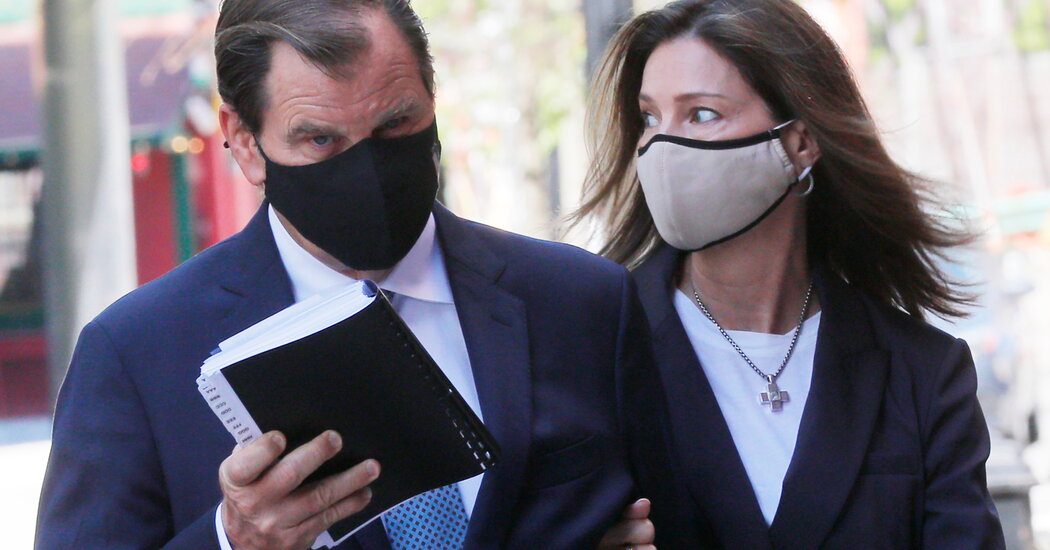 A private equity executive accused of paying $40,000 to have someone secretly correct his daughter’s ACT exam answers was sentenced Thursday to two months in prison, the latest term handed down in the nationwide college admissions scandal that embroiled a handful of wealthy parents, including Hollywood actresses and business executives.

The executive, Mark Hauser, was sentenced after he had pleaded guilty last September to one count of conspiracy to commit mail fraud and honest services mail fraud.

Mr. Hauser’s sentencing is the latest in a string of convictions in the sweeping college admissions scandal, the largest prosecution of its kind in Justice Department history.

Known by investigators as Operation Varsity Blues, the case became publicly known in 2019, when charges were filed against celebrities, actors, financiers and others accused in the scheme. In the past two years, a series of figures have been found guilty for their roles in conspiring to cheat on exams or bribe athletic coaches to get their children into choice colleges and universities.

The central figure in the scandal was William Singer, sometimes known as Rick Singer, who owned a for-profit business named Edge College & Career Network, also known as The Key. The company offered college counseling and preparation, giving wealthy families help in getting their children into competitive colleges and universities.

Mr. Singer, who pleaded guilty in 2019 to charges including racketeering conspiracy and money laundering, told the authorities he was selling a “side door” into prestigious schools for wealthy families.

“If I can make the comparison, there is a front door of getting in, where a student just does it on their own,” Mr. Singer said in one court appearance. “And then there’s a back door, where people go to institutional advancement and make large donations, but they’re not guaranteed in. And then I created a side door that guaranteed families to get in. So that was what made it very attractive to so many families, is I created a guarantee.”

Mark Riddell, a testing expert who frequently posed as a test proctor and took ACT and SAT exams for students, was also an integral part of the scandal.

Among the famous people involved in the case were the “Full House” actress Lori Loughlin and her husband, the fashion designer Mossimo Giannulli. Lawyers for Ms. Loughlin and Mr. Giannulli said during a sentencing hearing in August that Mr. Hauser, who was chair of the board at their children’s school, referred them to Mr. Singer as a college counselor who could help their two daughters and guide them through the admissions process, according to court records.

Prosecutors said the couple later paid $500,000 to have their children admitted to the University of Southern California.

Ms. Loughlin, who with her husband pleaded guilty, served a two-month sentence for her role in the scandal and conspiring to get her daughters into the University of Southern California, having them pose as rowers. She was released from prison in December 2020. Mr. Giannulli, who prosecutors said played a more active role in the scheme, was sentenced to five months in prison.

According to court records and allegations made by federal prosecutors, Mr. Hauser agreed in 2016 to pay Mr. Singer $40,000 to have Mr. Riddell pose as a proctor during his daughter’s ACT exam and to secretly correct her test answers.

Mr. Hauser’s daughter was also allotted extra time to take her exam, and her exam site was moved from her high school in Los Angeles to a testing center in Houston. Mr. Riddell earned a score of 31 out of 36 on the ACT for Mr. Hauser’s daughter, according to court records. That score was then submitted as a part of her applications to colleges and universities.

In a defense memorandum, Mr. Hauser’s lawyers argued that because Mr. Singer had provided “legitimate tutoring and college counseling” to Mr. Hauser’s three older children, Mr. Hauser sought help for his youngest child, whose academic performance had suffered because of medical issues. According to the memo, Mr. Singer’s schemes were unknown to Mr. Hauser.

“Although Mr. Hauser participated in the plan, he in no way was its prime mover or mastermind,” Mr. Hauser’s lawyers wrote. “That role fell to William ‘Rick’ Singer.”

In court documents, prosecutors said Mr. Hauser “was more actively involved in the scheme than some” but also “less culpable than others who engaged in the scheme repeatedly, or who allowed their children to become complicit in it.”