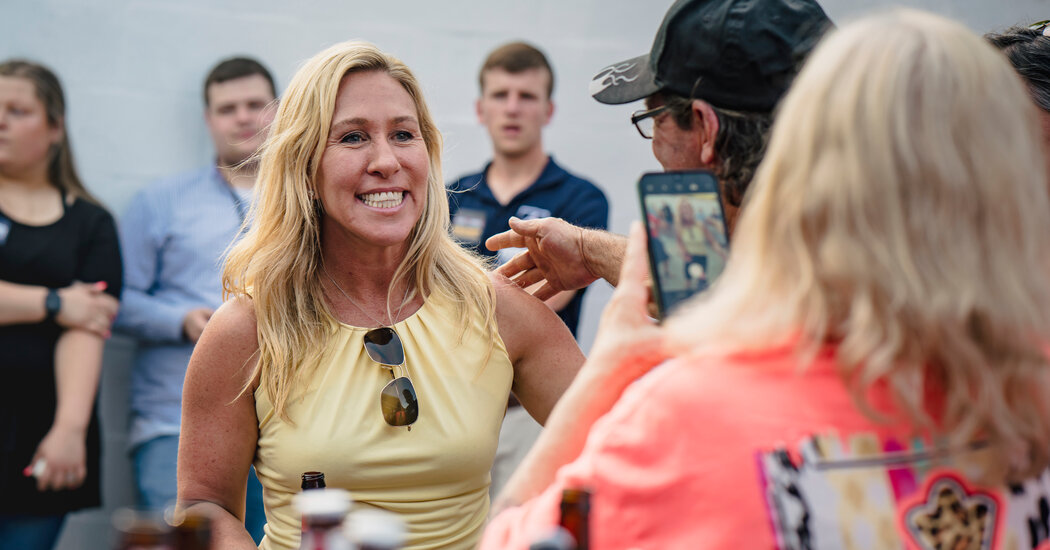 Representative Marjorie Taylor Greene, the far-right Georgia Republican, spent more campaign money on personal security in the early months of 2022 than any other person running for office this year, campaign finance filings show.

From January to May, Ms. Greene spent nearly $183,000 of campaign funds to retain the KaJor Group, a private security company that has also been used by Kyle Rittenhouse, the teenager who shot three men, two fatally, at a 2020 protest against police violence in Kenosha, Wis.

Since January, Ms. Greene, who won the Republican nomination to retain her seat on Tuesday, has made monthly payments of $41,420 to $49,551 to the company, which highlights its ability to “invoke righteousness in the most uncertain and inconceivable of times.”

Before January, Ms. Greene’s operation had spent around $1,000 in campaign money each month on security. During the first quarter of last year, she spent just $4,650 on security. So far this year, she has spent almost 40 times that sum.

Another member of Georgia’s congressional delegation, Senator Raphael Warnock, a Democrat, has spent $170,420, the second-largest amount a political candidate has put toward security so far this year.

Federal candidates’ expenditures on security details have skyrocketed in recent years, mirroring increases in reported threats against lawmakers. Campaigns have spent a record-breaking $4.3 million on personal security since December 2020, according to new data from OpenSecrets, a nonpartisan research group that tracks money in politics. Already this year, campaigns have spent more than $977,000.

From 2017 to 2021, the number of threats made to federal lawmakers doubled, according to data provided to The New York Times by the Capitol Police. Since the end of March, the Capitol Police’s threat assessment division has opened roughly 1,820 cases, putting it on pace to surpass the 9,625 cases it opened last year.

A spokesman for Ms. Greene did not respond to a request for comment. A representative for her campaign told The Daily Beast last month that the congresswoman regularly received threatening messages. In March, a man from Endicott, N.Y., was arrested after the authorities said he left a voice mail message threatening to do “physical harm” to the lawmaker.

“Political discourse tends to have a strong influence on the threat environment,” the Capitol Police said in a statement.

Ms. Greene, a leading right-wing agitator in Congress, has a history of making inflammatory comments herself. Last year, the House voted to strip her of her committee assignments after revelations that she had endorsed social media posts calling for the execution of top Democrats.

The use of campaign money by political candidates to pay for personal security is a fairly new phenomenon. In March 2021, the Federal Election Commission clarified, in response to a request from the Republican Senate and House campaign arms, that hiring “bona fide, legitimate, professional personal security personnel against threats arising from the members’ status as officeholders is a permissible use of campaign funds.”