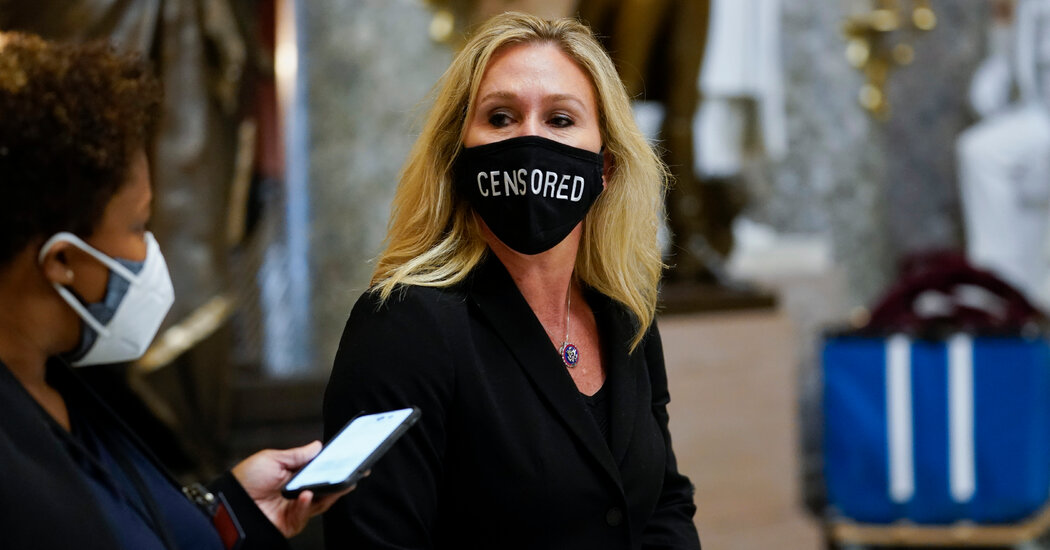 Representative Marjorie Taylor Greene, a first-term Georgia Republican, repeatedly endorsed executing top Democratic politicians on social media before she was elected to Congress, including telling a follower who asked if they could hang former President Barack Obama that the “stage is being set.”

A review of Ms. Greene’s social media accounts, first reported by CNN, found that she repeatedly liked posts on Facebook that discussed the prospect of violence against Democratic lawmakers and employees of the federal government. Ms. Greene liked a Facebook comment in January 2019 that said “a bullet to the head would be quicker” to remove Speaker Nancy Pelosi, and liked another about executing FBI agents.

After a Facebook follower asked Ms. Greene “Now do we get to hang them,” referring to Mr. Obama and Hillary Clinton, the former secretary of state and Democratic presidential nominee, Ms. Greene responded: “Stage is being set. Players are being put in place. We must be patient. This must be done perfectly or liberal judges would let them off.”

In a lengthy statement posted to Twitter on Tuesday before CNN published its report, Ms. Greene did not disavow the posts, but accused CNN of “coming after” her for political reasons and noted that several people had managed her social media accounts.

Ms. Greene has previously been scrutinized for promoting conspiracy theories, including QAnon, the pro-Trump fringe group that falsely claims the existence of a satanic pedophile cult run by top Democrats, and for wrongly suggesting that the deadly school shooting in Parkland, Fla., was staged.

She has repeatedly suggested that Ms. Pelosi should be tried for treason for her refusal to support former President Donald J. Trump’s immigration policies, emphasizing that treason is a crime punishable by death.

In the days before pro-Trump insurrectionists stormed the Capitol on Jan. 6, Ms. Greene referred to the day as Republicans’ “1776 moment.” After the riot, she pledged that Mr. Trump would “remain in office” and that attempts to remove him from the White House constituted “an attack on every American who voted for him,” even though he lost the election.

Ms. Greene’s inflammatory rhetoric has drawn rebukes from some members of her own party. But since she joined Congress, House Republican leaders have declined to condemn her. Before she was elected, Representative Liz Cheney of Wyoming, the No. 3 House Republican, disavowed her comments as “offensive and bigoted,” and Representative Steve Scalise of Louisiana, the No. 2 Republican, went so far as to back Ms. Greene’s primary opponent.

After Ms. Greene arrived on Capitol Hill in November, Representative Kevin McCarthy of California, the minority leader, claimed that Ms. Greene had distanced herself from QAnon.

“So the only thing I would ask for you in the press — these are new members,” Mr. McCarthy said. “Give them an opportunity before you claim what you believe they have done and what they will do.”

A spokesman for Mr. McCarthy told Axios that Ms. Greene’s newly surfaced Facebook posts were “deeply disturbing” and that he planned to “have a conversation” with Ms. Greene about them.