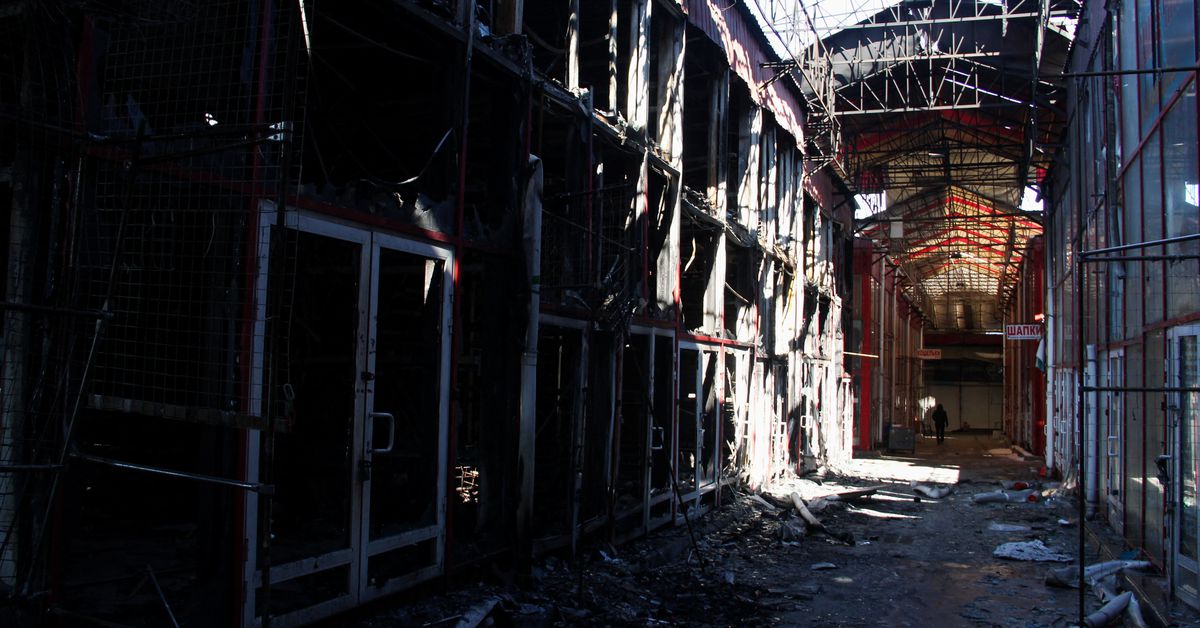 LVIV, Ukraine, March 20 (Reuters) – Ukrainian President Volodymyr Zelenskiy said Russia’s siege of the port city of Mariupol was “a terror that will be remembered for centuries to come”, while local authorities said thousands of residents there had been taken by force across the border.

“Over the past week, several thousand Mariupol residents were deported onto the Russian territory,” the city council said in a statement on its Telegram channel late on Saturday.

The council also said Russian forces bombed a Mariupol art school on Saturday in which 400 residents had taken shelter, but the number of casualties was not yet known.

Reuters could not independently verify the claims.

Many of Mariupol’s 400,000 residents have been trapped for more than two weeks as Russia seeks to take control of the city, which would help secure a land corridor to the Crimea peninsula that Moscow annexed from Ukraine in 2014.

President Vladimir Putin calls the assault on Ukraine, which began on Feb. 24, a “special operation” aimed at demilitarising the country and rooting out people he terms dangerous nationalists.

Western nations call it an aggressive war of choice and have imposed punishing sanctions on Russia aimed at crippling its economy.

The Mariupol bombardment has left buildings in rubble and severed central supplies of electricity, heating and water, according to local authorities. read more

Rescue workers were still searching for survivors in a Mariupol theatre that local authorities say was flattened by Russian air strikes on Wednesday. Russia denies hitting the theatre. read more

Zelenskiy said the siege of Mariupol was a war crime. “To do this to a peaceful city… is a terror that will be remembered for centuries to come,” he said in a late night broadcast.

Still, he said, peace talks with Russia were needed although they were “not easy and pleasant”.

Air raid sirens sounded across Ukrainian cities on Sunday and Russia’s defence ministry said cruise missiles were launched from ships in the Black Sea and Caspian Sea, as well as hypersonic missiles from Crimean airspace.

A general view of market Barabashovo after a fire caused by shelling, as Russia’s invasion of Ukraine continues, in Kharkiv, Ukraine March 19, 2022. REUTERS/Oleksandr Lapshyn

The hypersonic missiles travel faster than five times the speed of sound and their speed, manoeuvrability and altitude make them difficult to track and intercept.

They were deployed by Russia for the first time in Ukraine on Saturday, according to Russia’s Interfax news agency, in a strike which Moscow said destroyed a large underground depot for missiles and aircraft ammunition. read more

A spokesperson for the Ukrainian Air Force Command confirmed the attack in the western Ivano-Frankivsk region, but said the Ukrainian side had no information on the type of missiles used.

Ukraine’s Deputy Prime Minister Iryna Vereshchuk said seven humanitarian corridors would open on Sunday to enable civilians to leave frontline areas. Ukraine has so far evacuated a total of 190,000 people from such areas, Vereshchuk said on Saturday. read more The U.N. human rights office said at least 847 civilians had been killed in Ukraine as of Friday, although it says the real toll is thought to be considerably higher since its monitoring team has not yet been able to verify casualty reports from several badly hit cities. The Ukrainian prosecutor general’s office said that 112 children have been killed.

Russian forces have taken heavy losses since the start of the invasion. Long columns of troops that bore down on the capital Kyiv have been halted in the suburbs.

Zelenskiy’s office said on Sunday Ukraine sees a high risk of an attack launched from Belarus on the Volyn region, which lies to the north of the western city of Lviv. It was not immediately clear whether Ukraine saw the threat of an attack on Volyn from Russian forces or the Belarusian military.

While Belarus is a close ally of Putin’s and has served as a staging post for Russian forces, it has so far not publicly committed troops to supporting Russia. read more

In Syria, some paramilitary fighters say they were ready to deploy to Ukraine to fight in support of their ally Russia but have not yet received instructions to go. read more

Zelenskiy, who has made frequent appeals for more help from abroad, was due to address the Israeli parliament via video link at 1600 GMT. Israeli Prime Minister Naftali Bennett has held numerous calls with both Putin and Zelenskiy in recent weeks in an attempt to assist efforts to resolve the conflict.

The foreign minister of Turkey, another of the several countries that have sought to mediate, said Russia and Ukraine were getting closer to an agreement on “critical” issues and have nearly agreed on some subjects. read more

Mevlut Cavusoglu also said that he was hopeful for a ceasefire if the sides don’t take a step back from the progress they have made toward an agreement.

Russian Foreign Minister Sergei Lavrov said on Saturday that Moscow expected its operation in Ukraine to end with the signing of a comprehensive agreement on security issues, including Ukraine’s neutral status, Interfax reported.

Kyiv and Moscow reported some progress in talks last week toward a political formula that would guarantee Ukraine’s security, while keeping it outside NATO, though each side accused the other of dragging things out. read more

Zelenskiy has said Ukraine could accept international security guarantees that stopped short of its longstanding aim to join NATO. That prospect has been one of Russia’s primary stated concerns.

(Corrects location of Volyn in paragraph 21)