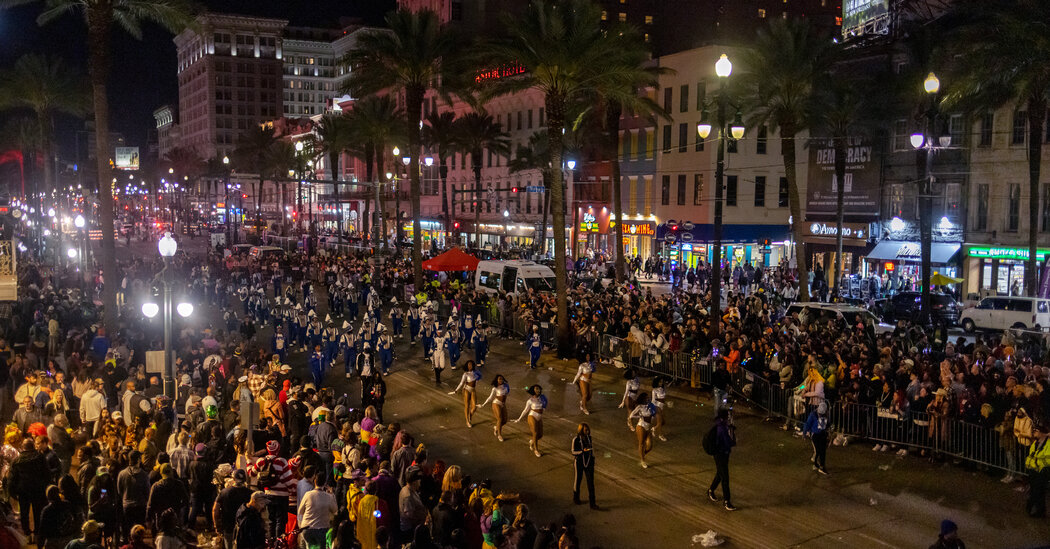 NEW ORLEANS — Jeremy Stevenson didn’t know if he could do it this year.

Normally, Mr. Stevenson, a chief within the New Orleans Mardi Gras Indian tradition, spends an entire year sewing an elaborate suit that pays homage to the Native American tribes who took in people who escaped slavery.

But after the city’s devastating coronavirus spike following Mardi Gras in 2020 and the Covid-related death of his cousin Keelian Boyd last year at age 37, Mr. Stevenson could barely look at the beads and the feathers he needed to make this year’s suit.

Then, last spring, he heard a voice, his cousin’s, telling him, “You’ve got to do this.” He began spending long days sewing while keeping an eye on Covid-19 case counts, wary of any rise that could prompt the city to go into lockdown and cancel Mardi Gras again.

And just after noon on Tuesday, as members of his tribe, the Monogram Hunters, shook their tambourines and beat their drums, Mr. Stevenson emerged from a corner building in the city’s Tremé neighborhood wearing a five-foot-tall crown with five arrows of hot-pink feathers framing his head and a sequined suit of lime green, purple, blue and white, ornamented with crystals from chandeliers, shimmering silver broaches and oval prisms of glass.

“What you see in this suit, shining like jewelry, that’s from Dump’s spirit floating in me,” he said, using Mr. Boyd’s nickname and fighting back tears.

Across New Orleans, in a combination of joy, defiance, trepidation and celebration, Mardi Gras returned on Tuesday with one eye on the pain of the past two years in a city especially hard hit by the pandemic and the other very much looking forward to strutting, parading and moving on.

Last year, all Carnival parades were canceled, and celebrations were scaled back to small, same-household gatherings and decorated porches known as “house floats.” But this month, New Orleans’s Carnival celebration returned in full swing, raising hopes about the city’s resurgence from devastating pandemic losses.

Mary Beth Romig, a spokeswoman with New Orleans & Company, the city’s tourism association, hesitated to estimate the total number of visitors to the city but said that parade routes have been packed every day. “It’s almost like having missed it, people are really clamoring for it and hungry to be out there again,” Ms. Romig said. The city typically sees a million people join in the festivities. Hotels said bookings were approaching prepandemic levels.

The celebration comes as Covid-19 hospitalizations continue to fall from a precipitous Omicron-fueled rise in January. Hospitalizations have dropped to 586 from a high of more than 3,000 in August.

It is too early to say whether that trend will hold: If hospitalizations were going to rise from Mardi Gras celebrations, that would not be evident for at least a week, said Thomas LaVeist, dean of the Tulane University School of Public Health and Tropical Medicine.

Still, Professor LaVeist thought that the event could serve as “an important test,” with impacts far beyond New Orleans. “It will give us all a good idea of what life with Covid could look like — within the new normal,” said Professor LaVeist, who added that he cautiously attended one small parade and wore a medical mask at all times.

For weeks, the town has hummed with the familiar sights and sounds of Carnival. Crowds of mostly tourists, their necks loaded with plastic Mardi Gras beads, have swarmed to the eight-block stretch of Bourbon Street that is lined with bars, restaurants and strip clubs. Bartenders poured quarts of rainbow-colored daiquiris into plastic cups. From overhead balconies, people threw beads down to waiting arms. French Quarter music venues like Preservation Hall sold out several shows a day.

It seemed as though the city had succeeded in forgetting Covid-19.

But beneath the surface, the effects of the pandemic were entwined into all parts of the sprawling celebration. Craft-supply stores struggled to find safety pins, feathers, bolts of satin and boxes of glue from wholesalers struck by backed-up supply chains. Artists and musicians created spectacular Carnival masterpieces dedicated to loved ones lost to the coronavirus.

And not everyone was sure the scramble was worth it.

“I think people were willing to take risks and have Mardi Gras if they could pay their bills,” said Angela Chalk, a New Orleans native who runs a local environmental nonprofit and has a background in public health, noting the economic payoff tourism offers after the financial hit of two slow years. “But give us three weeks. Then we’ll know if the risk was worth it.”

Dr. Jennifer Avegno, director of the department, said she had spent nearly a year consulting with the Centers for Disease Control and Prevention and national public-health experts, hoping to answer one question: “If we have Mardi Gras, how can we make sure it’s not the tragedy it was?” — referring to 2020, when the city became an early pandemic hot spot after the coronavirus spread, unchecked, within unaware, vast crowds.

“Two years ago, Mardi Gras was like free publicity for a germ,” said Glen David Andrews, a jazz trombonist. He recalled the almost-unceasing sound of sirens, as ambulances brought people to hospitals, which soon filled to capacity. Deaths in the city climbed to the highest per capita rate in the nation.

“Nearly everyone I knew was grieving someone,” said Mr. Andrews, who often showed up outside funeral services to play a solo version of “Just a Closer Walk With Thee,” as the coffins of fallen musicians, family members and friends were carried to hearses.

To limit the spread of the virus this Carnival season, Mayor LaToya Cantrell in January reinstated strict mitigation efforts, including an indoor mask mandate and a requirement that anyone who eats, drinks or watches a performance indoors must show proof of vaccination or a recent negative coronavirus test. Krewe members who rode on floats or attended balls had to show similar proof to their captains.

Dr. Avegno and her staff have handed out 20,000 home-testing kits while walking parade routes. A booth by the baggage claim at the New Orleans airport offered vaccinations and tests to arriving visitors. And earlier this month, the city implemented wastewater monitoring in two of its treatment plants, allowing it to track any increases in overall viral levels.

Both Dr. Avegno and Professor LaVeist agree that cases are likely to rise as crowds fill the city’s streets, hotels, restaurants and bars.

Still, despite virus-related concerns and sorrow — or perhaps because of them — crowds seemed happier than ever to be along the St. Charles Avenue route in parades leading up to Mardi Gras day.

This month at Preservation Hall, the managing director, Mike Martinovich, 52, said he felt a “degree of guttural enthusiasm” from performers in recent shows, many of whom had been unable to play indoors in front of crowds for nearly two years.

At midnight on Tuesday, the Bourbon Street party will come to a close with mounted New Orleans Police Department officers, six horses wide, who ceremoniously ride down the street each year followed by the mayor, on foot with a phalanx of police officers.

But for the city’s health department, Mardi Gras won’t be over until all the data is in. The next morning, on Ash Wednesday, all the city’s drive-through and walk-up testing sites will be open and staffed up.

“We want people to be able to test as soon as they feel a sniffle,” Dr. Avegno said, adding, “We expect a bump in cases, but if it’s not a significant bump, the effect on our hospitals will be manageable. And that’s what we’re hoping for.”