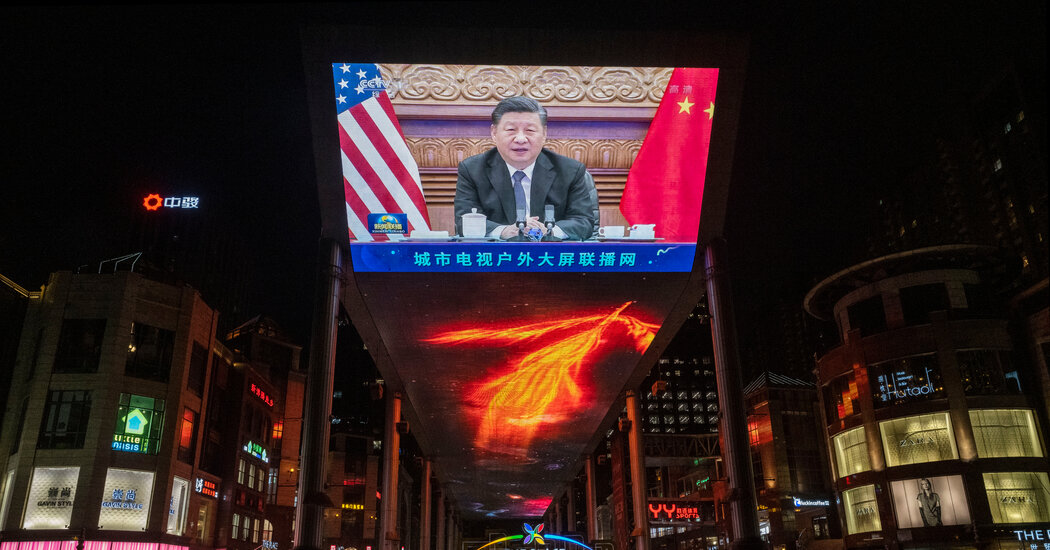 China is already locked in conflict with the United States, the Republican senator from Florida warns. We just haven’t realized it yet.

And even as Vladimir Putin’s assault on Ukraine shows that wars of aggression are no relic of the past — the “return of history,” Rubio calls it — he worries that China’s Communist rulers pose a more insidious, long-term danger to America’s peace and prosperity, and that the threat isn’t being treated with the seriousness it deserves.

“It does us no good to pretend they’re not an adversary,” Rubio said in an interview. “Their goal is to rise at the expense of the United States.”

As the top Republican on the Senate Select Intelligence Committee, Rubio has access to the latest insights from U.S. spy agencies. And what he has seen of China’s growing reach has alarmed him: a campaign of economic espionage and infiltration of American institutions; a rapid buildup of nuclear and conventional forces that menace Taiwan; an expanding disinformation machine that seeks to undermine the U.S. all over the world.

Those concerns are widely shared by Democrats in Washington. Since taking office, the Biden administration has taken steps to bolster America’s alliances in Asia, reoriented NATO toward confronting China, approved nearly $1 billion in arms sales to Taiwan, hit Chinese officials with sanctions, and sharply criticized China’s human rights policies and trade practices. Congress is busy finalizing the COMPETES Act, a mammoth piece of legislation both parties have framed as vital to countering China. But if Republicans take control of Congress in November, they will be in position to push for an even harder line.

On Tuesday, Rubio will give a speech at the conservative Heritage Foundation, in which he plans to argue that “Beijing’s military might, ideological challenge to democracy, technological ambitions and influence over the global market pose an even more serious and systematic threat than the Soviet Union ever did.”

Winning that conflict blinded Americans to the dark reality of totalitarianism, in Rubio’s telling. “Over the past three decades, we forgot that human nature tends toward a lust for domination,” read portions of his remarks that were shared with The New York Times. “The desire of the powerful to conquer, enslave and control those weaker than themselves.”

What America needs above all else, Rubio argues, is “unity and clarity about the threat we face.”

The speech is a forceful entry into the debate in Washington and among Republicans over how to deal with Beijing. How much emphasis should U.S. leaders place on Russia versus China? Is China an adversary to be combated or merely a fierce competitor? Is the United States losing its edge? And, if so, what is to be done about it?

Rubio’s own Twitter feed embodies the competing demands on policymakers’ attention. Even as he hones his arguments on China, he’s been live-tweeting his insights on the war in Ukraine.

“Republicans are wrestling with whether and how to prioritize these threats,” said Elbridge Colby, who was a senior defense official in the Trump administration. “But the truth is that we’re not just going to rewind the clock to 1989 and everything’s going to be like the old days.”

A drive to out-hawk the hawks

Republicans may be divided on Russia — between mainstream national security hawks and a smaller faction that admires Putin’s perceived toughness and his defense of traditional values — but criticizing China is a surefire political winner on the right.

In a poll conducted last year, nearly half of Americans said they viewed China as the greatest enemy of the United States, a number double what it was 2020. In a survey last year by the Chicago Council on Global Affairs, 64 percent of Republicans said the United States should try to limit China’s rise, whereas 60 percent of Democrats said they preferred cooperation and engagement.

“Republicans are very negative toward China, more so than Democrats,” said Glen Bolger, a Republican pollster. He noted that the coronavirus pandemic had fueled growing skepticism of China and its role in the world.

China is already proving to be a potent campaign issue in the 2022 midterms, as Republican politicians try to out-hawk one another in primaries for congressional seats. In Midwestern states hobbled by the loss of manufacturing jobs, it’s a domestic policy topic as much as it is a national security concern.

In Ohio, Mike Gibbons, a businessman who is leading the Senate Republican primary in some polls, is fending off allegations that he once favored outsourcing jobs to China.

In Pennsylvania’s Senate race, David McCormick, a former hedge fund executive, and Mehmet Oz, the celebrity doctor, are trading accusations over who is more tainted by Beijing.

For Rubio, his first task is to get re-elected in Florida this year. But he has run for president once before, and allies expect he may do so again. So his bid to lay down a marker on China is bound to raise questions about his ambitions for 2024.

A rival the U.S. is highly dependent on

If China’s a more serious geopolitical threat than the Soviet Union, it’s also a more complex one.

Americans traded more than $600 billion worth of goods and services with China in 2020 alone, dwarfing the amount the United States ever exchanged with the Soviets. The U.S. also depends on China for raw materials like rare earth minerals, used in everything from mobile phones to semiconductors to car batteries. And Beijing’s cooperation is essential to making progress on climate change, Biden administration officials emphasize.

In the event of a war over Taiwan, Rubio said, “It won’t be as easy to sanction China as it was to sanction Putin.” Not only can China wield far greater military and financial muscle than Russia, but American elites are also more deeply compromised by their ties to Beijing, he argued.

“China’s been very effective at deputizing the American corporate sector as their lobbyists,” Rubio said. It’s something he says he experienced firsthand when he pushed for sanctions over China’s treatment of its Muslim minority.

The administration has resisted labeling China as an outright enemy, even as it steps up its criticism of the Chinese government. During his speech last year to the U.N. General Assembly, President Biden said, “We are not seeking a new Cold War or a world divided into rigid blocs.”

But the White House’s actions suggest otherwise. The budget it released today mentions China 12 times, referring to the country as a “pacing challenge.” It calls for a Pentagon budget of $773 billion — a record that eclipses the Trump administration’s spending on the military.

Tough on crime. The budget contains billions in requests for federal law enforcement, including $17.4 billion to combat violent crime and more than $30 billion in grants to state and local police departments. There’s also a 5 percent increase for various Homeland Security initiatives. As Katie Benner notes, the message here is pretty simple: Biden does not want to defund the police.

Tough on defense. All told, Biden is asking for $813.3 billion in national security spending, a 4 percent bump from 2022. Much of the new money would go to counter threats from China, Iran and Russia. As Michael Shear notes, it’s a far cry from the peace dividend progressives expected from the U.S. withdrawal from Afghanistan.

Tough on the wealthy. Biden is proposing a minimum tax on American households worth more than $100 million, an idea in line with what progressives like Bernie Sanders and Elizabeth Warren have championed. Zolan Kanno-Youngs breaks it down here.