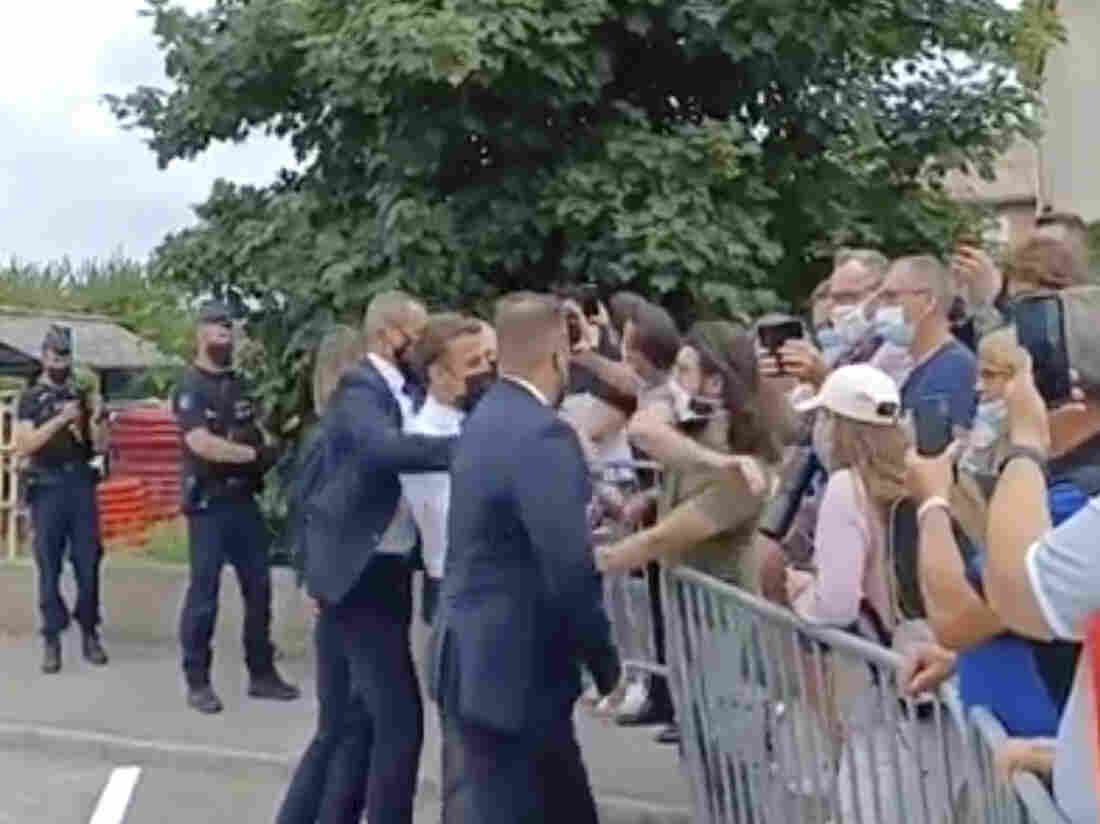 In this grab taken from video, France’s President Emmanuel Macron is slapped by a man, in green T-shirt, during a visit to Tain-l’Hermitage on Tuesday. BFM TV /AP hide caption 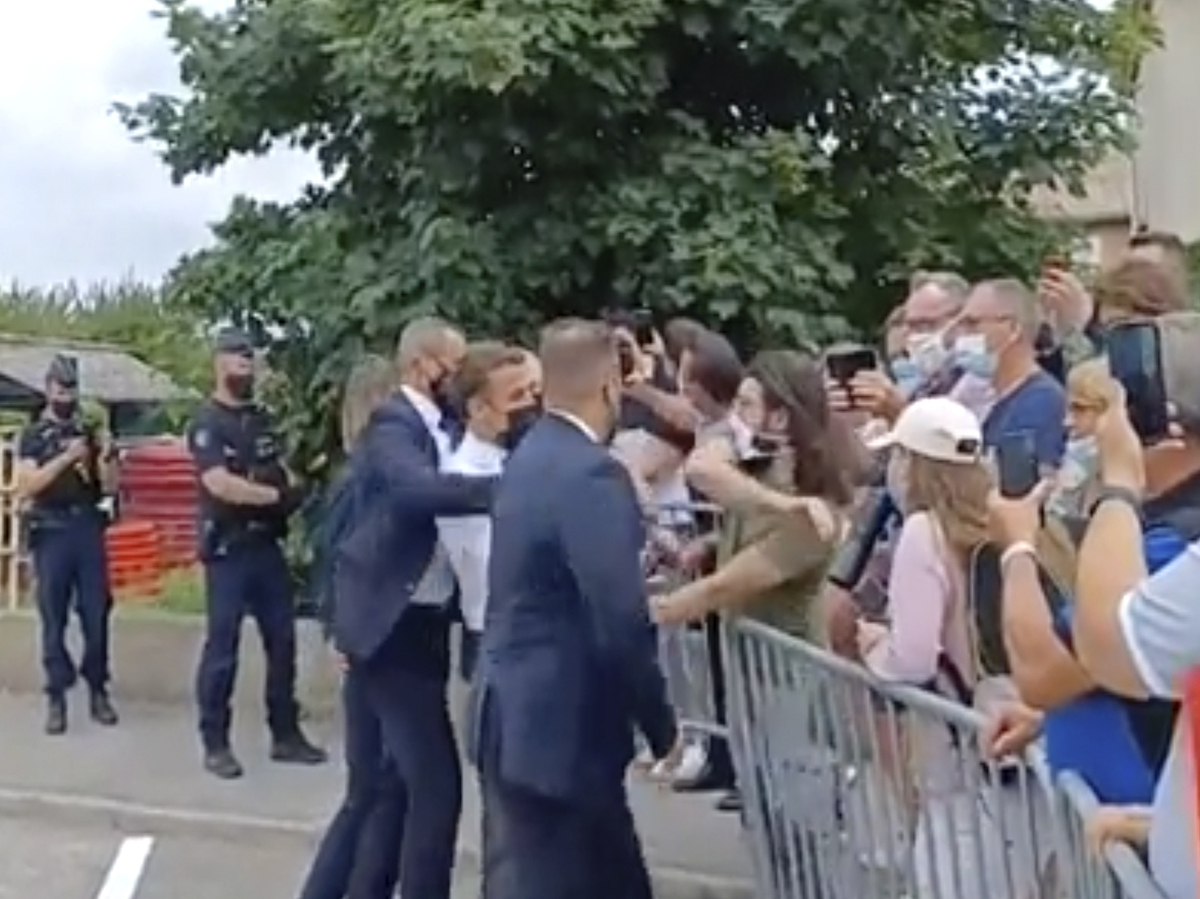 In this grab taken from video, France’s President Emmanuel Macron is slapped by a man, in green T-shirt, during a visit to Tain-l’Hermitage on Tuesday.

VALENCE, France (AP) — A 28-year-old Frenchman who described himself as a right-wing or extreme-right “patriot” was sentenced to four months in prison Thursday for slapping President Emmanuel Macron in the face.

Damien Tarel was also banned from ever holding public office in France and from owning weapons for five years over the swipe Tuesday, which caught Macron’s left cheek with an audible thwack as the French leader was greeting a crowd.

During Thursday’s trial, Tarel testified that the attack was impulsive and unplanned, and prompted by anger at France’s “decline.”

He sat straight and showed no emotion as the court in the southeastern city of Valence convicted him on a charge of violence against a person invested with public authority. He was sentenced to four months in prison and handed an additional 14-month suspended sentence. His girlfriend broke down in tears.

Tarel, who shouted a centuries-old royalist war cry as he hit the president, described himself as a right-wing or extreme-right “patriot” and member of the yellow vest economic protest movement that shook Macron’s presidency in 2018 and 2019.

Poised and calm, he firmly defended his action and his views on Macron, without providing details of what policies he wants France to change.

Tarel acknowledged hitting the president with a “rather violent” slap. “When I saw his friendly, lying look, I felt disgust, and I had a violent reaction,” he told the court. “It was an impulsive reaction… I was surprised myself by the violence.”

While he said he and his friends had considered bringing an egg or a cream pie to throw at the president, he said they dropped the idea — and insisted that the slap wasn’t premeditated.

“I think that Emmanuel Macron represents the decline of our country,” he said, without explaining what he meant.

He told investigators that he held right- or ultra-right political convictions without being a member of a party or group, according to the prosecutor’s office.

The slap called attention to an assortment of ultra-right groups bubbling beneath France’s political landscape, which are considered increasingly dangerous despite their small following.

Macron wouldn’t comment Thursday on the trial, but insisted that “nothing justifies violence in a democratic society, ever.”

“It’s not such a big deal to get a slap when you go toward a crowd to say hello to some people who were waiting for a long time,” he said in an interview with broadcaster BFM-TV. “We must not make that stupid and violent act more important than it is.”

At the same time, the president added, “we must not make it banal, because anyone with public authority is entitled to respect.”

Another man arrested in the ruckus that followed the slap, identified by the prosecutor as Arthur C., will be judged at a later date, in 2022, for illegal possession of weapons.

The prosecutor’s office said as well as finding weapons, police who searched the home of Arthur C. also found books on the art of war, a copy of Adolf Hitler’s manifesto “Mein Kampf,” and two flags, one symbolizing Communists and another of the Russian revolution.

Neither Tarel nor Arthur C., also 28, had police records, the prosecutor said.

While crimes in France often take months or years to reach trial, in this case authorities used a special emergency procedure to hold a trial within just two days of the slap. Tarel did not object to the procedure.

Videos showed Macron’s attacker slapping the French leader’s left cheek and his bodyguards pushing the man away during a quick meet-and-greet with members of the public, who were kept back behind traffic barriers in the winemaking town of Tain-l’Hermitage.

The attacker was heard to cry out “Montjoie! Saint Denis!” a centuries-old royalist war cry, before finishing with “A bas la Macronie,” or “Down with Macron.”